They are not called the “Flash” for no reason. Kent State’s entire offensive outfit relies on tempo to create confusion and discomfort in defenses. Because of this, offensive line coach Bill O’Boyle teaches his entire offensive line to pull (that includes Centers). And while there may only be two types of pulls in his system- slow pulls and check pulls- it’s the continual repetition of these two techniques that has vaulted Kent State into the top five every season in rushing yards per game.

In this clinic report, we profile the techniques behind both of these pulls including the drill work Coach O’Boyle uses on a daily bases with this unit. And while backside pulls are essentially in this offense, it’s important to understand that the play side of these concepts are referred to as “gapping units,” where players work in unison to horizontally eliminate any movement across the front. At Kent State, all gap concepts are treated as A-gap plays. “Nobody crosses our face in a gapping unit,” Coach O’Boyle told me. “Everything is considering an A gap entry point and we always chase it back.”

The ball carrier runs his track to the hip of the Center as he would in tight zone. He told me that running backs know exactly where the ball is going to hit, and very rarely will it bounce into the B gap. “If we it does go into the B gap it will be in a goal line situation where we have bigger personnel and more numbers on that side so it can hit wider,” he said.

The Down Block Fundamental:  “Violence on a 45”

The gapping unit starts with the down block to protect the inside gap. But rather than teach a play side open step as some coaches do, Coach O’Boyle teaches what he calls an open foot movement with the inside foot to protect any potential movement across the line of scrimmage. Coach O’Boyle calls it “opening the knee.” “We want to swing the knee open, with the purpose of our momentum and strong base getting defenders upfield,” he said. “We have to be able to adjust off the drive block.” 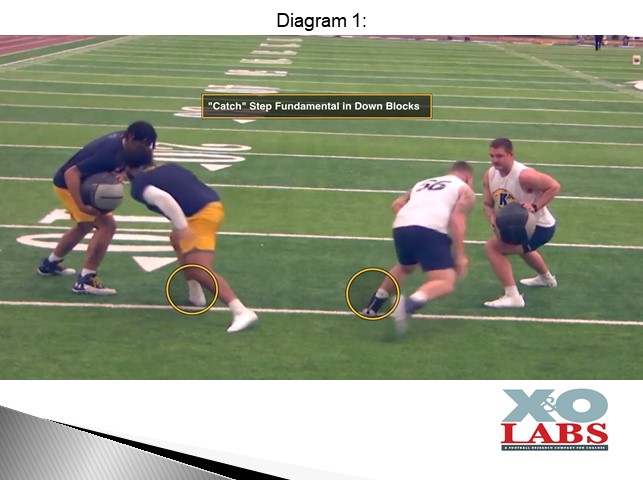 He used to teach a drive step but that step became too narrow, forcing the second step to crossover allowing a defender to backdoor the block. “If they step, then they lock the hip and wind up crossing over. By the time you make contact you give the defensive lineman a two way go. He can go upfield or underneath me. I wind up turning my shoulders and he can back door me.” And as far as strike point goes, Coach O’Boyle teaches a shoulder tip to chin landmark on defender, no hands. “We talk about not letting our face leave the jersey of the defender,” he said. “We want to knock the hips two gaps across our face.” In order to drill this, he’ll have a defender place a med ball on his hip so that lineman can use their backside hand as a “thumb lift” to  knock it vertically on a 45-degree angle. Coach O’Boyle calls this a launch, to simulate ripping a sink out of the wall. 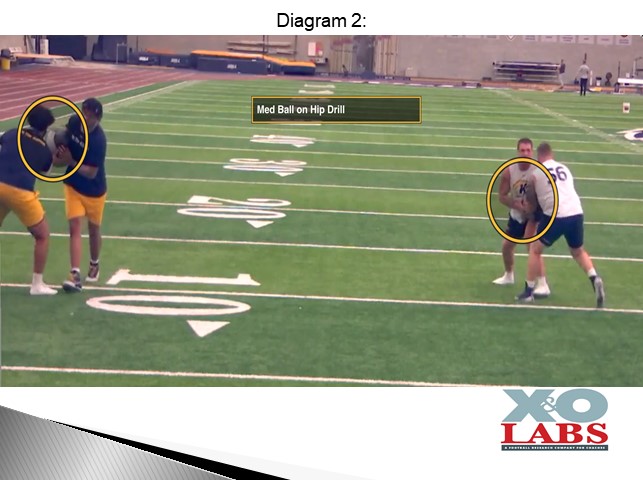