Like many offenses, Harvard relied on using more detached (Y-Off) roles for its tight on gap schemes. But during his off-season study this winter, offensive line coach Keegan Kennedy realized how much defenses were relying on keying that Y-off to rock back and fit split zone and counter schemes. So, he spent the majority of spring ball teaching the Y to pull from a grounded or attached position and found that defenses were rarely keyed in to him when he was on the line of scrimmage. “We find it to be a great advantage,” coach Kennedy told me. “ We wound up loving to pull the tight end from an on the ball alignment. Our tight ends are super athletic but they have to be good enough to run things in the box.”

And as defenses continue to spill the counter scheme, the offensive staff works tirelessly to protect its counter concept by pulling the Center, Guard, Tackle and Tight End depending on the front. This report focuses on the build-ins that Harvard has used depending on the defensive front presented. Most of these adjustments are built into the play call or a communicated adjustment at the line of scrimmage.

Before getting into the specifics of the tight end roles, Harvard will use many of these counter concepts with a same-side mesh with the running back. It’s helped get second level movement, allowing for angles on down blocks play side. Running back coach Saj Thakkar uses the term “walk it out” for the back and it’s the exact same mesh as inside zone for the first three steps.

The first step is a 45 degree open step with the foot near the quarterback. The second step is a cross over into the mesh followed by a plant on the third step. “Off the plant step, we redirect to our landmark which is the play side leg of the C gap,” said Coach Thakkar. “It’s really slow, but needs to be used to get in phase with second puller.” 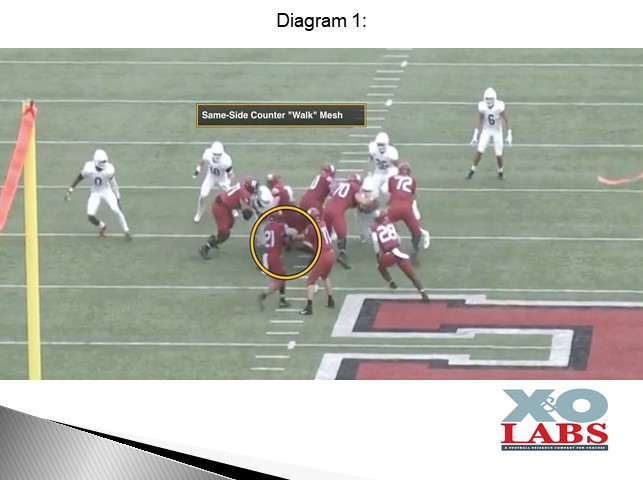 Harvard will also use a Pistol mesh with counter schemes. The idea is to get the back’s shoulders squared and get downhill at the A gap entry point. The QB will open at 6 o’clock and reverse out while the running back will shuffle play side then get vertical. Coach Kennedy did emphasize that in order for this mesh to work, the back has to have good enough vision to pick up the second puller. “It’s a good answer against teams that will box and not spill the first puller, so the back can get right up into the line of scrimmage,” he said. 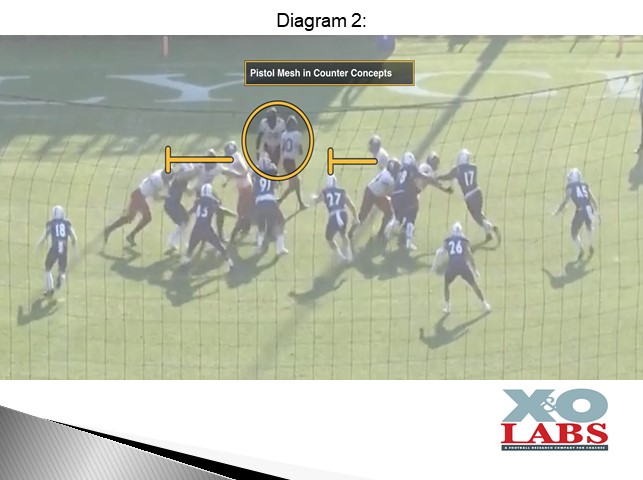