While the feet come first, the hands come second. In this case, we researched the various ways in which offensive line coaches were teaching the placement and strike force of the hands in pass protection. Some taught breastplate aiming points, while others taught armpit aiming points.

This section is devoted to the techniques and drill work associated with hand placement in man pass protection. Before we delve into the techniques these coaches use and the drill work that corresponds with it, a brief background on who our contributors are:

We started our research by asking a generic question. Our contributors’ responses are marked with their initials below:

MK: What coaching points do you emphasize to teach the hands of offensive linemen in pass protection?

BC: “We try to have a quarter sized target on the inside number of defenders to eliminate any distractions and so that we are less susceptible to head bobs, etc. We will get elite at stabbing and punching before anything else. If I can’t punch, it doesn’t make a difference what he does. We talk about ‘set and stab’ as the hat and hands in the actual set of the offensive lineman. The stab is the punch from the hands. The coaching points are thumbs up and elbows close to the body. We want the hands on each number of the opponent’s jersey. We want to strike upward blows with the hands. I want to get a slight upward blow with a partial roll of the hips. We want to sit and separate from the defender. We do not want the defender grabbing the offensive lineman.”

CB: “We talk more about the hands than the feet. We talk about, of course, being lower than our opponents on the initial set. We don’t use a specific landmark for the hands although we do try to get them in the breastplate. Instead, we emphasize our hands touching each other. As long as they touch, that gives us a good frame of reference for the punch (Diagram 14).” 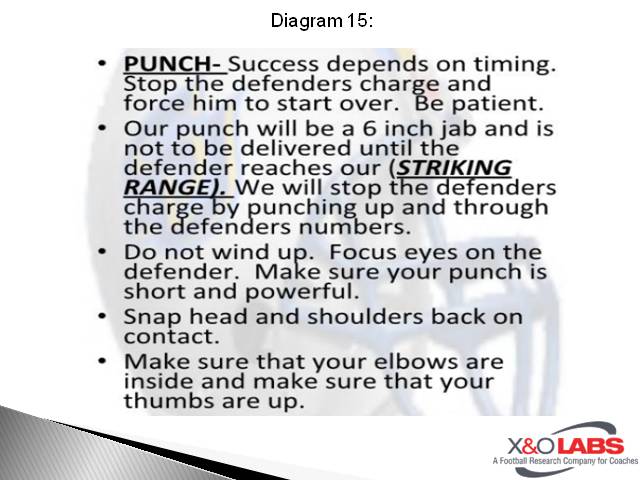 JS: “We want to play long to increase our striking radius and protect our chest. To us, the definition of long is to get our hands on the defender first before you get your head or shoulder on him. If you anchor your hands quickly and properly, you may not have to apply your head or shoulder. When your hands are anchored to the man and your feet are rooted to the ground, you can transfer force to him in order to affect change. Stability is the function of posture, equilibrium, roots and anchors, while instability is usually created by taking big steps or having too narrow of a base. Our goal is to change the opponent by destabilizing him. We want to ‘push him into the pool’ without falling into the pool ourselves.