When we initially began conducting our research on this topic, we were presented with a dilemma. We knew both the hands and feet were vital in pass protection, but we were curious to see which of these two components offensive line coaches placed more of an emphasis on. Of the ten contributors in this study, almost all of them suggested that the feet are more important than the hands and the reasoning is simple: The feet put an offensive lineman in the best position to stop an inside or an outside charge in man pass protection. While many offensive line coaches teach different techniques on the punch, the footwork to get him there remains vital. We started our research process by asking our contributors what the most important techniques are when coaching the feet in pass protection. Before we delve into the techniques these coaches use and the drill work that corresponds with it, a brief background on who our contributors are:

We started by asking a general question on footwork. Our contributors’ responses are categorized by their initials.

MK: What are some of the most important coaching points you emphasize when teaching the feet of offensive lineman in pass protection?

Head Up Alignment (Diagram 1): Here the offensive line short sets to the inside and takes away the inside charge of the defender. The inside power foot is moved about six inches to the inside to secure the inside against the rush that way. 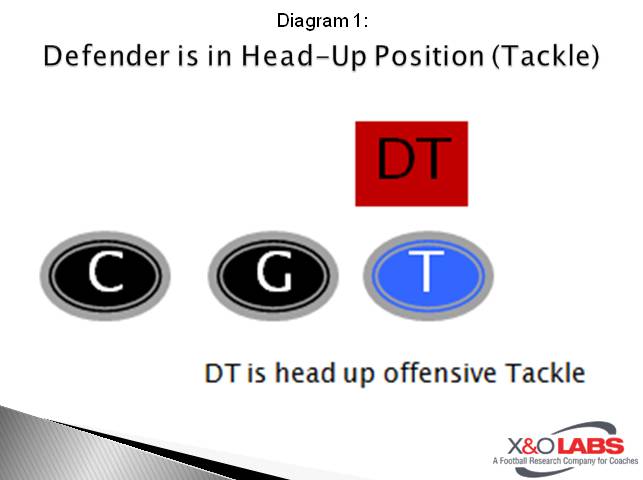 Outside Eye Alignment (Diagram 2): Here the offensive lineman moves his feet in the set but he doesn’t travel with the foot movement. He picks up the power foot, puts it down in the same spot and takes the defender in a short set. With the outside eye defender, the tackle is already in the right aiming point and doesn’t change his alignment. On an outside eye alignment, the tackle will vertical set and work the line. The line is the imaginary line drawn on the outside foot of the tackle seven yards deep. The tackle kicks one step straight back with his outside foot and drags the inside power foot. This allows the offensive tackle to react to the defenders movement inside. If there is no inside move, the tackle kicks again down the line. It gives him enough depth so he will not turn before the defensive end passes the quarterback’s set point. If he gives too much width as he works down the line, he gives up the inside and lets the defender have a two-way go. Giving up too much width allows the defenders to run twist stunts more effectively. 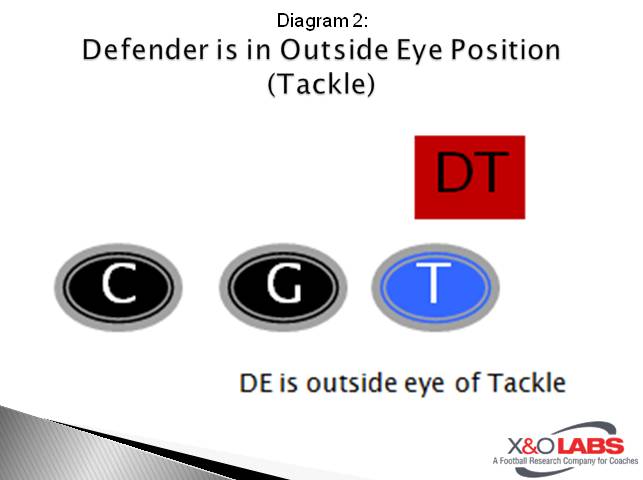 Outside Shoulder Alignment (Diagram 3): Here the blocker sets short and outside and makes sure he does not give up an inside gap with his set. If he sets too wide, he gives up the inside gap to a counter move. The set is a step drop and skate back for the tackle. Tackle still works the line here. He takes two steps straight back and repeats that movement as he retreats. In the eye alignment, he sets one step because of the inside threat movement.