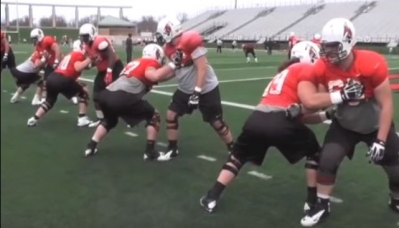 According to John Strollo, the offensive line coach at Ball State University, force can be produced in three ways: push (straighten limbs to expel), pull (flex limbs together) and torque (twist trunk to throw). So, Coach Strollo made a commitment last season to focus on the torque movement and play with one hand foremost in pass protection. As he told us, “every sport is played with one foot foremost and one hand foremost including football. Most are, except for offensive linemen and weightlifting.” Coach Strollo found that linemen seldom move anyone with their punch. They can more effectively move him with their trunk, their legs and their hips. In order to do this, Coach Strollo teaches his players to use two hands to precisely apply force to a defender. One hand is foremost and anchors to the opponent while the other hand is held back. The coaching points of the circular force drill are below (Diagram 16).