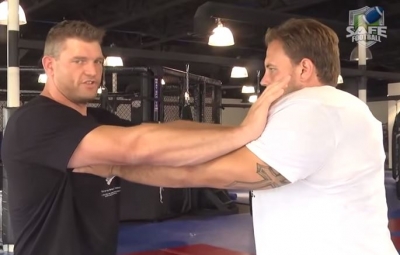 Scott Peters spent seven years in the NFL with the Philadelphia Eagles and New York Giants before launching Fight Ready, a Mixed Martial Arts Academy in Scottsdale, Arizona where he trained the likes of Cain Velasquez and Brock Lesnar. He has since started the “Tip of the Spear” leverage program, which incorporates MMA leverage techniques to help offensive linemen in the use of run and pass blocking. Peters’ program has been implemented by over 400 football programs at every level. His methods have been touted by former NFL offensive line coaches Jim McNally and Bob Wylie every year at the C.O.O.L. clinic in Cincinnati. He begins our in-season trouble shooting series with a Q and A with X&O Labs Senior Research Manager Mike Kuchar on techniques that offensive linemen can use to protect themselves against the ever-popular and ever evolving bull rush.

MK: Why did you decide to start safe football? What motivates you to spread this information to football coaches?

SP: I love football and what it can offer to young athletes developmentally. Concussions and sub-concussive head trauma remains a serious threat to the game’s future, but more importantly, the welfare of the young men who play it. I had a lot of unnecessary concussions when I played due to poor or limited technical information available to me, and I feel strongly about raising the collective level of knowledge to bring confidence back to the game. Ultimately Safe Football exists to empower players to take safety into their own hands through the development of superior technical skill, and this can only be achieved through the leadership of coaches.

While the public waits for answers from doctors, helmet companies and football organizations, Safe Football has teamed up with the true leadership (football coaches) to influence necessary changes to protect the game and its players. We believe this is particularly important at the youth and high school levels, where the majority of football is played.

Through my experiences in MMA, I discovered certain movement patterns and postures that yielded exceptional strength of the body, which indirectly correlates to football. In 2011, I began developing football techniques based on those leverage principles, emphasizing the use of hands to transfer force by using the body as it was designed to move from a biomechanical standpoint.

In 2012 and 2013, I was hired by the University of Washington to teach their players my techniques (and drills), which were later credited by the coaching staff for their success on both sides of the ball. In 2013, running back Bishop Sankey set the single season rushing record in school history, and in the same year the athletic trainers confirmed zero reported concussions or neck stingers among their offensive and defense linemen; the first time this has happened in recorded history according to UW medical personnel.

Although “bigger, faster and stronger” is still the mainstream approach to player improvement in the off-season, more and more teams, coaches and organizations from youth to the NFL are recognizing the need for football specific skill development. Over 400 coaching staffs from youth and high school to the NFL have adopted the Safe Football curriculum, which provides them a detailed and comprehensive technical instruction plan along with over 200 drills designed to expedite skill development. With the constant advancements in technology, it seems we've lost sight of the importance of human interaction and hands on teaching. Safe Football is here to partner with coaches in every community where football is played to advance technical mastery to save the Game of football and to do it on our terms in a proactive manner, as opposed to accepting undesirable policy.

Mike Kuchar (MK): Why do you think the bull rush move continues to be a popular move among pass rushers at all levels of football?

Scott Peters (SP): Great question; there are a couple of reasons the bull rush is still a staple move for players at all levels. The first reason is its simplicity as a pass rush. I think youth, high school and many college players use the bull rush because they lack the technical know-how to win using finesse moves. In the case of less experienced defensive linemen, they know there are 3 potential routes to the quarterback: 1. Left 2. Right or 3. Down the middle. The bull rush is the most obvious pass rush for most beginners, and it is for this reason it is widely used at all levels. The second reason the bull rush remains a popular move is because it works. Take for example two inexperienced players of equal size, strength and athletic ability (one offensive and one defensive lineman), and line them up in a 1 on 1 pass rush drill. Who wins? Defenders have the advantage of momentum and vision into the backfield when it comes to 1 on 1 pass rush situations. Offensive linemen are asked to stop penetration from a charging defender while doing a glorified backpedal, and this takes a high degree of skill, which in turn takes knowledge and time to develop, also giving rise to the popularity of the bull rush.

The third reason the bull rush remains a popular move is understood by higher level defensive linemen, and that it is used to set up pass blockers for speed or finesse moves. I teach defensive linemen to develop explosive, shocking power with their hands before developing advanced finesse or disengagement techniques, because of the physically and psychologically disruptive threat it presents to offensive linemen. I think of the bull-rush like a fastball in baseball. It's the first pitch a pitcher learns. If you have a good fastball, you can add a curve, slider, or change-up. When a pitcher comes with a high velocity fast ball, the batter has to get everything moving a little faster to initiate his swing and get the bat around. A hitter has to hold his water when he sees the change up or curve ball, which is difficult to do. This is paralleled with the pass rusher who shows a formidable power rush early in a game. The typical outcome from offensive linemen is loss of balance and posture to combat the power. Intuitively, pass blockers will lean on defenders when attempting to stop their bull rush, opening the door for other moves. This is the synergistic value of having a multidimensional repertoire of pass rush moves.