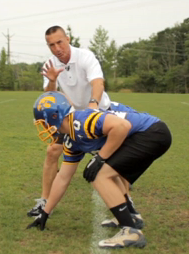 When I was a high school football player in New Jersey, I played on an O-Line that had a Strong Side and a Pulling Side.  Big, Strong, less mobile players played on the Strong Side while smaller, quicker players played on the Pulling Side.  They would switch from Right side to Left side depending on the play and the direction of the play.  It was a good idea in concept but was very confusing for us players, especially for me as a Center.  I never knew which side was which or which way the play was going.  I knew Power was run to the Strong Side and I had to block back for the Pulling Guard; but I was consumed with figuring out whether it was going right or left, before even snapping the ball.  It was paralysis by analysis.

But the reason this concept is good in high school football is due to the diversity of body types on a starting offensive line.  This applies to youth football and some small college football programs as well.  You may have the 6-4, 290 pound Tackle who is not athletic on one side and a 6-1 190 pound Tackle on the other side whom is very athletic.  You don’t want the big guy pulling as a lead blocker and clogging up the hole nor do you want the athletic guy drive blocking at the point of attack.  The answer is to simple compartmentalize your offensive line.

Put your big, strong, drive blockers on the right side of your O-Line and the smaller, quicker blockers on the left side.  Now run the schemes that best suit those players in those positions.  Run your man schemes (Iso, Draw & Counter) to the right.  This allows your best drive blockers to go 1-on-1 vs the defensive tackle and the defensive end.  On the counter play, it also allows the athletic Tackle to pull as a lead blocker to the play side.  Run your Zone schemes (Inside Zone, Mid Zone & Outside Zone/Toss) to the left side.  This affords you the opportunity to run to the left with the smaller more athletic linemen (including the Tight End) in zone combination blocks.  This also allows the running back to read their blocks and make cuts off of them.  With the man schemes, there is a defined point of attack.  Defenders need to be driven by or covered up by big, strong linemen.  Zone schemes allow the running back to make cuts off of defensive flow.  Linemen only need to stay on the defender who is laterally displacing himself.