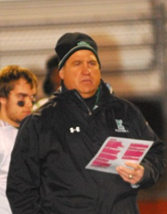 Editor's Note: Coach Sedmak is presently entering his second year as Offensive Coordinator at Edina High School, a suburb of Minneapolis, MN. Prior to Edina, he was the head coach at Mason High School, and at Shaker Heights High School in the suburbs of Cleveland, Ohio for 13 seasons (99-40 record). Coach Sedmak has had offensive linemen earn scholarships and go onto play at Ohio State, Michigan State, Penn State, Louisville, University of Toledo, Miami University (OH), University at Buffalo and Northeastern University, among others. Three of those went onto make NFL rosters.

As a high school football coach for over thirty years at five different public high schools in three metropolitan areas (Cleveland, Cincinnati, Minneapolis), I’ve always found building a competent offensive line can be very challenging. Although more kids play high school football than any other single sport, they don’t grow up in the back yard blocking people. The fun of football to a youngster is the throwing, catching, or running with the ball. If a kid is really aggressive, he may enjoy tackling, but he’s not running around saying "I want to play offensive guard."

Additionally, if one has never actually played offensive line, he has no idea what it is like to play there. It is physically difficult, in that the lineman is himself moving and attempting to use his strength to move someone, his size or larger, on many consecutive plays. It is mentally difficult, because the lineman must know whom to block, how to block him, and on a variety of different plays with the defense rarely in the same spot two plays in a row. Most difficult is the emotional challenge – never being allowed to fulfill those desires that were most fun as a youth (playing with the ball itself) and receiving much criticism if the offense doesn’t move the ball, and receiving little recognition when the offense does move the ball well.

Quite frankly, an offensive line may face all/some of the following obstacles in one season:

Of the five high schools where I’ve coached, four were in the division or classification that included the state’s largest schools and suburbs of large cities. I can only imagine how much more difficult the problems are in small schools (with less potential players) or in rural areas (where theoretically it is tougher to build a coaching staff).

However, success for a football team cannot exist without a good offensive line. Fortunately there are solutions to each of the obstacles, all of which I’ve listed below.

1) Potential lack of players with the size to be competent varsity linemen:

A lack of "big enough" linemen can be rectified by utilizing gap blocking schemes and by pulling and trapping. Emphasizing the quickness of the first step and building size in the weight room are obvious benefits, as well as allowing the linemen to "play fast" by limiting the analysis of blocking assignments each play. I follow the mantra "keep it simple" because "cloudy" minds equal slow feet.