“The Foster 5” – Innovation 5: The Face Read Fundamental to Defend QBR and “Plus One” Run Game

"Offenses now continue to negate your speed players by manipulating them. So, we continually had to find ways in allowing our players to play fast and attack the offense."
- Bud Foster, former Defensive Coordinator, Virginia Tech University

The Ideology: Cleans Reads so LB’s can Play Fast

Bud Foster had opportunities to coach positions other than linebacker, he simply chose not to. After all, these were his babies. And he knew they were the pulse of his defense. Ask him who his favorites were and names like Vince Hall, Xavier Adibi, Andrew Motuapuaka and current Hokie Dax Hollifield are some of the first names he mentions. While Penn State may be linebacker U, few programs have had the stardom at the second level then Tech. But there were two reasons for it: one, they had Bud Foster coaching them every day and two, the entire scheme was designed to allow them the freedom to make plays. The premise of the Hokie defense has continually been to stop the run game first. This became a necessity to use all eleven defenders in doing so, particularly in this day and with the running quarterback. So, in order to have these linebackers free to run down plays, he had to take as much responsibility off them as possible. In his scheme there were always build-in force and cutback defenders to protect linebackers who can go run and make plays. “I’ve always had linebackers be able to fast flow with cutback players to help them,” he told me. “I always wanted to turn combination blocks into single blocks right now. I wanted to dictate to the offense.” The premise was to continually have one more defender than an offense can block. “Teams like the Al Groh Virginia teams would change their entire offense by running wildcat when they played us because they thought they would have an extra hat in the run game,” he said. “We believed in not giving up explosive plays in the run game. Over the years we’ve been good because we’ve allowed teams to be one dimensional.”

His entire defensive system is built around diagnosing concepts quickly and triggering fast. But in order to do that he relied on teaching a linear, universal method to all second level defenders. By loading the box, up to seven defenders can have run responsibilities on each play. In order to get all this taught he had to conceptualize it by teaching base principles that can be applied to any second level defender.

This teaching is summarized below:

In order to keep reads clean for his linebackers, Coach Foster taught three distinct reads that were universally taught to any second level defender. These coincide with their primary, then secondary gap responsibility: 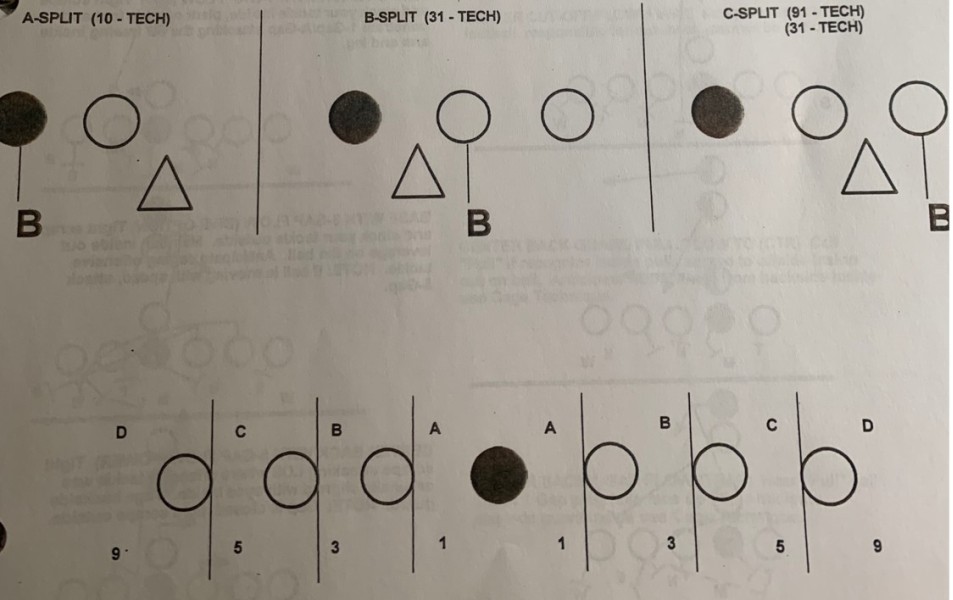 Any second level defender is either aligned to a two surface or three surface formation. Clearly this depends on the where the 3-technique is set. Those that are aligned to a two-surface, are called a “31” technique defenders. If they are aligned to a three surface picture, they are called “10” technique defenders. There will be circumstances where they will get cheated to a 91 technique based on handle formation overloads, which I explain in a later ideology. And in Bud Foster’s defense, he would set the front using the following protocols: 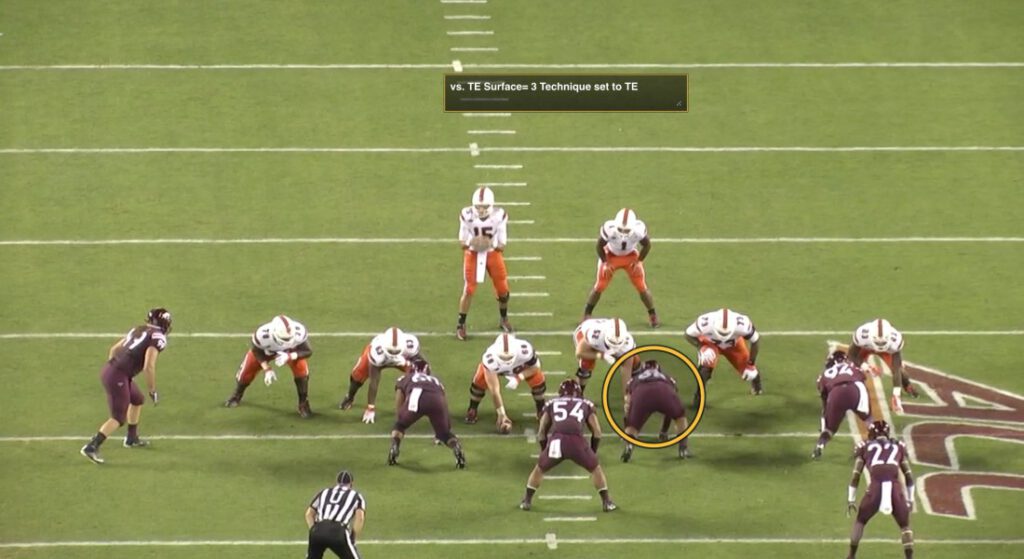 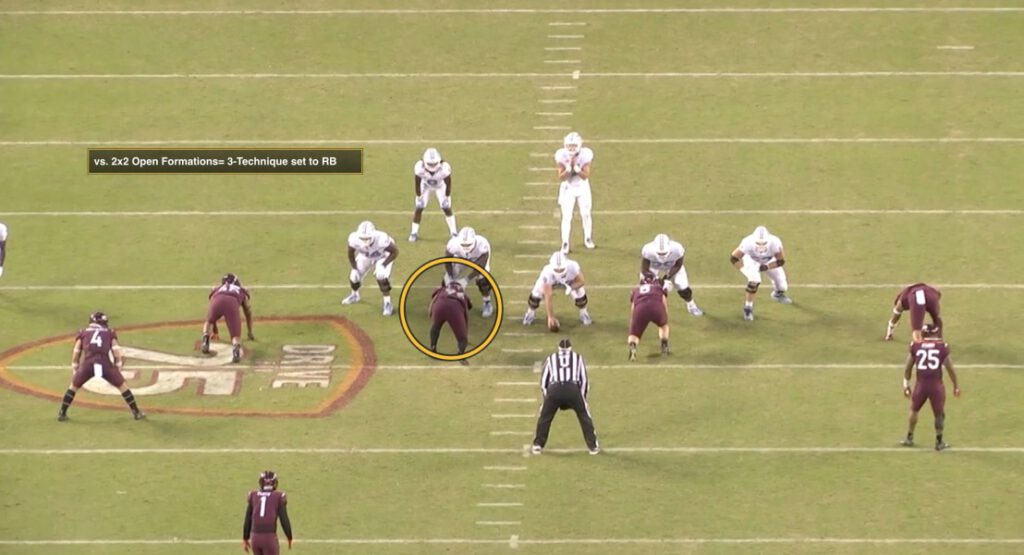 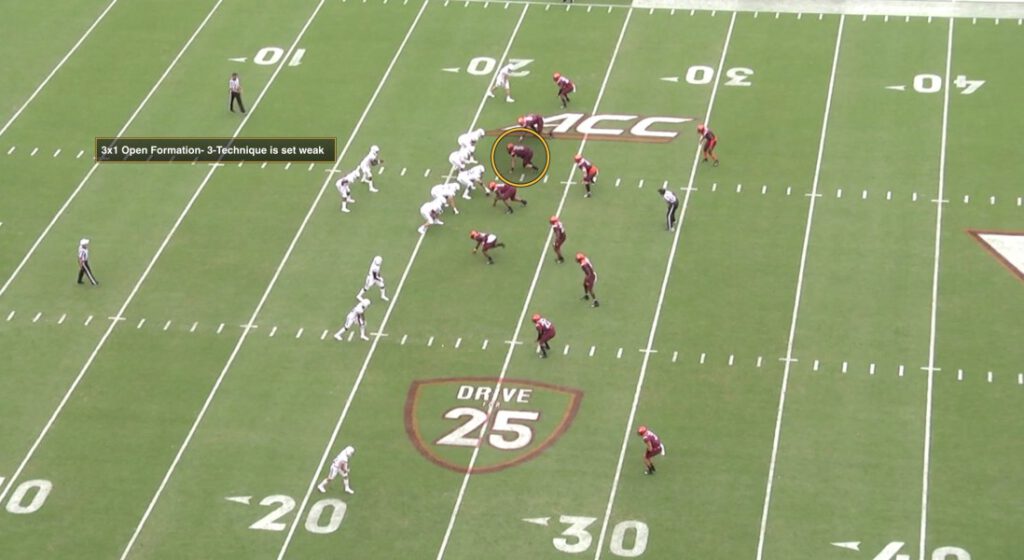 Then once the ball is snapped it becomes “flow to” vs. “flow away” reads and open and closed windows. In his system, he differentiates lines of sight between upper planes (what you see) and lower plans (what you feel). For example, in defending Y off run game, box linebackers are expected to see the Y with an upper plane, but feel the line with a lower plane. If players can’t use both those planes, they might be moved to become edge defenders as was the case when James Anderson came into the Hokie program. Originally tabbed as a Mike, when he was moved to play in space as an edge defender he became much more productive. 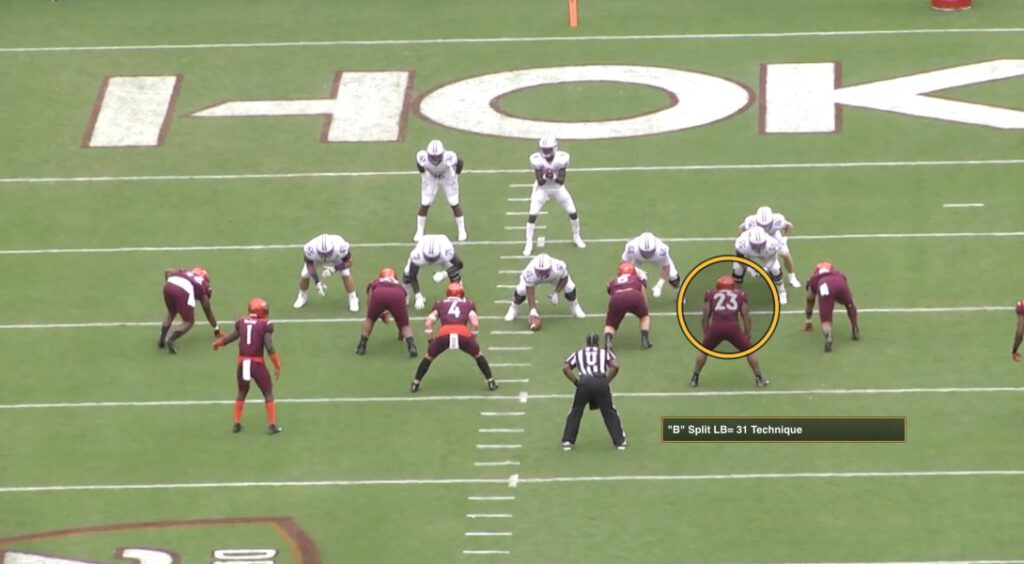 Alignment: This becomes similar to a 50 linebacker read. His split varied from a B gap split alignment (2i), to shoe to shoe on the Tackle or even stacking the Tackle depending on the back alignment and game plan. If offenses were not outside run threat teams, this player may be cheated towards the B split. If they did have a potent outside run game they may get cheated to go stacking the Tackle. This can also be dependent on the level of the back. Deeper backs signified interior runs (thus a tighter split) while wider backs signified exterior runs (thus a wider split).

Flow To: With flow to, the linebacker is always given the opportunity to gap swap with the defensive end to his side of the window is closed. For any open windows, he’s free to close it, with a responsibility of being a B to C gap player. Many times, he is also given the freedom to close out gaps pre-snap by making a Black call (DE takes B gap) so he can play the C gap. It’s something that Bud used frequently as a “get out of jail free” card to alleviate any second level player of an interior run gap. And it’s a concept referenced continually in this study.

Flow Away: He is free runner in zone coverages and the cutback defender in man coverages. “We would read tailback to line key,” said Bud. “He must feel pullers, but that is their initial read. The play side blocking threat is the Tackle. If there was a threat of bubbles, we gave him the option to close that gap out.” 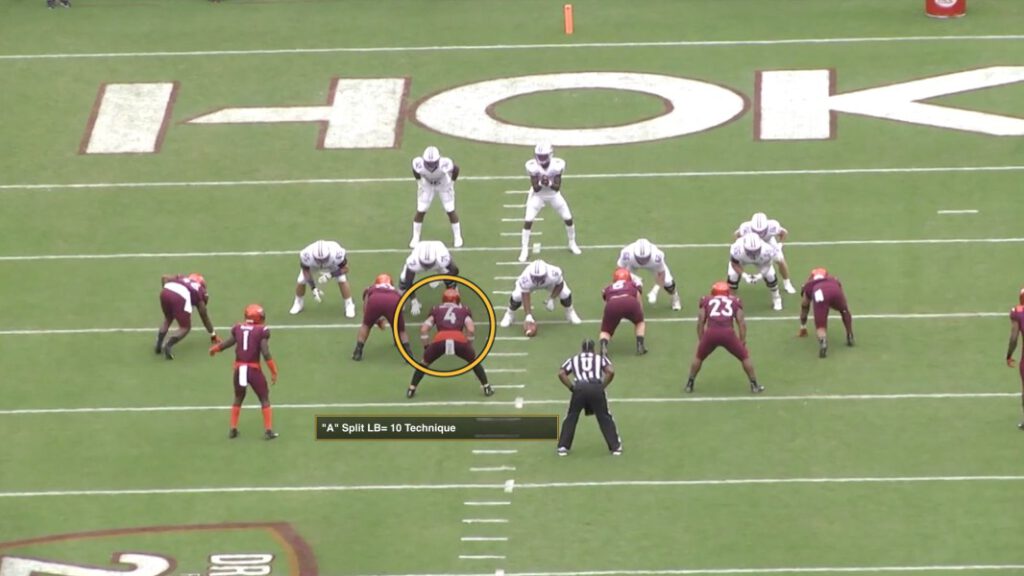 Alignment: Split the Guard and Center

Read: Here, Bud felt that the Center is the truest read and this player will read the Center to triangle (both Guards). His rule is the A gap to the ball. 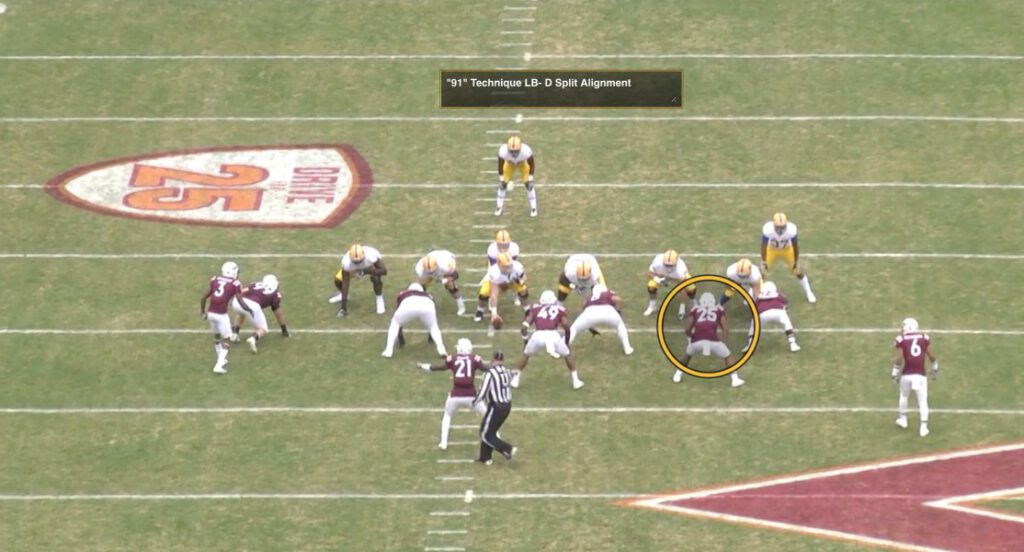 Alignment: His alignment is to a 3-man surface. “91” meant he was a D to A gap player reading the tailback to offensive line. “He has to identify who may be the play side blocking threat,” said Bud. “It can be a tight end or the tackle. He will often have the alley as the force defender.”

Flow Away- A gap player. 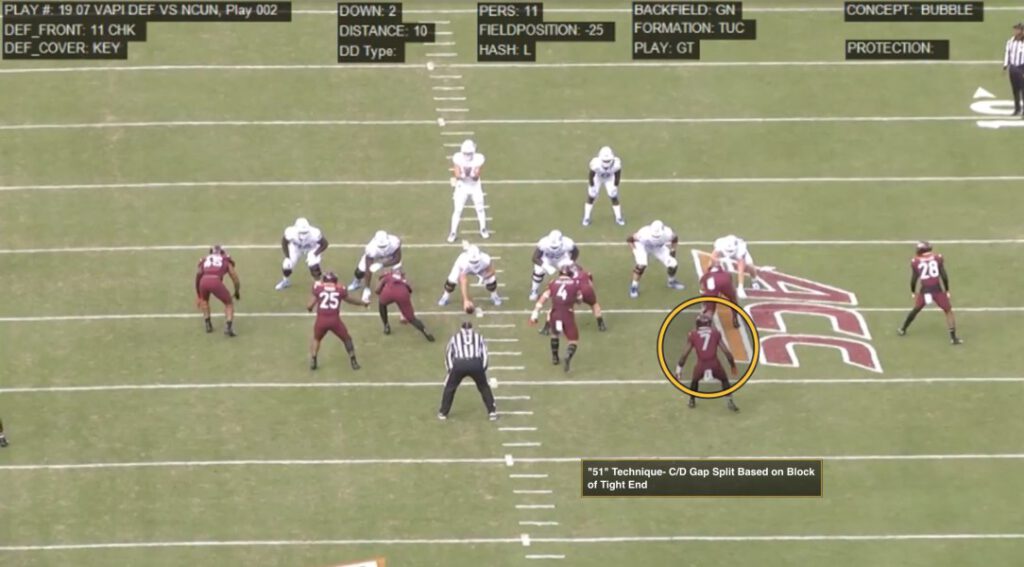 Alignment: This could be something the Corner needs to be in if it against a Nub set. He will have C or D gap based on block of tight end. If the tight end fans, he enters the C gap. If the tight End blocks down, he would scrape outside. Of course, there would be instances when Bud would swap the Rover and Corner to get quicker run support against three-man surfaces.

This universal teaching of alignment and flow correlates with universal base block destruction rules taught to each position. Each defender is taught how to attack and disrupt blocks as it pertains to four distinct scenarios:

This teaching is detailed from his playbook below: 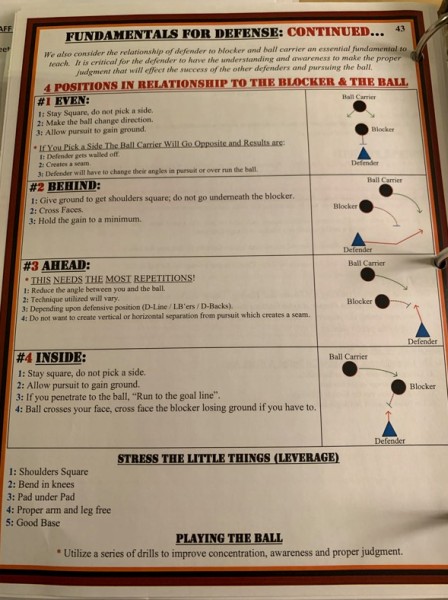 The Impediment: The Advent of the Dual Threat QB and QB Designated Runs

Back in the mid 1990’s when Bud Foster took control of the defensive reigns in Blacksburg, there was one program majoring in option concepts: Syracuse. And while they ran their lethal midline option flawlessly, it was one of the few times that he had to defend a legitimate dual threat quarterback. By the time he retired in 2019, every opponent on the schedule had a signal caller that could be a run threat, some more so than others. Which means he couldn’t just sit in a base six man box and expect to match hats. He had to get creative, particularly in the way he was teaching run fits. This came with using a similar progression he taught linebackers and carrying that over to teach safeties who were often asked to be the additional run fitters to combat this offense.