Editor’s Note:  Coach Ginn served as the LBs and Defensive Front Coordinator for the Yellow jackets this past year after spending 2 years as the Offensive Coordinator and Receivers Coach at Choctaw High School.  Prior to serving his role as Offensive Coordinator, Coach Ginn spent 3 seasons Coaching Receivers at Choctaw.  Before coming to Choctaw, Ginn spent four seasons (2004-2008) as Defensive Coordinator at Tecumseh High School (Tecumseh, OK.)  Joe worked as a Defensive Graduate Assistant for Choctaw High School (Choctaw, OK) in 2003 working with Linebackers.  Joe played 1 year of College Football at Bethany College in Lindsborg, KS; and 3 years of Football at East Central University in Ada, OK. 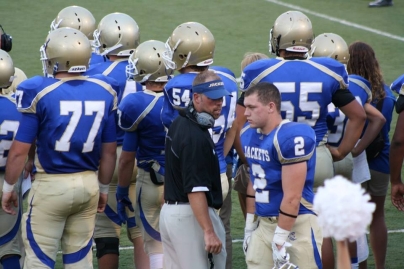 In my opinion the key to great defense is proper fits and gap responsibility by a whole defense.  With that said, I also believe great fits by Linebackers and even safeties can cover up for the Down Linemen who may at times get out of gap integrity.  I’m constantly talking to my players about how they have to be the “proper piece of the puzzle.”  It seems the players understand puzzles and by making the analogy to it all fitting together like a puzzle helps them understand the team cohesion and fit cohesion we have to have to be a premier defense.

We feature a multiple front 4-3 scheme which at times will look like a 4-2-5 and sometimes a 5-2.  For the sake of this article I’m going to focus on our Base look which we like to play the majority of the time for the answers and cohesion it gives us.  Our Base front will have a 7 technique or Inside Eye alignment on the TE from our Defensive End, when we get a TE, without a TE this DE slides down into a 5 Technique.  Our Strong Side Defensive Tackles is in a 3 Technique who we tell to put his inside foot on the crotch of the Guard.  We play a 2i technique with our Weakside Tackle.  We tell him to put his outside leg on the crotch of the Guard.  Lastly, we play a 5 Technique DE weak.  He is coached to have his inside foot on the outside toe of the Tackle or put his inside foot on the Crotch of the Guard depending on the type of player he is.

As far as our LB alignment, I want these guys lined in our gaps.  I have our Sam LB put his Inside foot on the Outside foot of the TE, or he will apex without a TE based off #2, I tell him without a TE he is splitting the End Man and Number 2 and adjust him from there based on coverage. (that’s a completely different talk)  Our Mike LB is told to put his inside leg on the Football.  He is an A gap responsible player and I want him to line up in his gap as best as possible.  Our Will LB’s alignment is where we vary from a lot of 4-3 Defenses.  We feel like the Will has the ability to “Erase” the weak side, he also at times is asked to be the force player and we feel like putting him down inside the box puts him in a bad position for us to ask him to do this.  Therefore, his alignment is essentially stacked on our Weakside DE, I tell the Will vs. a pro set to put his inside foot on the Outside foot of the Tackle.  Willie will also have to apex vs. a split #2 receiver his side.  We also slide him back into the box vs. a trips set away, as well, again, I feel like those are different clinic talks.

Our LB depth is always at 4& ½ yards.  I believe this gets them where they need to be to be able to read and react to be in proper position after the ball is snapped.  Alignment is the #1 thing we preach from day one with our defense, we feel like Alignment is CRITICAL to a defense.  I have diagrammed out our base alignment vs. a Pro, Doubles, and Trips set in Diagrams 1-3 to give you an idea of where we want to start from alignment wise. 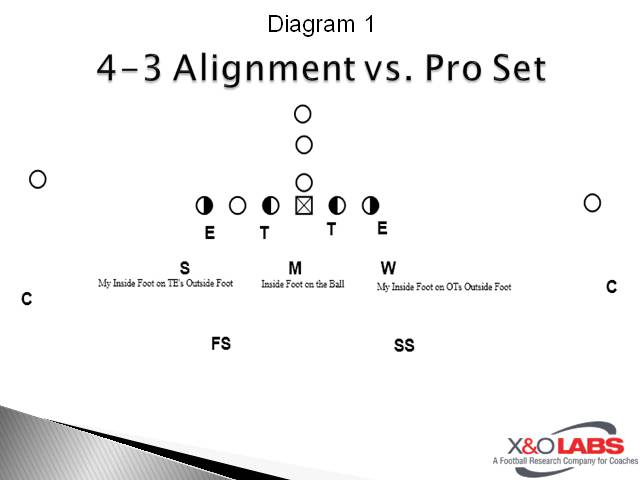 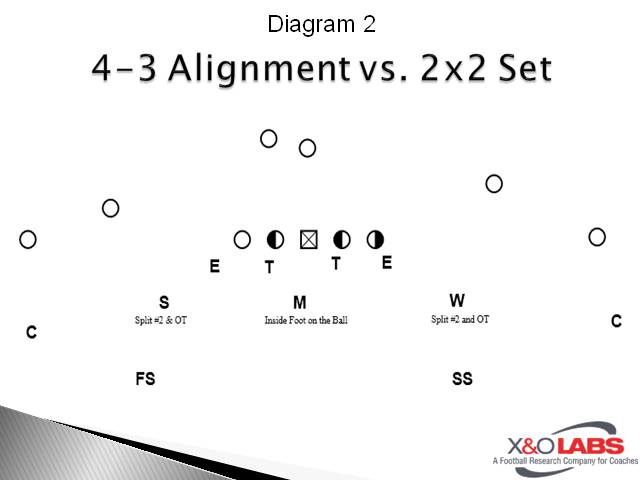 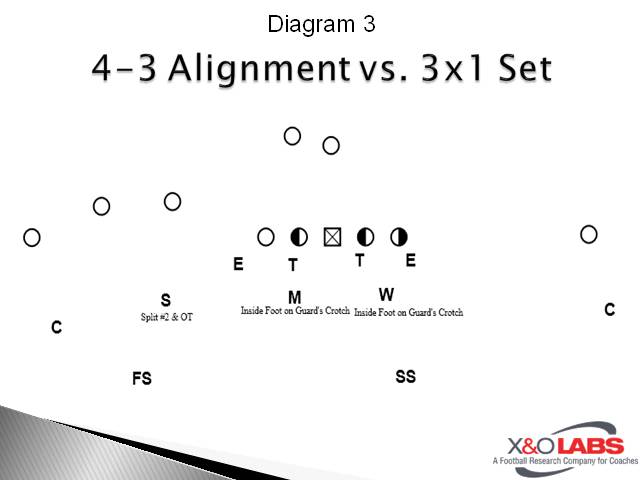 When I am learning about a scheme, I always want to know what the coach is looking for in his linebackers to make the scheme work.  For us, our Mike Linebacker has to be a kid who can get off blocks.  If he can’t get off blocks, we have to cover the Center with a Shade Nose and that makes us far more susceptible.  Mike must be a kid who can Read without errors.  I get on to my Mike harder than I do the other 2 because with him a split second can be a touchdown if our safeties don’t bail us out.  Like I said he has to be able to get off blocks, he can’t stay blocked and definitely can’t go around them.  This is a position you can sacrifice a little speed for size & strength so long as he can read.  Our Willie can be a smaller faster guy.  I feel like we can take a slower Safety in there at Willie if he can read and will be aggressive when we need him to be.  This guy last year was my weakest LB, in terms of strength, but he made good reads, and got where I needed him to.  The Sam again, needs to be a Strong Safety type kid.  This guy needs to be stronger as he’s going to have to take on blocks of the TE.  Again, if you have a LB that can run a bit, but can’t read, put him at Sam.  Sam must be Physical and not afraid to hit.  Really I don’t want any of these guys afraid to hit.

I feel like our LB keys are unique and give our kids an advantage on their reaction reads and how they get a jump start on where they’re going, you’ll see on some of the clips how our Mike LB’s keys put him to the spot the ball is going before the Linemen even could reach his pull on a few of the Counter plays.  So, I want to address a little on how we get to where we’re going before I talk about where we’re actually going. I begin every individual practice with a key read drill as I believe in the importance of proper reads in LB Play.  I still teach a 6 inch read step as an initial reaction to our read.  I tell the kids, “be slow to see it and quick to react once you’ve seen it.”  I also would like to take the time here to tell all of you if you are not filming your inside period each day from behind the defense and reviewing it with your players you are doing them an injustice in my opinion.  I feel like this is one of the things we do to put our kids at an advantage, because you can tell them 1000 times, but most of the time it just takes them seeing it one time before they understand what you’re saying.