Drilling the Guard to Near Back Read Progression for ILBs

There are three main points of emphasis that are communicated to our inside linebackers at the beginning of the year. They include:

While block destruction, tackling, footwork, and pass defense are all important aspects of playing ILB, our players really take pride in reading their keys and then reacting to the football. If we get good at reading our keys, we can always make up for a lack of talent or speed. Stopping the run is our first team defensive goal, so we really emphasize the importance of being disciplined with our eyes and reading keys. For us, we believe the easiest and most efficient way to read effectively is by reading “guard to near back.” Out of our three or four individual periods each day at practice, our ILBs will spend at least one period or more each day practicing our reads, whether it’s in the form of a drill or a walk through.

From an overall defensive perspective, we are a multi-front, 3-4 defense. We will start off in an under front with a stand up 5 technique in the boundary and then branch off from there. Most of the time, our two inside linebackers will align in 30 techniques (outside shade of the OG). We believe in being gap sound in the run game, but understand that gaps can move based upon whether an offense is running gap scheme or zone. Although we are a base under front defense, these reads, rules, and terminology can be applied to all ILBs in any defense in some form or another.

This article will focus on the progression of how to teach inside linebackers to read “guard to near back” effectively. When teaching players how to read their keys, it is important that we work part-to-whole, utilizing specific and simple terminology that all players can reiterate without hesitation. Our linebackers will hear the terminology being used constantly throughout drill work, film study, and chalk talk. The part-to-whole teaching and drill work progression includes the following:

Guard to Near Back Key Principles

As opposed to reading primarily guard or primarily the running back, we read guard first to the near back second. Once we get our initial read from the guard, we eye our near back to read his shoulders to determine whether he’s running inside, off tackle, or outside. Their eyes should always be on the guard first because of the potential misdirection of the RB on run plays such as counter and QB counter. This is one reason why we do not just read the RB. It is worth noting that before we teach the primary reads, we review our read step and basic footwork. When the ball is snapped, we teach our ILBs to take a read step mirroring their primary key (guard) taking short six-inch steps until our key tells us to react and attack. When reading guard to near back, we initially focus on three primary reads to start off. They include:

An open window read can be identified as a clear open read in our gap with full RB flow towards the gap. When we read this we will “plug” the gap, either making the play or taking on a fullback’s, H-back’s, or pulling guard’s block. 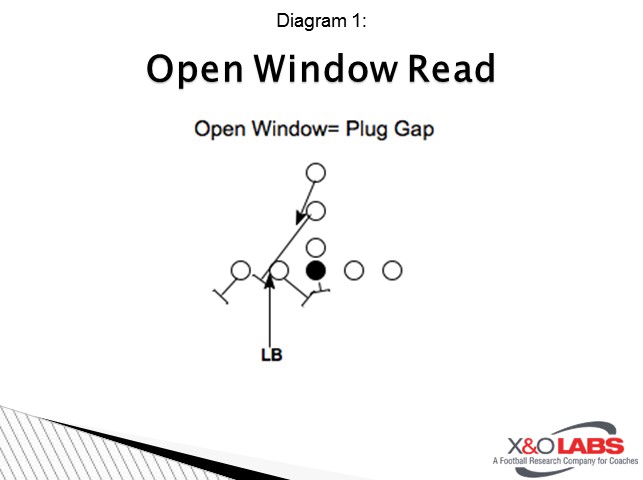 A closed window read can be defined as down blocks by the OG and OT. When we read this, our ILB may take his six-inch read steps mirroring the down blocks, but should redirect and scrape “cloudy to clear” tight to the wrong arm. The running backs shoulders will most likely be square to us still. Whether or not we are getting a “pull” call from the opposite ILB will help with this read as well.This read will occur when teams run gap scheme based plays. 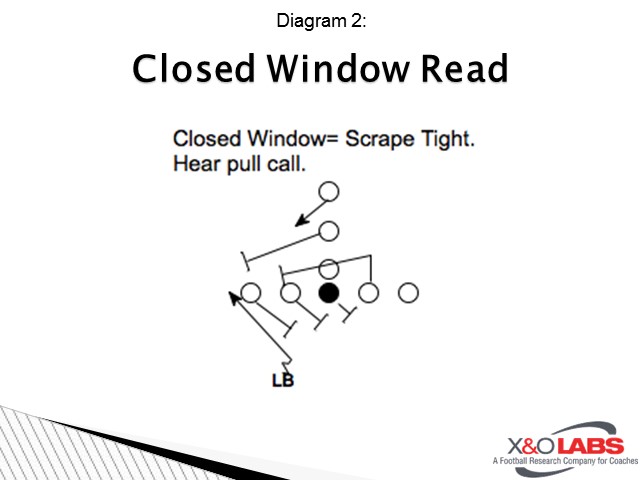 A pull read can be defined when the OG or OT pulls behind the center. When we get this read, we teach our guys to communicate “pull-pull” and then to “press play side A,” working “cloudy to clear.” We teach our guys that when pressing the play side A, if it’s “clear” we “press” it, if it’s “cloudy,” we work over top the down block from the play side. Since we read guard to near back, it is important to note that a pull by the OG trumps any directional flow of the RB (counter plays). The pull call tells the opposite ILB, who is getting a closed window read, to redirect to scrape. In the “Half-line Read Drill” clips below, you will see a rep where the ILB follows his guard as opposed to the misdirection of the near back.