Training the 9-Technique vs. Pass

Researchers' Note: You can access the raw data of this report - in the form of graphs - by clicking here to read: 9-Technique Statistical Analysis Report.

As a follow up to last week’s report on training your 9-techinque to play the run game (click here to read the report), this week’s research will center on how that 9-technique player could play the pass game.  Again, it’s important to clarify that a 9-technique is any player on the outside tip of the tight end, or third player in a three man surface.  For the purpose of this report, we’ll focus on the outside linebacker type in an even (Diagram 1) or odd (Diagram 2) front. 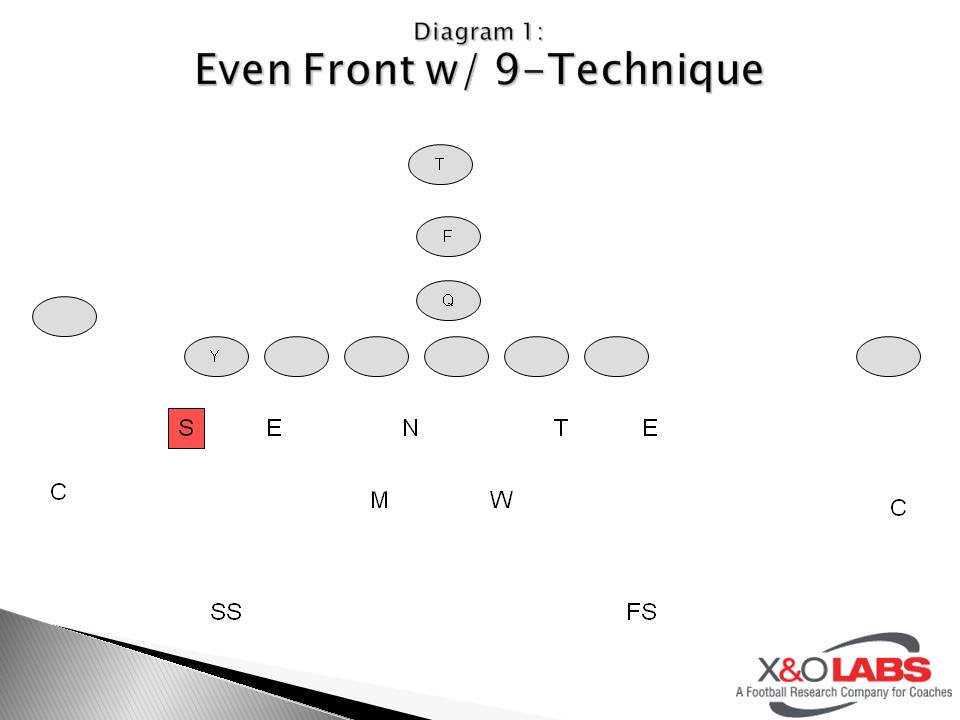 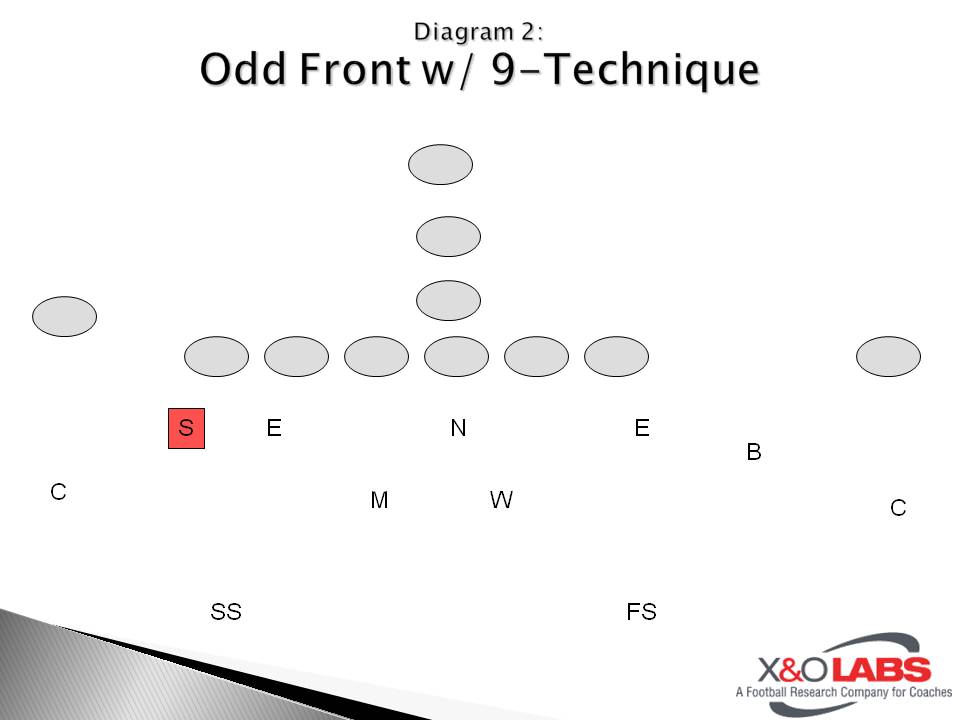 As we detailed in the last report, playing the 9-techinque position is so vital defensively because you must have the speed to rush the passer while having the strength to handle the D gap in the run game.  Combine this with the athleticism required to play zone coverage with the needed speed to play man coverage and you see how important it is to have a player with all these skills.  We wanted to know which kind of player coaches look for when evaluating the 9-techinque defender, so we asked.  We came up with the following results below.  In no particular order:

Qualities of a 9-Technique Defender (Based on Coaches’ Responses)

When we started our research, we were under the assumption that the 9-technique defender (if not a defensive lineman) was mainly a pass defender and not a rusher, particularly in odd front defenses.  So, we weren’t that surprised when we got the results of our tally below. 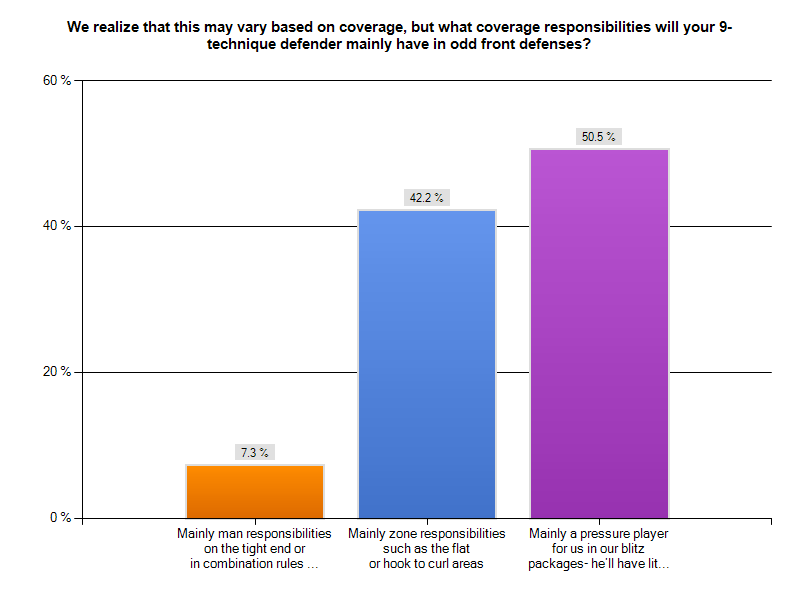 The results between pass defenders and rush defenders in the odd front were pretty much even, mainly because those defenders are usually linebackers in nature.  But when we polled our coaches that run the even defense we’ve found those 9-techique defenders in the Under defense are pass-rushers first, and coverage players second. 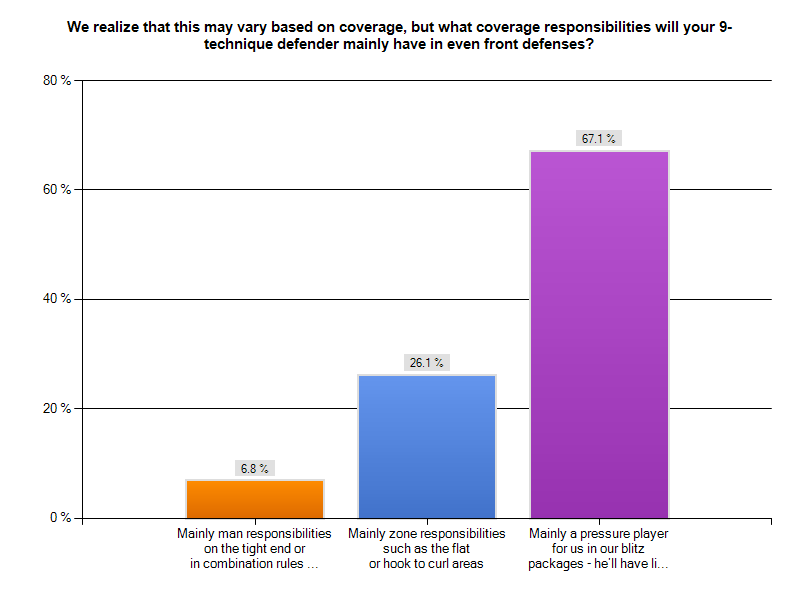 So, because our results were split between being pass defenders and pass rushers, in order to accommodate the needs of both defensive structures, we’ll explain both scenarios of the 9-technique being a coverage player as well as a rusher below.  Since the majority of 9-techniques are pass rushers, we’ll start there.

Case 1: Using the 9-Technique as a Rush/Contain Player

Through our research, we’ve found that the 9-technique outside linebacker is rarely a pass rusher unless in pressure situations.  In most of these situations, coaches will play some form or three deep pressure behind it by dropping a safety (Diagram 3). 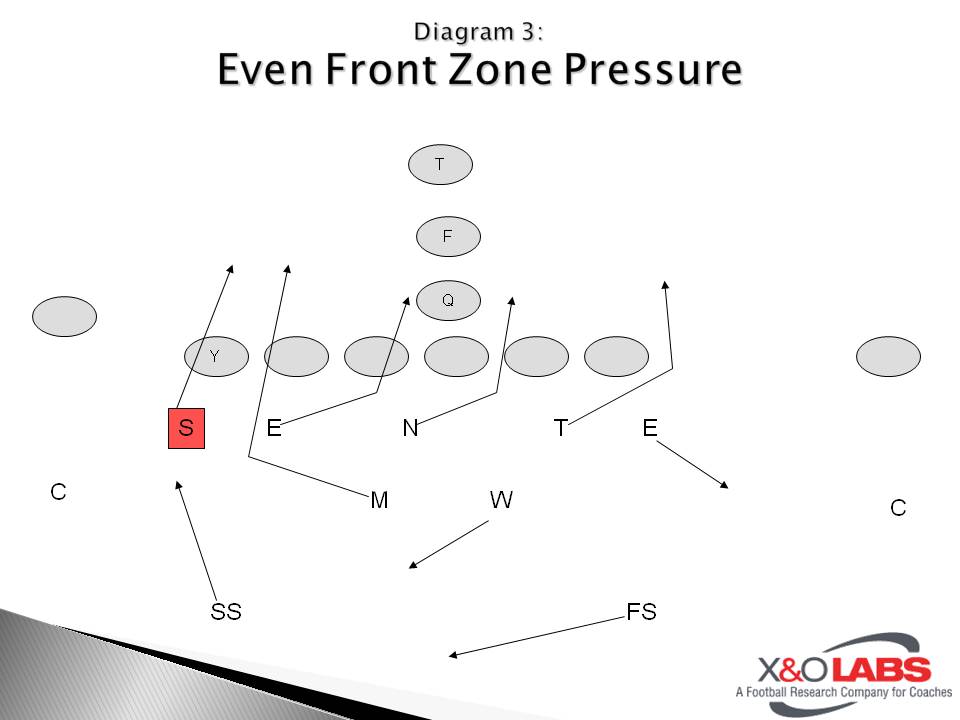