At Shiloh Christian, we base out of a 4-2-5 but are multiple in our fronts and coverages. As a result, we want to teach techniques with as much schematic carry over as possible for the sake of simplicity. One of these is our "slice" technique that has to carry over to all coverages. It is not a technique we invented but because of our multiplicity and belief in pattern matching it has been an effective tool in our toolbox when installing and game planning coverages.  Once a player understands the meaning of “slice” it allows us to coach fast and efficiently.

The term “slice” is a universal term we teach meaning Stay Low and Inside. It is used in any scenario where a player is a curl-flat dropper, hook-curl dropper, or even a cover 2 corner could use the technique with OUTSIDE leverage on a 1 receiver. We will teach this technique to all LB’s, safeties, and corners. It’s an easy concept to teach and has great carry over to all coverages with zone match and man match concepts. As a result, it can be drilled by any DB/LB coach as part of a circuit or other group work involving multiple positions.

Once we have mastered the technique, we have now taught a fundamental technique we use in cover 4, cover 3, 5-man pressure zone coverage, cover 2, and man match coverage for underneath defenders.

Coaching points include positioning yourself with aligned leverage between your 1st threat and the next closest receiver. Our positioning should be “low” as to not allow the receiver to beat us underneath. We want to “body or wall” our threat and “see” the next.

We will begin the teaching progression in phase with a receiver. This position is half a man with his head behind the receiver. We want hands-on so we can feel/wall/collision while seeing the next threat. The idea is to carry the receiver with my leverage until I have a new threat.

A coach will stand opposite the defender- as the receiver works vertically, the eyes of the defender should be on the coach, keeping proper position with his body. The coach can flash hand 's to train eyes and work feeling and seeing simultaneously. 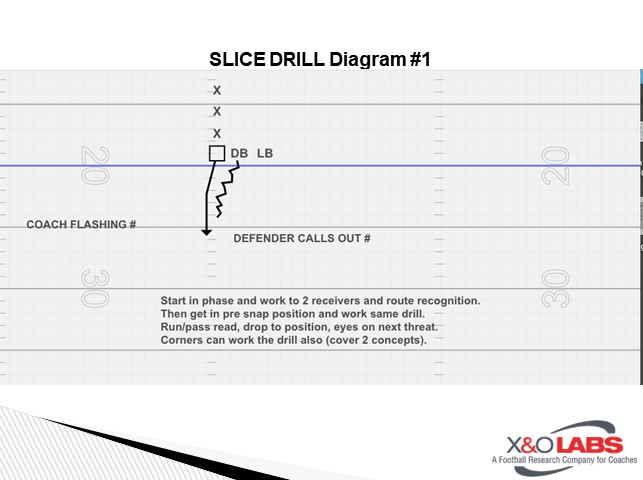 From here, we progress to actual routes while still in phase. The defender resumes position, but now he will get actual routes (signaled by a coach) and react accordingly. If he is a safety/LB he is working curl-flat drops, hook-curl drops, etc. A corner would be working Cover 2 slice with outside leverage, funneling 1 and seeing 2 inside.

Our next progression is to work from pre-snap alignment. Working from the snap, read, get in position and react to routes. If this technique is a run-first player (for me it usually is), coach it that way. Play run first, react to pass and work to get in phase on the 1st threat while seeing the next threat.

Below are diagrams of underneath defenders based out of 1/4’s concepts aligned to 2 by 2 formations. The STAR and WLB are using slice technique in this scenario. 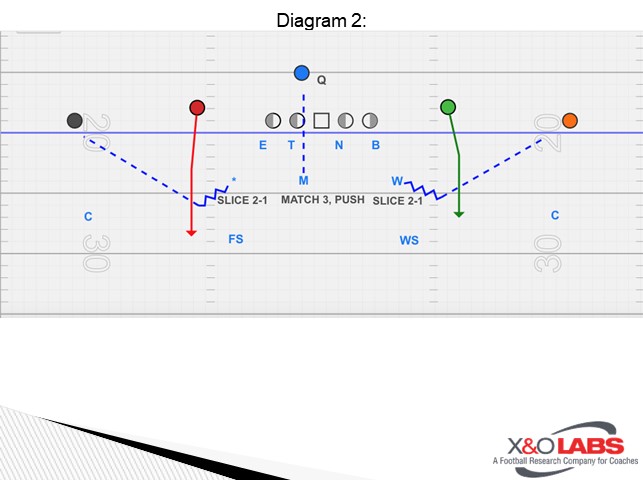 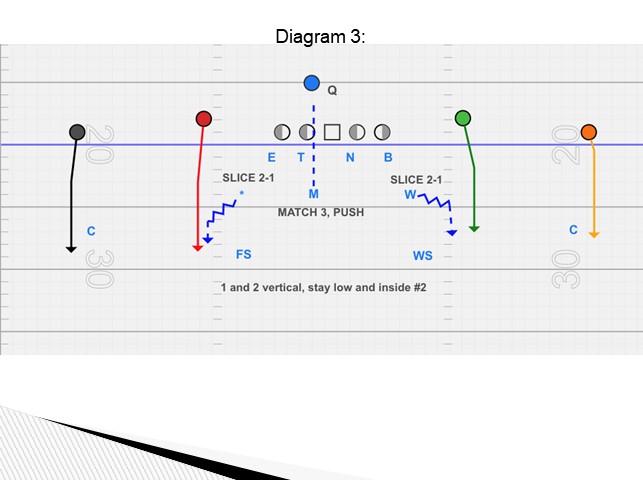 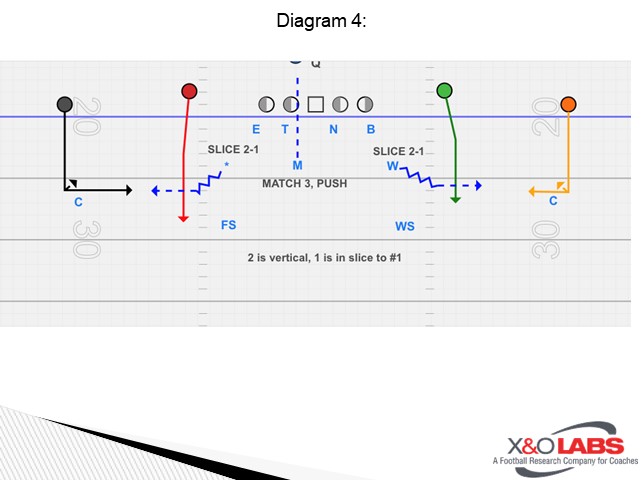