Due to the control that the offense has before the ball is snapped, the game of football is offensively driven. With the ability to determine the personnel, formation, shifts, motions and snap count they dictate the terms to the defense on every play. Due to this pre-snap control, defenses must be able to adjust to what the offense presents. In a Two-High safety scheme, it becomes the responsibility of the linebackers to be the adjusters. In the modern spread game, this means linebackers spend more time aligned in space as APEX players. Additionally, with the introduction of the run-pass-option (RPO), APEX players in a Two-High safety scheme are being put in conflicts on what to defend. The combination of these things has made the APEX player a difficult position to play and coach. This report aims to address how to get the most out of the APEX player with proper alignment, reads, and pre-snap indicators. 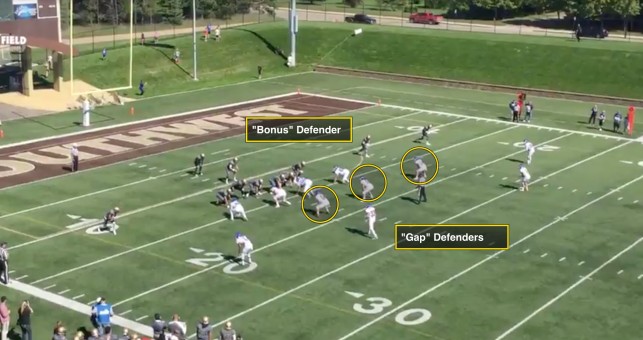 If a linebacker is aligned in the box he is referred to as a “gap defender”. As a gap defender, they can be aggressive against the run because they have no responsibility to the throw option of the RPO. We teach our gap defenders to play RPO’s as base run plays. Even though this report is about APEX defenders, it is important to understand what the linebackers in the box do to see the whole picture.

If the linebacker is aligned in the APEX position he is either a “bonus defender” or a “conflict defender”. A bonus defender is an APEX player who doesn’t have a primary gap attached to the box, and can play the throw option in the RPO first. We teach our bonus defenders to guarantee the throw won’t happen before helping on the run.  The throw could be a screen or three step routes. After guaranteeing the throw, the bonus defender plays the run option from outside in. The beauty of the bonus defender is the ability to create help where it is most needed. For instance when facing a talented runner at QB, they can be used as a secondary QB player and take stress off the defensive end.

When it comes to the stance of the APEX player, we teach the same stance as a linebacker in the box with one small exception. Instead of the APEX player having their toes at the same level, we have them stagger their stance with the inside foot forward. The stagger should be no more than the outside foot’s toe on the inside foot’s heel. We feel this allows our APEX player to open their hips quicker in passing situations and still be able to play downhill against the run. With that being said, stance is all about comfort and efficient mobility. If a player is more comfortable in a squared up stance, we encourage him to use the one he feels the most confident in.