As I like to jokingly say, “It is an offensive world, defenses are just living in it”. In order to exist in the current offensive world, defenses have to adapt what they were doing both structurally and personnel wise. As a player back in the mid 2000’s, I played in a tradition 3-4 style defense where the positional players were cookie cutters of one another and only the Outside Linebackers created reduction fronts. Both Outside Linebackers were the same body types and had the same skill sets. Both Inside Linebackers were the same body types and had the same skill set. In the mid 2000’s, the game wasn’t played in the open field like it is today and defenses were able to get away with this type of personnel and still have success. However, the game today is played in space, with up tempo, and pass options on every run play. Your defensive structure and personnel must be designed to handle today’s offensive schemes.

Here at Dickinson State University we adapted our defensive structure to a 3-4 / 4-2-5 hybrid defense to combat the modern-day offense. We went to this hybrid structure four years ago and have seen solid results since. As a defense over the past four season, 44 games, we have averaged giving up 16.6 points per game, which is the best in our conference spanning that time. We average 307 total yards a game, 115 rushing yards and 192 passing yards. We also have averaged 29 takeaways per season, along with a 3rd down defense yielding 31.2% success; leading our conference in both categories. 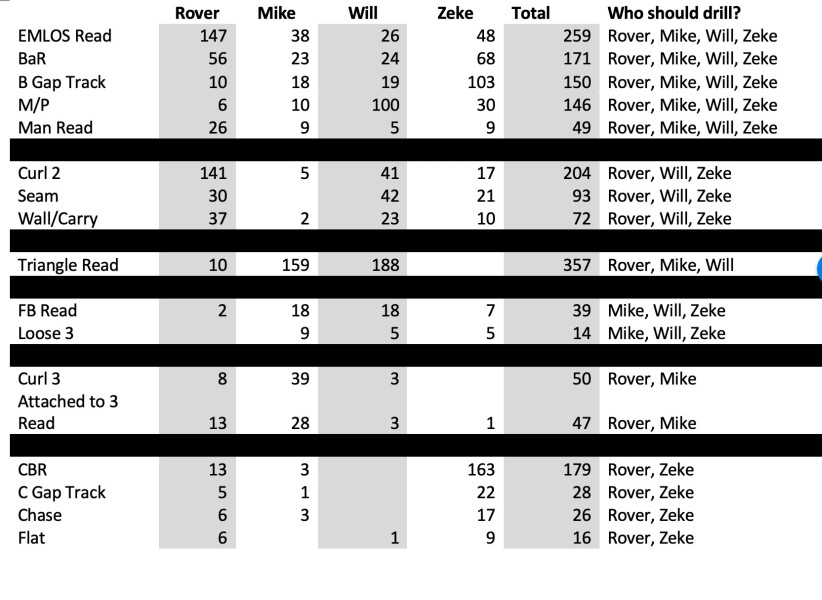 We refer to ourselves as a hybrid for two main reasons. First, our linebackers are no longer cookie cutters of one another, they are multi-positional players. Our field OLB, Rover, is more of a strong safety type player that gives use great flexibility in our coverage variations. Most of the players on our team who play this position currently, were safeties in high school. Our boundary OLB, Zeke, is more of a rush end who spends his time equally playing on the line of scrimmage and off the ball. This player becomes a fourth rusher for us more than any other linebacker. Our field ILB, Mike, has to be able to play in space and in the box. He is usually one of the best athletes on the team who is still very physical. Finally, our boundary ILB, Will, is the old school tackle to tackle linebacker who primarily lives in the box and is usually our biggest linebacker. The second reason we call ourselves a hybrid defense is because when creating our different fronts, we have the ability to construct them with any of our linebackers, not just an OLB like a traditional 3-4.  Even though we base out of 3-4 personnel we spend equally as much time in even spaced front structures as we do in odd spacing. This flexibility allows us to best match up with the offenses personnel on the field and put our players in position to utilize their greatest skills.

Having multi-positional linebackers and cross training them all together has opened up our playbook from both a front and coverage stand point. It allows us to be very multiple and complex to an offense, while being simple for our players. It allows our players to do what they do best instead of being asked to perform skills they struggle with. This article will focus on why we cross train all four linebackers, how we determine which skills need to be cross trained, some of the biggest challenges in cross training and detail how we create our fronts using the different linebackers.

First, let me explain why we cross train. What we noticed through self-scout was that throughout the season at some point all of our linebacker positions had played outside the box, inside the box, on the line of scrimmage, rushed the passer, and dropped into coverage. This could have been because of defensive design or the way the offense aligned to attack us. Due to the way we personnel each position, some do each skill more than others, but none the less each position ends up performing all of the skills. Yet we were not training all of the linebackers at a high enough level to be successful at all of the techniques. Which revealed a weakness in our scheme. If an opposing offense is able to make a player who is not comfortable playing in the box, be in the box, they are dictating terms. This is where the idea of cross training started. We wanted to make all of our players comfortable in every situation, whether it is something they do often or only every now and again.

Cross training means that all linebacker positions will learn the same skills and techniques. Everyone will learn how to play on the line of scrimmage as stand up linebacker and know our different rush techniques. Everyone will know how to read the triangle when aligned off the ball in the box and how to read the end man on the line of scrimmage when aligned outside the box. All of the positions will be able to execute all underneath coverage drops as well. Everyone will learn how to beat a block in space and at the point of attack.  This allows for more scheme versatility, maximizes our ability to use sub packages, prepares all of the linebackers to align anywhere within our defense, and makes it easier for one person to coach all four positions.

As a small college program, we are limited with the amount of coaches we have at our disposal. Cross training allows one coach to work with the whole group more often and limits the amount of player lead drill work when the group has to be split up. Cross training also yields to smoother position transitions with in our roster. As a player grows and develops he may be better suited to play a different position. By cross training the entire group, a move from Rover to Mike doesn’t feel like starting at square one for the player. This allows us to make roster changes with confidence and keep our best players on the field.