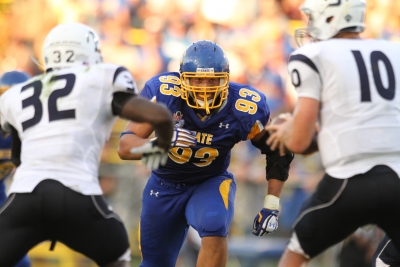 At the defensive tackle position, the top priority is always having guys that are physical at the point of attack vs. the run. The commonly used phrase, “You have to earn the right to rush the QB,” will always hold true because most teams will continue to run the ball until you prove you can stop it.

With that being said, disruptive pass rushers on the inside can change a game and force offensive coordinators to adjust their pass protection schemes.

At South Dakota State University, we have been very fortunate to have some gifted pass rushers on the interior of our defensive line. We have had a different defensive tackle finish the season with at least six sacks in the last three consecutive seasons. The most successful of those pass rushers led all 2013 Missouri Valley Football Conference linemen with nine sacks.

When teaching pass rush, there are four fundamentals that we focus on. These fundamentals are not specific to the defensive tackle position, but they are an essential starting point.

Once we have established the ground-work of fundamentals, we work on trying to find what is going to be the most successful go-to move for each guy. I encourage guys to find one move that they feel comfortable with and focus on refining that move every day. We will introduce and drill a variety of moves so guys have options, but I guard against trying to be a ‘jack-of-all trades’ when it comes to pass rush.