“Fixed” vs. “Read” Stunts to Attack Protections From 4-Down Spacing

Defenses with a 4 down structure have a variety of options in attacking protections with various line games and pressures. Living and dying by 5- or 6-man pressures to create pressure on the QB can be a dangerous game to play. The stunt world is one that can give additional opportunities to pressure the pocket while still playing your base coverages. The tough task for coaches is to find the stunts that can get you the most bang for your buck while still being able to fit the run properly.

Within our defense, we have two types of stunts: “Fixed” stunts and “Read” stunts. A “Fixed” stunt is going to be executed when called no matter if the offense calls a run or a pass play. These are high risk, high reward: when called in the right situation, they can create an explosive play for the defense. When called in the wrong situation, they can leave you vulnerable to a big play because of their volatile nature when talking about base run fits. A “Read” stunt is ONLY going to be executed if the offense gives a pass read. If the offense gives a run read, then we will play our base front rules. The benefit of investing in “Read” stunts is two-fold: First, they allow your staff to teach and prioritize fanatical eye discipline and get off out of your front four. Secondly, opposing offenses will never know if or when they have been called them unless they give a pass read, thereby hiding tendencies of base vs a movement rush.

In this report, we are going to focus on 3 of our basic “Read” stunts out of the 4 down the defensive front. 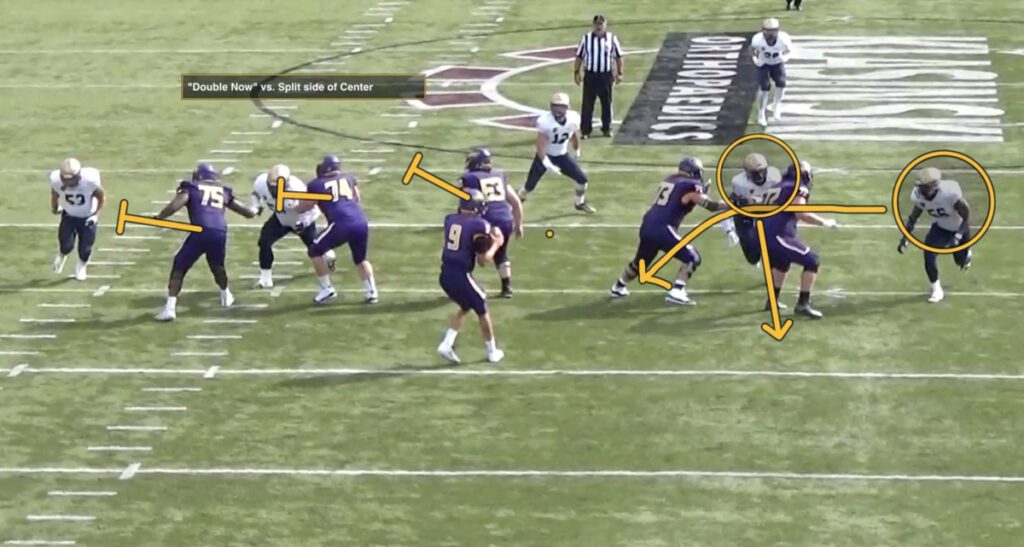 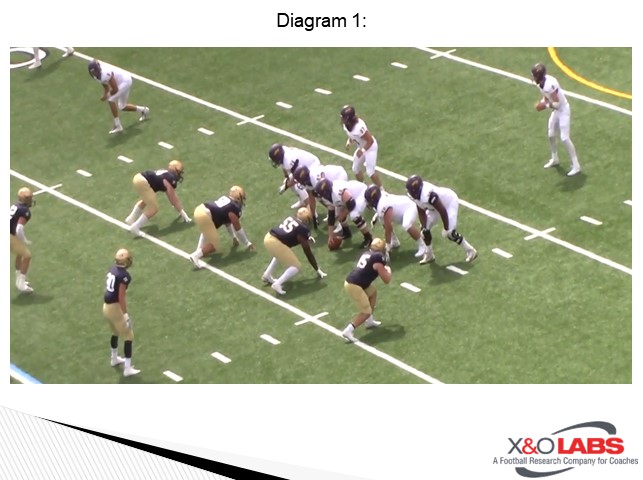 The basic over front vs a 5-man surface will have your defensive ends aligned in 5-techniques and some combination 3 technique/2i technique over the guards. With each defensive lineman in a shaded alignment, their visual key is the tip of the pad of the offensive lineman they are aligned on. From their initial stance, the biggest coaching point will be their eyes. The tip of the pad is going to give our run pass key within the snap of the football. If that pad gains ground = run read if it retreats = pass read. The first step of the defensive lineman must be vertical whether he gets a run or pass read.

The goal against a run read is to create vertical knockback on the offensive lineman you are aligned on.  The goal against a pass read is to beat the offensive lineman to the set line to execute your pass rush plan.  Proper eye discipline will allow the defensive lineman precise hand placement vs the run and proper rush leverage vs the pass. Without getting into all the specifics of basic defensive line play, this teaching point will be consistent as you progress into teaching the “Read” stunts.  Within these “Read” stunts, priority will be placed on their technique as the key to success vs the run or the pass. 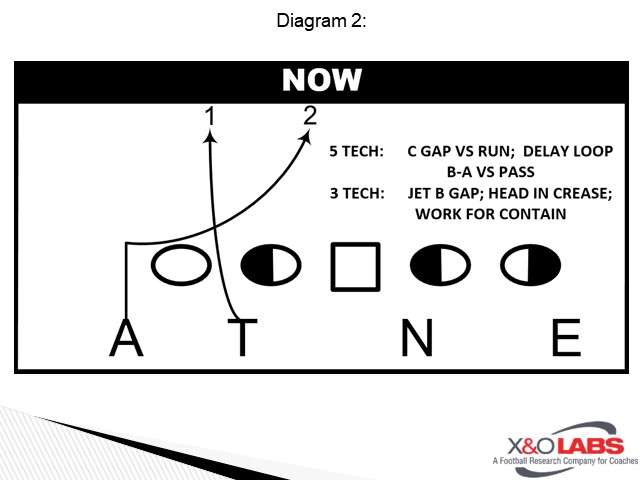 Purpose: The “Now” stunt is going to attack protections to the side of your 3 technique.

3-Technique (Penetrator) - When given a pass set, the 3 technique’s goal is to “jet” the B gap. Jetting the B gap is defined as getting the helmet “in the crease” of the guard (getting your helmet, behind his outside shoulder pad).  When he achieves this positioning, he will become the contain player through the B gap. If given a run read, the 3 technique will play his normal B gap by attacking the outside third of the guard straining for vertical knockback.

5-Technique (Looper) – When given a pass set, the 5-technique's goal is to delay the loop to the B/A gap depending on the slide of the protection.  He must sell his up-field rush to press the offensive tackle vertically.  Once the 3 technique has entered the crease, the 5-technique will loop tight off his butt and take the first open window (B or A gap based on the slide of the offensive line) to the quarterback.  If given a run read, the 5-technique will play his normal C gap by attacking the outside third of the tackle straining for vertical knockback.