It is safe to say that the evolution and utilization of the mobile QB have become a staple in many successful offenses, at all levels of football. As a defensive-minded coach, having to game plan to stop a mobile QB, who can make things happen and extend plays with his feet, to hurt you with his arm, is a challenge that more and more defenses face every Saturday. Here at Alfred University, we embrace the challenge of being a relentless pass-rushing team, accumulating 113 sacks in 4 seasons. A large part of our success is since we look at our D-Lineman as playmakers, not sacrificial lambs. We want our D-Lineman to make plays, whether it is stopping the run, setting up the blitz, or our four-man pass rush, we utilize The Cage. The Cage works to give each player in our scheme a job to execute beyond just owning their gap. We utilize our cage in four-man, five-man, and six-man rushes. We stress to our players that if everyone does their job correctly in The Cage, then everyone will eat. We look at everyone in the backfield as food for the defensive line and we are the wolves that must embrace the hunt. Each wolf has a specific and crucial role.

In our defense, we want our guys playing fast, not thinking, so we keep the concepts as simple as possible. What the cage presents is a vision beyond maintaining your gap. On day one, we present the cage to our men as being comprised of the four cage players, two high cage players, and two low cage players.  This gives each of our defensive linemen one of these responsibilities.  Pass Rushing is an art, but at the end of the day it comes down to three things: get off, having a plan, and the finish. Our read keys are simple, and we call them the “Three B’s”- Ball, Block, Backfield, and we read them with our eyes. When seeing movement we get off, exploding low off the ball. Then, our eyes go to the block, where we read the offensive lineman’s pass set and technique. Finally, once we defeat the block, our eyes move to the backfield. Now we are ready to dive into The Cage. 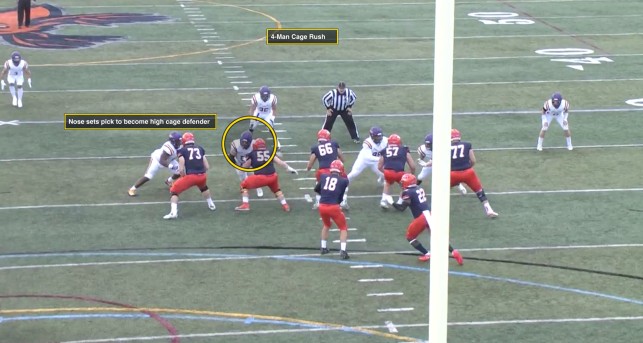 Our base four-man front is comprised of a 5-tech defensive end (our End) and 1 Tech Nose Tackle on the strong side, with a 3-tech defensive Tackle and a 5-tech defensive end (which we call our Rush) on the weak side based on our defensive call. Both the End and Rush are declared to be high cage players, with the low cage players being our interior Nose and Tackle. Each player must understand where they fit in the run scheme with their gap assignment first, then implement their cage responsibility. Everything starts up front, and our guys must take ownership of their jobs, playing for the man next to him, and the defense as a whole. That is when we have something special. Our cage players work in unison to condense, squeeze, and suffocate the backfield. Notice, we never use the phrase “contain the QB.” I cannot reiterate enough the shackles that it puts on a defensive lineman when you say contain. We never want to contain our players; we want to unleash them. Our words reflect our mentality and using terms such as condense, squeeze, and suffocate motivates our players and allows our guys to play relentlessly. Diagram 1 shows our four-man cage and the responsibility for each player. 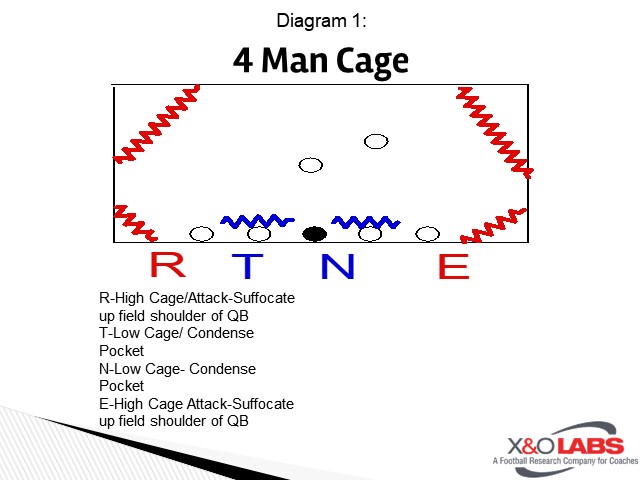 Our four-man cage gives us four chances to disrupt the QB. We preach to our guys that we need 25% from each of them, for each defensive lineman to execute his role and responsibility, and that is all it takes to end a football play. We begin with the job of our low cage players, the interior defensive linemen. These are our bigger bodies, capable of eating and beating double teams, and we owe a great deal of gratitude to these monsters up front. Their jobs are to “CONDENSE” the pocket, squeeze the passing lanes.

Our low cage is the first wave when it comes to defending the quick pass and RPO game that has taken football by storm in recent years. The low cage players know they must suffocate any step-up lane in their gap and with quick passes they need to fire their hands up to disrupt the vision of the QB. Even if the low cage player has no chance of getting a shot on the QB we can still do a great job of disrupting the timing of the QB’s mechanics with a relentless low cage rush, and by getting into and removing the quarterback’s throwing windows. Our low cage players know why they cannot leave their rush lane because that will compromise the cage, which goes down as a minus in the film room. Our players are keenly aware of this fact. An example of compromising the low cage is when that defender rushes outside of our high cage player to make his play or is displaced by the block of the offensive linemen. The two low cage players work to suffocate the QB in their portion of the cage by working off each other. This philosophy requires an unselfish mentality that reinforces playing for the guy next to you.  Our guys utilize a half-man technique on every single play, whether it is run or pass. We continually preach that half of a man is easier to defeat than a full man.

The second phase of our cage is the high cage players. Our two high cage players in the four-man cage are the End and Rush. The End and Rush target their key, which is the up-field shoulder of the QB. The Ends never let the QB outside of them, this is the constant battle many teams have against the mobile QB.  Again, our verbiage never uses the word contain- we want to Condense, Squeeze, and Suffocate. Based on opponent tendencies, our defense uses specific calls to signal to our defensive line that we anticipate a pass. This will trigger them to have their plan ready pre-snap. Pass rushers on our team will build their moves off of their skill set, we will never ask a player to do something that does not fit their skill, strength, or comfort level. We always emphasize having a plan, a secondary move, countermove, and finish. Every day we practice the fundamentals, working our hands and feet, always preaching the importance of a relentless pass rush. High cage players work together to condense the pocket and track the QB's upfield shoulder. Again, we revert to the Three B’s for the Ends as the key to getting to their aiming point. Ball, Block, Backfield, are our focal points throughout the entire play. Going back to another of our philosophies, we have a saying within our defense- “Be the giraffe, not the turtle.” We want to see everything that is going on around us to make the best football plays.