Using The Lag Technique to Slow Down Wide Zone Runs

The reason we felt that the lag technique would be a great fit for us here at Franklin Parish High School was that we typically have an undersized defensive line compared to the offensive line we see each and every week. Due to the large size difference, we incorporate as many outside shades as we can because a 185-230lb average defensive line would not withstand the constant down blocking an inside shade would get and hold up verse 265-315lb offensive line. We play a very tight outside shade and utilize the two gap-one gap concept (Bully). Together the two gap-one gap (Bully) technique vs downs and on blocks pair very well with the lag technique on reach/zone schemes.

The defensive line must understand that there are open gaps and closed gaps. 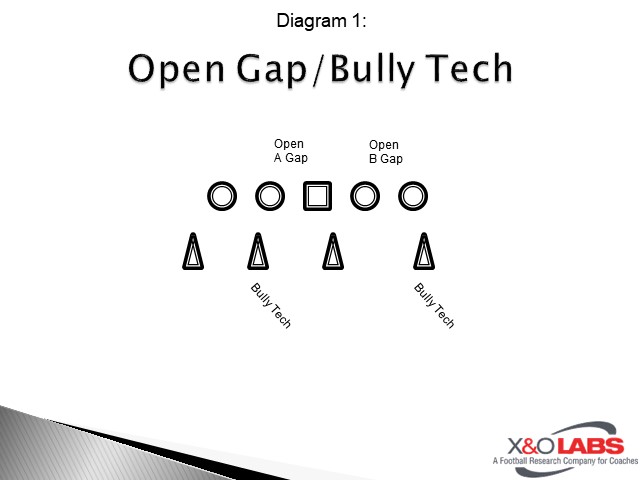 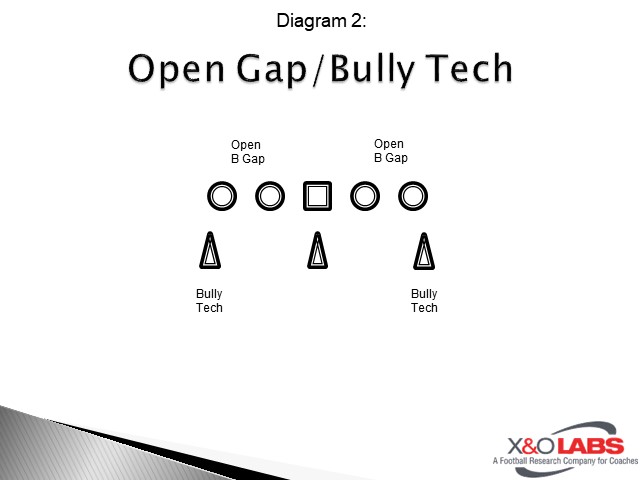 If the defensive lineman has an open gap inside of him, he will play a bully technique (very tight and aggressive outside shade).

In our opinion, we do not believe that a defensive lineman can effectively play the aggressive style versus the down block attacking the offensive line and be able to play the reach block effectively. The way we can sell the idea to our defensive line is that we do not care about the reach/zone block. The typical defensive lineman in most high schools will struggle at mastering the disruption of multiple blocks, so we really focus on the down block as the most important block we must disrupt. By disrupting the down, we feel we will put ourselves in a great position to be successful versus several offensive schemes (Power/Counter, Veer, Wing T) we see each year. 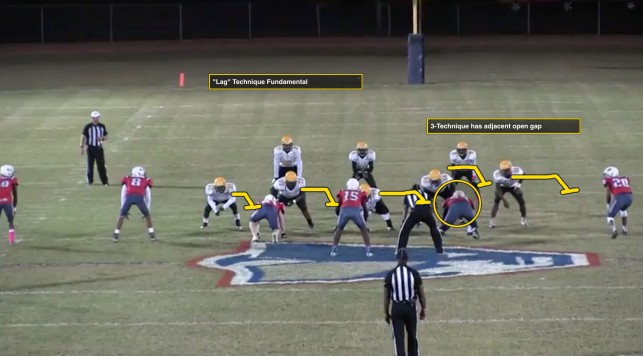 Once the OL has taken the reach step and the DL has taken his first step and realized that he is being reached, he must shoot his hands and press the inside shoulder of the offensive line up and out. Doing this will prevent the OL you are aligned on from getting to the next level and will also not allow the next inside offensive lineman to reach you. We tell our guys that if you are bullying then you can get reached by the man you are aligned on but must never allow the next guy to reach you. We run this technique because it will place the body of the defensive line in the cut back lanes and allows the linebackers to be aggressive fast flow players to anything outside.

Looking at Diagram 3 you can see how this will allow a single defensive lineman to eat two blocks. Lagging behind the reach and not allowing the next offensive lineman to reach you will allow the linebacker to run free. This will also play well with teams that utilize a quarter’s coverage system allowing for the back-side safety to be responsible for the backside B gap from depth allowing him to be slow to run fits and helping with any type of RPO or Read scheme backside.