Teaching Inside Shade (6i) Reads 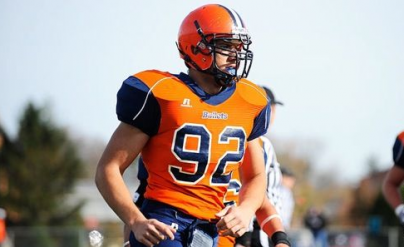 Editor’s Note:  Coach Weaver enters his ninth season as a member of the Gettysburg coaching staff and his eighth as the defensive coordinator in 2014.  Weaver will also coach the linebackers for the seventh straight season this year. Prior to his arrival at Gettysburg, Weaver served as the defensive line coach at Bemidji State University in Minnesota from 2004-05. He also spent two seasons coaching the defensive line and serving as the junior varsity defensive coordinator at his alma mater, Wilmington College in Ohio, from 2002-03. Weaver guided his players to multiple postseason accolades at both Bemidji and Wilmington, including coaching one to All-America status at the latter.

The C gap defender to your defensive line versus a TE is critical person in being effective at stopping a running game. With the C gap still being a focal point of attack for offenses the discussion on how you teach an inside shade player (6i) is extremely important. There are multiple options to stance, reads and reactions. This article will cover technique teaching options for your C gap players with block reactions for both options covered.

A defensive lineman’s stance is vital to having the opportunity to be successful every snap. A  poor stance will put a player at an immediate disadvantage. Having a good and simple stance progression to teach your players will give them a good base for having a comfortable and effective stance. The following is a partial stance progression that I currently use in teaching defensive lineman proper stance.

Get every advantage your opponent gives you!