Creating a Stem System for DL to Disrupt Blocking Schemes

Pre-snap defense line stems create the appearance of complexity, thus creating confusion while giving defense lineman sound responsibilities. Organized stems place blockers in conflict, create negative plays, force offensive lines to have sound blocking rules and allow defensive lineman to make aggressive plays and keeps offensive line pads off linebackers. Every organized and competitive team has spent numerous days working through defensive fronts and blocking schemes. Stems, in both odd and even fronts, place blockers in conflict and creates a defense which is destructive rather than reactionary. Any offensive line can block “vanilla” defensive fronts. Incorporating and using stems among your defensive front will make your players faster and more explosive.

At Sioux Valley, we have a mixture of players who put their hand down on the defensive line. We believe in an aggressive style of defense, which often places eight players in the box.  The reoccurring non-negotiable theme among our defense line players is “no one gets off the ball harder than us.” At Sioux Valley, we place athletes on the line and stems are one way to allow our athletic lineman to make plays. Our Head Coach, Dan Hughes, has integrated a lifting program which has yielded success in order to have athletic lineman who can get off the ball. Sioux Valley defensive linemen are extremely strong in the hips, core, and explosive muscles. This tactic yields success in pre-snap movement among our defense. Our players can be even faster and more explosive if we place them in situations which allow them to showcase their weight room gains.

Eighty to ninety percent of our defensive line strategy is gap alignment. Stemming allows us to show a gap and fill that gap, or show a gap and cross-face into a gap with which we were previously aligned. Every stem has a counter action. Just because we stem over, this does not show which gap is each player’s responsibility. Along with deceptive defensive line gap alignments, stemming allows second level players more opportunities to mix in simple blitz schemes, which appear very complex in cohesion with stems, but are very simple. Mixing in stems will also keep second level players pad free from offense lines blocking linebackers. 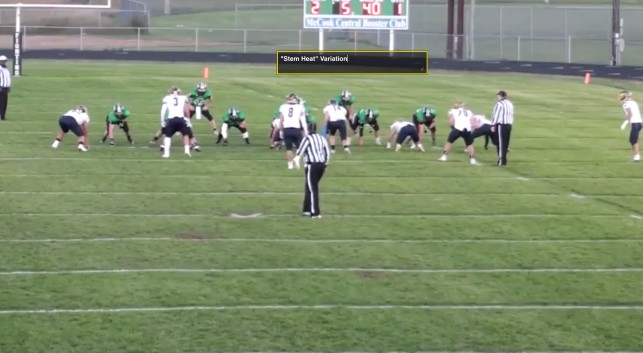 Sioux Valley is a communication-based team. With this pillar in our framework, stems force communication and the recognition of offense formations and alignment. Each stem is tagged with vocabulary, which dictates the action of each particular stem. Stemming action is dictated by the strong (Sam) and weak (Will) side offense alignment. Second level players establish which is the Sam and Will side. Defensive lineman should never have to think, only react. The defensive line needs second level communication to function as a unit. Every year, within the first two weeks, a defensive lineman will become upset for lack of communication from the second level because it is creating confusion on his stem. This leads to a healthy opportunity to reinforce communication, which leads to increased recognition of offenses and more complex reads. Stand up players will vocally state their position, such as “Sam left” or “Will right.” This commutation conveys on which side stems will take place based on the call sent in by the coach.  Here is the order of our communication to stem:

Our basic stem vocabulary using Sam and Will calls:

This is our basic vocabulary.  Upon mastery, you can begin to merge these.  For example, “Up Fluster.” Now players will stem to the weak side and return to the gap they started on. As an introductory to stems, we simple use Fluster, which in more complex thought would be “Down Fluster”

We start with simple stems during the summer and from day one. While we may stem as little 10% to 50% in game action, many of the reps that we drill on in practice and team time contain pre-snap movements. The more time defense lineman spends practicing stem actions the quicker and more confident lineman become. Practicing stems more than we use them also forces team communication and defensive line engagement during team time. Now defensive lineman has to cognitively engage in team play, rather than the monotonous activity of beating the gap or JV player across from them. Stemming also forces defensive lineman to know defensive techs/alignment.  In order to build vocabulary and practice stems, here are just a couple ways we use to build on stem progression:

When do we Stem?