DB Article – Training the “Nub” Side Corner in the Run Game

Editor’s Note:  The following transcript was written and recorded by Mike Kuchar.

It’s clear that many offensive coordinators try their hardest to manipulate formations so that they get their tailback in a one on one situations with a Cornerback.  This is typically done by having the strength of the formation away from the Tight End and having the Corner aligned on the same side of the Tight End (Diagram 1). And why wouldn’t they?  Corners have traditionally been known as one of the weaker tacklers on the team.  Well, there are ways to train your "nub side" corner to make plays in both the run and pass game- and Coach Hendricks details all of these methods in this report. 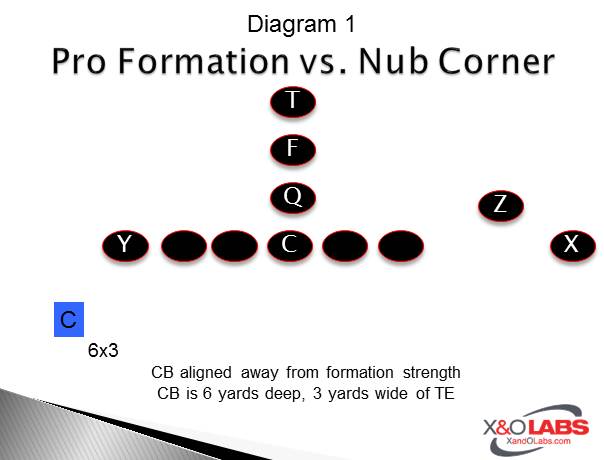 Nub Side Corner in Man Coverage

In most occasions, that backside Corner will be in a man to man situation with that backside Tight End.  Hendricks will have his Corner at a 6x3 alignment (which is six yards deep, and three yards wide) but maintaining out side leverage. "He needs to show up against the run, but may not needed to contain the football."  According to Hendricks, he will often have a Defensive End or Linebacker to that side as the contain player.  The reason is mainly due to zone read schemes that will arc the tight end.  "The tight end release looks like a pass route," says Hendricks.  "North Carolina busted it against us two years ago because the tight end ran the boot off the inside zone play (Diagram 2)." 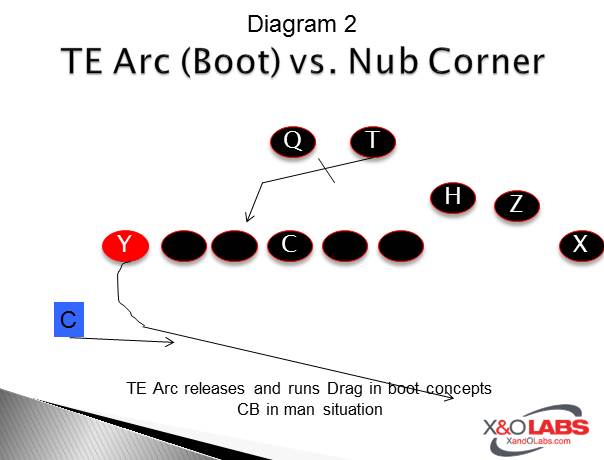 Hendricks will use what he calls a man-on-man key in these situations.  "We read high and low hat of Tight End," said Hendricks.  "If the Tight End blocks, we come on hard vs. run.   If the Tight End releases, we stay over the top and keep leverage on him, but we can’t stay stride for stride with him."  Many times when the Corner is alone on that Tight End, Hendricks will play a "I and O" (inside and outside coverage) with the remaining linebacker to his side against the Tight End and the back (Diagram 3).  "What we prefer to do is what we call ‘Joe’ where the Corner will play tight end regardless and the linebacker plays the back (Diagram 4).  "The Tight End could crack linebacker and they can swing the back (Diagram 5).  You need to have both because of the crack scheme.  If the Corner is manned up, he will not slide or shuffle.  He has to chase any true crossing route to work though up field shoulder."