From a defensive perspective our goal is to disrupt the offense as best we can, allowing time for the rush to connect, and making the quarterback throw something they are not comfortable with.  Our philosophy at Coldwater High School is to collision receivers at different points in their routes, thus making the timing of the offense disrupted.  By getting our hands on receivers we are hoping to also create a smaller completion window for the quarterback to try and fit his pass into.  If we can disrupt the read, and get some time for the rush to get the quarterback to move his feet and reload then he is also not going to be as accurate.

We try to accomplish our goal in several ways and techniques.  We have a press technique that many teams use, especially when they have superior athletes to their opponents.  We have the typical off technique where the secondary players give cushion and react to what is happening in front of them.  However, our favorite technique is the “catch” technique, where we wait for the receiver at 5 yards and then let them turn us into the route.  This has been most effective at stopping offense from using any kind of short game, and also intermediate routes timing is off as well. 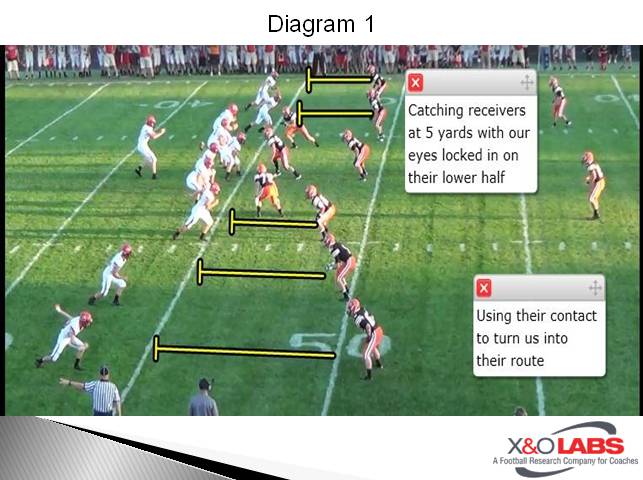 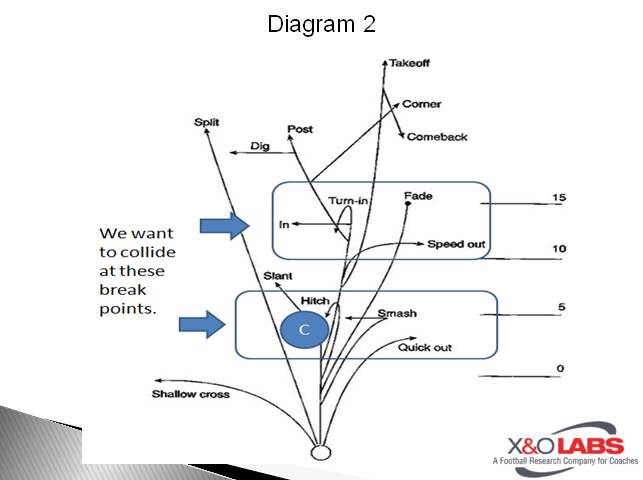 Disrupting reads is a big part of our defense, but we don’t let it be a detriment to our scheme.  We do not walk all the way out on a receiver that is lined up 5 yards or closer to the sidelines, that receiver can only do 2 things.  Most likely come and block you, which is why he lined up that far out in the first place.  Or because he is trying to create some space for his route that he is going to run inside somewhere in the first place.  We have seen too many teams concerned with getting their hands on receivers that they will take themselves out of plays simply by alignment.  Or they will chase a receiver and take themselves out of position to make a play in their area they are designated.  If a receiver wants to run out of his way to avoid us, or the offense wants to put multiple people in a zone then we will cover those guys with one defensive back.

We want to play the receiver from the “top down” by disrupting the easy pass first, and working our way into deeper routes.  Once we are past 5 yards we don’t have to worry about quick game, at ten yards we are looking for outs, flags, an in, or a post.  Then if the receiver hasn’t committed to breaking their route after fifteen yards it is likely a fade or vertical route.  Having inside leverage we want to take away the easy pass inside first.  But also by having inside leverage we want the quarterback to have to throw to the outside, hopefully putting the sideline (our 12th defender) into play, and it also makes the throw longer, thus reducing accuracy.  I think all defensive backs coaches have to worry about giving up the deep ball first, and work everything else off of that.  By taking on just half of the receiver, because he turns us, we are “catching” him at 5 yards, it has to slow down the receiver.  The aiming point for contact is the near pectoral with our close hand.  Never want to come across and gamble on a big hit, because our momentum has to be backwards and ready to run in the hip pocket of the receiver. 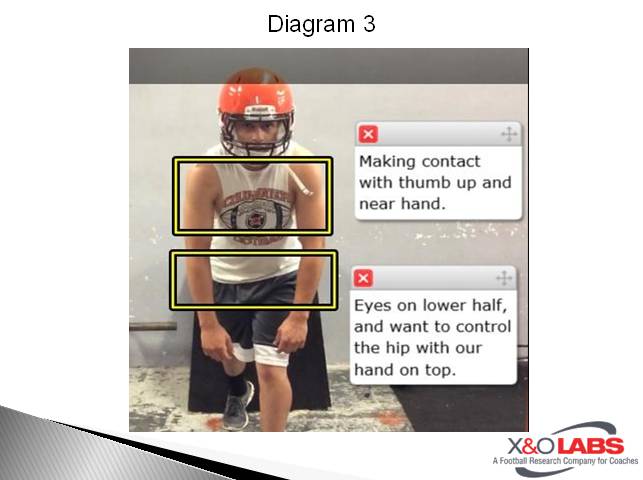