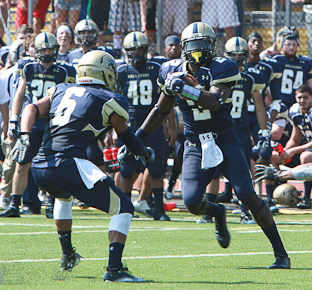 Our secondary and linebackers are taught to play physically in pass defense. Physical play does not begin when the ball is in the hands of the receiver, it begins at the line of scrimmage. Our version of the Cover 2, our most successful coverage this season in terms of interceptions this season, has placed a premium on putting hands on receivers and tight ends. "Hands-on" has become a common phase in the secondary in our Cover 2 look, particularly with the cornerbacks. Our philosophy centers on the idea that a quarterback has approximately 2-3 seconds to make a decision in the pocket before reverting to either a "scramble drill", sack, or hurried throw. By having our cornerbacks and outside linebackers re-routing receivers, it will disrupt the timing of the quarterback and receiver. Our ultimate goal is to cause turnovers by forcing the quarterback to make the most difficult throw or settling for the last read in his progression.

Placing a premium on physical play in the secondary will also cut branches off of the passing tree. What I mean by that is that receivers will often be forced to break off routes early, or resort to a limited number of routes. Physical play makes it difficult for many pass route combinations to fully develop before the rush gets to the quarterback, as we saw with many offenses who gave us a high percentage of 3-step routes. This plays into our defensive concept of stopping the big play.

We have different alignments in our Cover 2, but our philosophy in every look remains the same. In our "Hard" Cover 2, our corners are lined up one to three yards from the line of scrimmage, giving him the least amount of room to work a release. We set up in an outside shade of the wide receiver, with the inside foot parallel to the groin of the receiver. Our feet are even and set underneath the hips, providing a solid base. The body is in a comfortable, hands are above waist level with the tips of the fingers facing forward. We coach the hands to be relaxed and ready to strike. Like any track coach will tell you, a loose, relaxed muscle travels faster than a tense one. The objective of our cornerbacks in Cover 2 is to force all threats inside towards our safeties and Sam and Will backers. While being physical may lure some corners into being overly aggressive, we coach our defensive backs to jam with their feet first. By keeping the initial outside leverage using short, quick steps to stay in front of the receiver, we can disrupt the timing of a pass route. We have two drills that we use to emphasis our footwork in Cover 2, the importance of forcing your opponent to the inside, and to not unnecessarily give up ground, respectively.