Like most coaches, I feel the best way to teach anything is through a part to whole progression. To do this, we break down each individual step, create a drill, rep it and put it to use in practice so it will be effective on game day. This report will break down the base press man progression we use and teach at Campbell University. This is a four-drill progression that is designed to teach stance, eyes, footwork, posture, release and strike. We will focus on multiple techniques that will allow us to be physical with receivers, disrupt routes and make plays on the football.

In teaching our press man stance, the key is starting with a great foundation. We align players in an upright position with feet armpit width apart. Every player is different, taller guys might need to have a wider base, as will guys who don’t bend as well. Adjust each players’ base to their own comfort level without compromising your coaching.

Next, we teach the bend. I will give players a “stance” command and they will snap down into a press man position. To effectively get into a respectable press stance players must bend at their three power angles. Players must bend fluidly at the hips, knees, and ankles. At this time, you can measure ankle flexibility by noting whether the players’ heels are firmly on the turf.

With the base side, we move on to the upper body. We teach a nice flat back and relaxed chest with eyes up and on the coach. Any arched lower back or protruding chest will not be acceptable. If the player exhibits upper body stiffness tell them to stand up and “shake it out.” Before putting the player back in press stance, we make them aware that as they bend at their three power angles to “drop” their head and eyes and let their back flatten naturally. When they are comfortable and have a flat back, then we tell them to look up. Bring their eyes to a target while maintaining a flat back. The flat back will eliminate most chest stiffness as well. If there still is some chest protrusion, just remind the player to relax his chest. 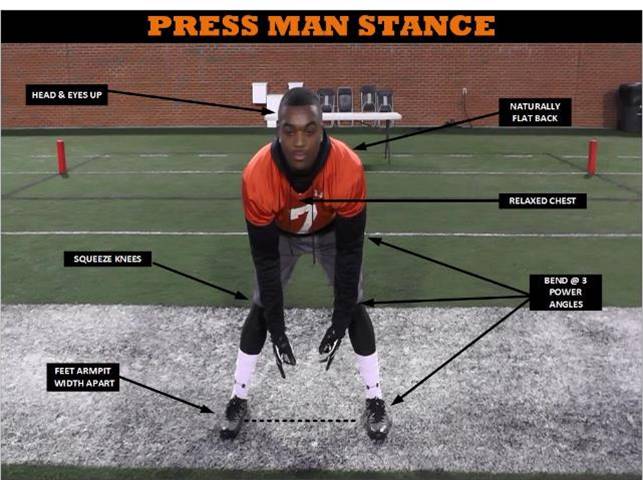 Read drill is designed to teach the proper base and first reactionary step for defensive backs playing press man. Start the drill by aligning the defensive back(s) on a horizontal yard line in an upright position. Make sure that his toes are on the line. I like to use the edge of the sideline as my starting point. Use the line or lines as a visual reference to make sure DB is stepping properly.

If you are working with multiple DBs at a time, make sure that you stagger their alignments on different levels. On the coaches “stance” command DB will snap down into a press man stance with eyes on the coach.  The coach will give a directional point, left or right, and echo the command “read”. On coaches’ command, DB will take their read step with coaches’ directional point. On each “read” command the defensive back will take a 3-inch lateral read step. The step must be subtle and under control. The coach must make sure the step is within DBs cylinder.

Common mistakes by players are overstepping (long steps), stepping too fast, and stepping with both feet. To correct overstepping, we tell the player to step from armpit to shoulder with a read step. It will make the player aware of keeping his feet in his cylinder. Correct fast steppers by slowing the drill down and echoing words like “patient” and “subtle”. Finally, players who step with both feet, make them aware that the foot away from the read step is active but stationary. The foot must remain stationary because after coaches read command and read step by DB, the read foot must come back to balance in DB’s home position. Coaches repeat “read” command three to six times. Make sure player takes good tempo’d lateral 3-inch steps. Players must always finish in the home position. Once defensive back has completed the drill, the coach will give a “melt” command and they can come up out of their stance. 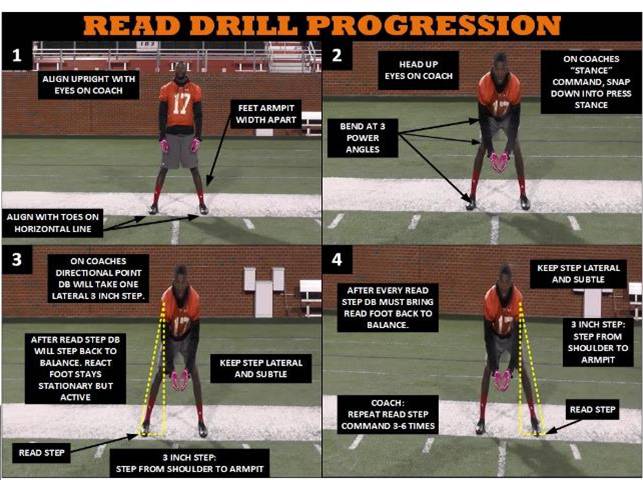