Press coverage with cornerbacks is an advantage! Pressing with the CB’s gives us route elimination based on releases, instant re-routes, interruption of timing, the ability to put more defenders around the ball, and the fulfillment of a competitive DB’s nature. I’d like to identify that press isn’t a form of a physical bump and run method but rather the concept of disrupting WR’s while staying on top of their route for as long as possible. QBs and WRs will run their routes on air every day and develop timing together. Now let’s say they do it again, but I place a barrel in front of the WR. Their timing will already be different. Now imagine if this barrel moved to stay on top of the WR and cut his angles off! The timing they worked on is now off schedule, and that’s why press is an advantage. Different coverages dictate different elements of press but in this case, we will focus on press coverage used in our quarters and cover 1 concept. I’ll spend more time talking about the release part of the press because it's where common technique issues can be cleaned up.

A couple of years ago I watched all the top CBs in the NFL and wanted to see what made them the best at their game. There were different styles of play but the one thing that showed up with all of them is they moved with efficiency. Moving with efficiency is to get from point A to point B as quickly as possible with the least amount of energy. A lot of words like fluid or smooth would describe what we call being efficient. All these top NFL CBs moved efficiently that allows them to obtain continuous movement. They took steps that continuously directed them to their intended direction without losing any speed. These elite DBs didn't take "gather" steps which I would define as an unnecessary extra step in between transitions. This was the difference from the elite to the rest. It showed up, especially in press coverage. From this, we developed how to obtain continuous movement in our DB’s. If we can move with efficient steps in press coverage, we feel we have the advantage. 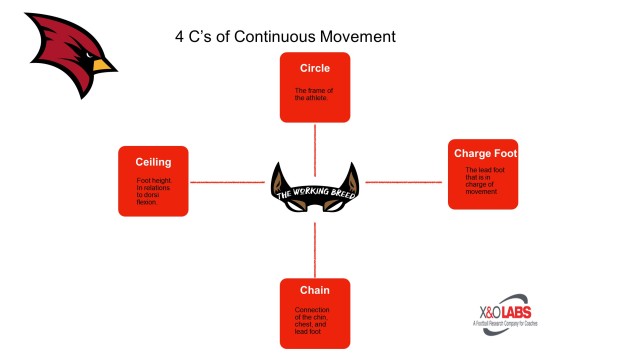 Circle: Staying within our frame. Our frame must be defined in a 360-degree manner. The width of our frame is our shoulders down to the floor. The front to back part of our frame is the length. To find the length you can stand on one leg and put your other foot behind the standing foot while keeping it flat (dorsi) on the ground. Take the width (side to side) and the length (front to back and drawing a circle around them. That is your frame. Our objective is to stay in our frame all the time. 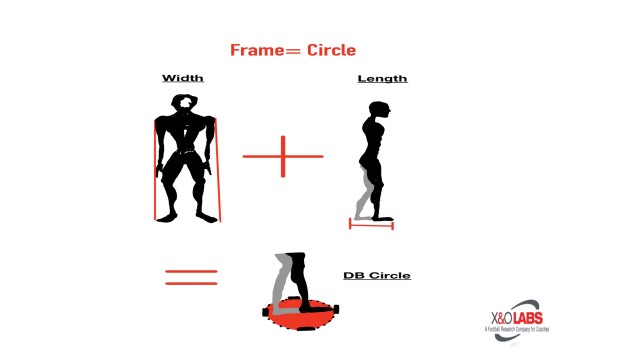 Ceiling: It’s our foot height We want to keep our feet dorsiflexed while pedaling, scooting, and shuffling. This allows us to keep our feet under us and in our circle. Our foot height should be like a heart monitor in transitions. For example, when backpedaling and then opening the height on the monitor should all be the same. What I mean is the rhythms should all look the same until you get into a run. We will gather step when our rhythms are inconsistent. An example would be sliding our feet on grass then picking them up to transition.