Any screen offense will admit to the maxim that the timing of the offensive line is imperative in making the scheme successful. We’re not just referring to the timing necessary to release from the line of scrimmage on screen concepts, but we’re also referring to the timing necessary to make blocks on perimeter defenders. While it may be true that the “big uglies” are getting more athletic with each generation, having them square up against perimeter defenders like safeties and corners require great technique and execution. In this case, we present our research on how coaches are training the pre-snap and post-snap timing off offensive lineman in the screen game.

Before we differentiate our research based on the separate types of blocks offensive lineman will make, we wanted to summarize what we found were common threats in teaching offensive linemen to block the screen game. Below were some generalities we found in our research:

Teaching the delay screen concept to offensive linemen usually consists of three phases, the flat blocker, the alley blocker and the peel-back blocker. What you’re naming those types of blocks are never as important as the technique in which you’re teaching to execute them. Coaches have different fundamentals they stress to get these blocks accomplished. So we wanted to differentiate our research based on those three specific components and how coaches are teaching the timing of these blocks.

2-Count Methodology: At Dartmouth College, the screen game is based off the drop back pass game and offensive coordinator Keith Clark uses a slide protection scheme to the side of the screen. It’s basically empty protection with a two-count methodology. “They have to have the mental clock of 1,001 and 1,002 in their heads,” said Coach Clark. “They all want to rush it when they get to the field and they have to slow it down.” In order to make sure the timing and the technique mesh, Coach Clark will teach what he calls a “yank” technique which is a pass set on the line of scrimmage to the direction of the slide.  “We want to ‘stab and grab’ with the hand on the side the defender rushes,” said Coach Clark. “When the ‘count clock’ goes off in your head, yank or violently pull the defender down past your hip, kicking back with that same side leg and release on your screen path.”

“If the 3-tech is to the boundary and we slide to him. He will naturally butt side the slide protection so he will become an A gap rusher real quick. That allows us to release the guard first and the center must engage and use a yank technique on the A gap player and be in the screen (Diagram 8). If it’s a 4-techinque such as in Okie fronts, he won’t make it into the A gap, so the guard will yank and the Center will have the open gap and he may release first (Diagram 9). It’s about how the defense rush reacts. Which lanes to they take?” 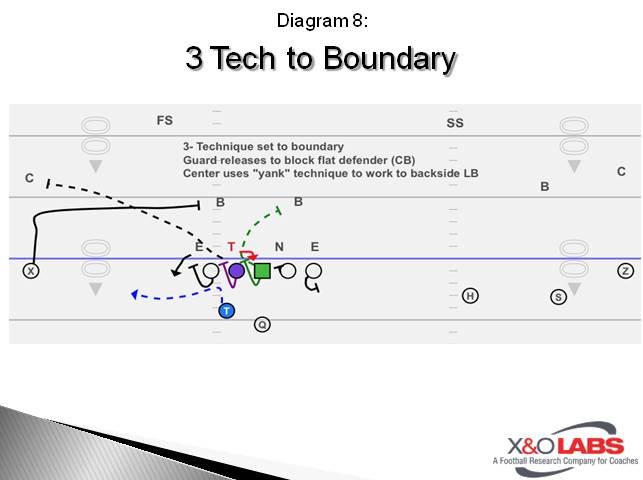 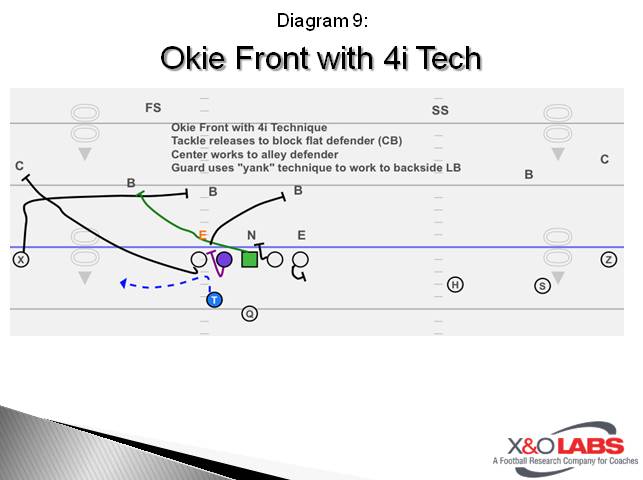 To study this technique, click on the video below: