The screen game is all about timing, both with determining the time to call it and developing the timing of the execution. When it’s called at the right time, the play can be lethal, particularly if it’s done the right way. It can yield big numbers in efficiency and can be a back breaker for defenses that don’t expect it. While we found that most coaches utilize slow or slip screens, 91 percent according to our research, this study consists of exactly how these coaches are efficient in scaffolding their screen concepts.

But before we delve into the specifics on how timing is so essential in the screen game, we wanted to explore the formation structures that coaches were using to run them. 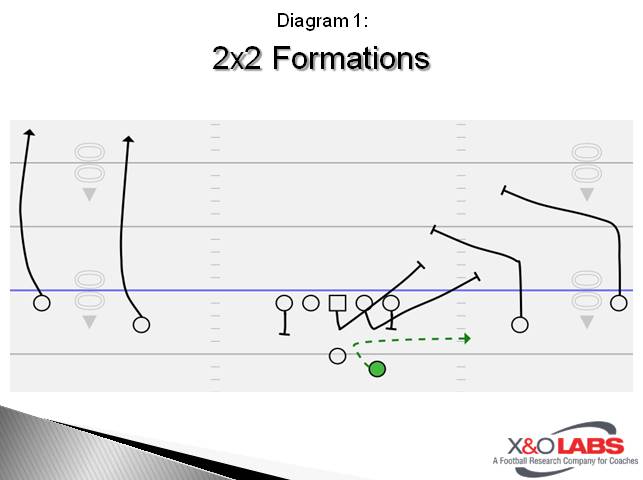 Not surprisingly, 2x2 formation structures ranked as the highest formation in our researching of the delay screen game.  Most spread sets are 2x2 opens sets by nature. According to our research, some of the reasoning as to why coaches prefer their screen game out of 2x2 sets includes:

Some of the more specific responses from individual coaches include:

Landon Miller, Lincoln Northeast High School (NE): “We use 10 personnel to gain advantage on the edge of the defense for running concepts. This makes the defense align in a way that gives us a slight advantage in the screen game with that formation. We also do a lot of half field reads out of our 2x2. We use our screen game to keep the blitzers at bay since we only use a 5 man protection in our half field concepts.”

Christian Raphael, Munich Cowboys (Germany): “We like 2x2 against two deep safeties because the linebackers usually get caught spot-dropping on the hook/curl and are easier to block for our wide receivers and offensive line.”

“It allows us to spread the field and run off defenders with our vertical concerts. It cleans up the box for our offensive line and allows them to show pass and get to there landmarks.”

“A balanced formation because we don't see much blitz or zero so the balance formation allows our slot receivers to draw attention from OLB and our OL to block the ILB who may be spying the RB on slow screen concepts.”

At Dartmouth College, offensive coordinator Keith Clark chooses to run his running back slip screen to two receiver sets. But what he will do is have number two clear the top off the coverage number two and crack with the outside receiver  (Diagram 2). Number two runs off and deep stalks the safety, while the number one receiver is still the crack to the first LB inside. It helps to clear the alley and their rules stay consistent. 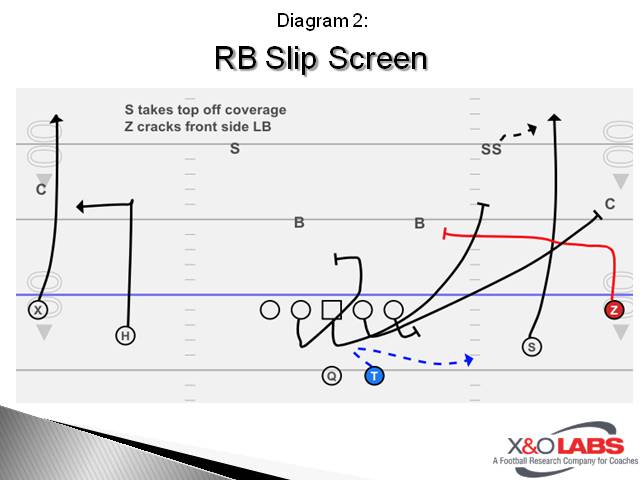 To study game film on this concept, click on the video below: