Rose-Hulman Institute of Technology (IN)

Editor’s Note:  Coach White begins his third season on the Rose-Hulman Institute of Technology coaching staff and his second season as offensive coordinator in 2013.  White also serves as the team's recruiting coordinator and the offensive line coach. White joined the Rose-Hulman coaching staff after serving assistant roles at the University of Cincinnati, the University of Notre Dame and the University of Maryland.  In his first season at Rose-Hulman in 2011, White's offensive line provided blocks that allowed Kyle Kovach to earn the NCAA Division III all-purpose yardage championship.  The Fightin' Engineers also established a school record for total offense with 625 yards in a 53-50 win at Anderson as part of a second place season in the HCAC. 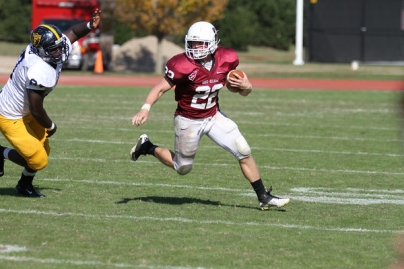 For the Rose-Hulman offense, as with many offenses at every level of football, playing fast is of critical importance to our success.  In 2013, we averaged 85.5 plays per game.  However, we strive to ensure that we do not sacrifice speed for precision.  Our goal every year is to identify the plays we feel are critical to our success as an offense and then find ways to drill these plays.  Our staff works to develop drills that teach the requisite skills to execute the play and simultaneously emphasizing how to play fast.

Each play we install follows a similar teaching progression.  We will start with the coordinator presenting an overview of the play.  During this portion of the install, the coordinator will inform the offense of the purpose of the play, when and why the play will be called and the method by which the play will be relayed to the unit on the field.  Each position coach will then meet with his unit to cover all of the particular rules and skills required by that position group to execute this play.  All of the major coaching of the play is done in these meetings.  On the field, we want to be able to practice as many reps as possible without stopping the drill to coach.

During our individual periods, each position coach will drill the skills necessary for each play.  These periods are the last opportunity for the position coach to work with his players at a teaching pace.  Once we come together as a full offense, we want to play as fast as possible.  We will employ many different drill formats to practice our players.  One of our favorite ways to drill a play is in a Half Line format.  In this setup, one half of the offense preforms a rep of a play, while the other half of the unit will prepare for their rep.  Coaches can choose to work the same play in each group or they can choose to work complimentary plays.  For example, we will run the frontside of a Zone Read scheme on one side then flip to the other group to work the backside.  We will also perform the same drill with both groups work the backside (or read side). 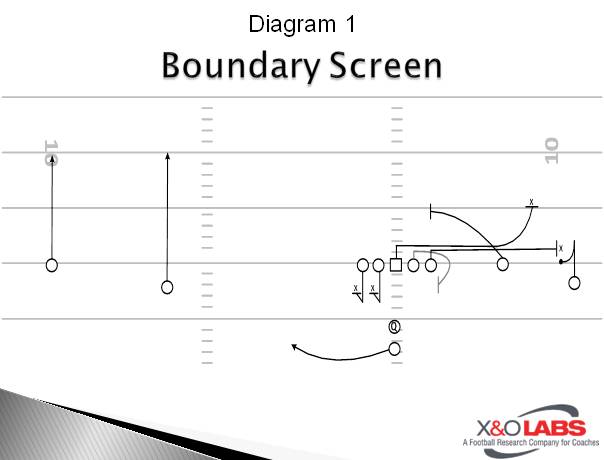 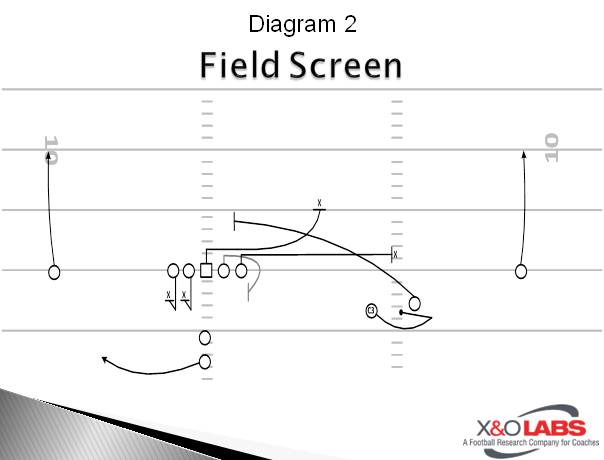 - Ball on the near hash (Screen run to boundary) = Sidewalk is the inside edge of the numbers.

Now that we have outlined the different criteria the Offensive Line must understand, we can apply these factors to our Quick Screen.

- Protection:  Empty, with slide to the screen (Odd = Area)

As the above rules mention, the Offensive Line will block Empty protection.  Our Empty protection is a Half Slide.  In the case of a screen, we will send the slide side to the screen and the backside Guard and Tackle will block #1 and #2 on the Line of Scrimmage, respectively.  For the linemen releasing into the screen, they are taught to “Club” or “Shove” their defender based on his alignment.  A defender aligned to the side of the screen will receive a Club from the lineman.  A Club is executed by first giving the “illusion of movement” on the set.  We teach our Offensive Line to throw their head and shoulders back and exaggerate their set without losing very much ground.  The lineman will take two little kicks and entice the defensive lineman to work his shoulder.  As the defensive lineman attempts to grab the shoulder, the Offensive Lineman will pull the shoulder back and simultaneously club the defensive lineman in between the back of his numbers before releasing into the screen.