As a valued member of the Missouri Valley Conference, the University of North Dakota is built on running the football. But they also have a 6-1, 180-pound slot receiver with an uncanny ability to find and exploit space in the screen game. It's led him to produce over 75 catches in two seasons for the Fighting Hawks. So, it made sense to merge their most efficient run concept (Power) with their most efficient screen concept (Tunnel). It’s simply termed “24/25 Pilot.” The number system denotes the run game while the concept name is Tunnel. The merger has produced over ten yards per play the last two seasons and has become a favorite in offensive coordinator Danny Freund’s menu. “It’s such a safe play,” reiterates. “Even if you get tackled on the line of scrimmage it’s second and ten. We don’t worry about lost yardage.” 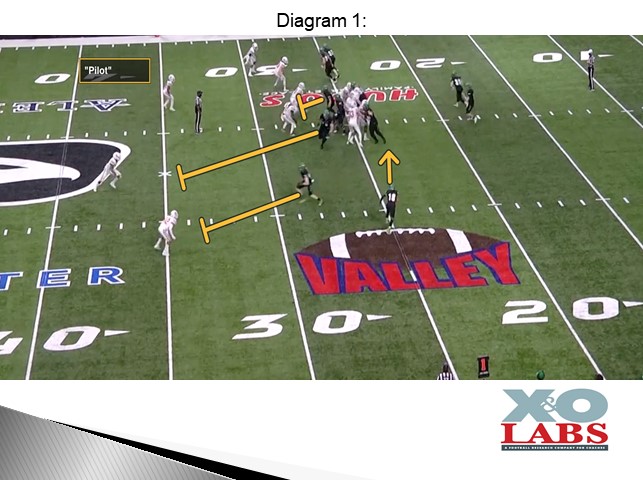 Best Practices: When to Call

Because of the run action, these calls are traditionally non-consequential down calls (first or second down) but Coach Freund will sprinkle them in on third and long scenarios particularly if he finds a potential voided or tight alley player to the screen side of 2x2 formations or a numbers advantage on the perimeter in 3x1 formations.

“Creating Stretch Away from The Screen”

Tunnel screens are built off creating space in the middle of the field. And space stems from misdirection So, it becomes essential to create forms of misdirection that generate horizontal flow from defenders. In this concept that misdirection is generated in two ways: the false pull of the screen side Guard and the outside zone path of the running back. The screen side guard is simply taught to block his normal power rules. But instead of skip pulling, he will open pull opposite the screen to get second-level defenders moving. 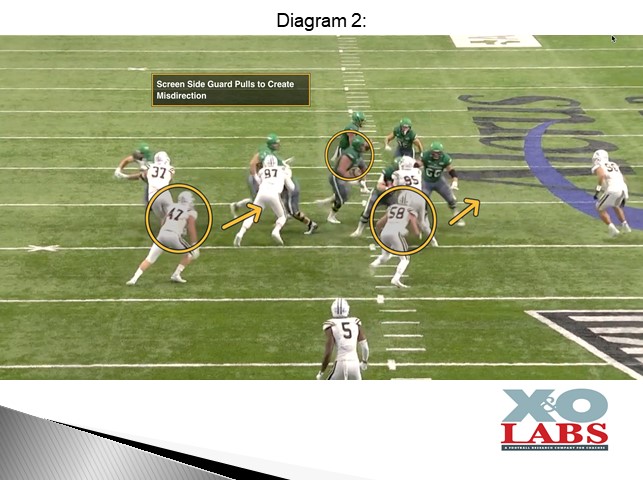 The ball carrier will create the second form of misdirection by working an outside zone path away from the screen side. He will automatically line up to the screen side when “Pilot” is tagged. As explained below in this report, there may or may not be a ball fake by the quarterback. 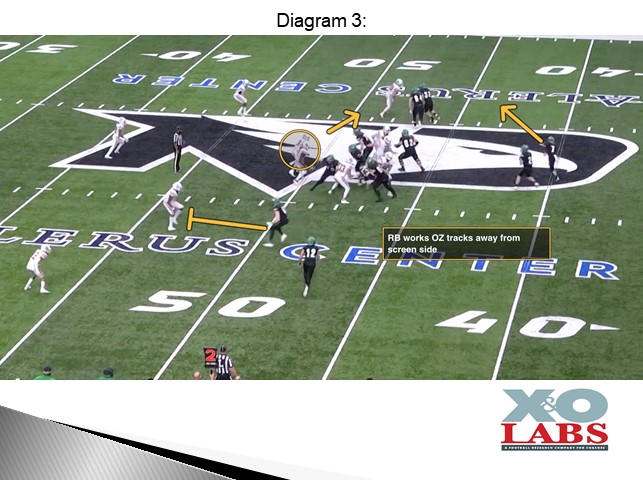 In 12 personnel Pilot, Coach Freund will have both tight ends arc opposite the screen side as a means to provide misdirection and create more space, for the tunnel concept. 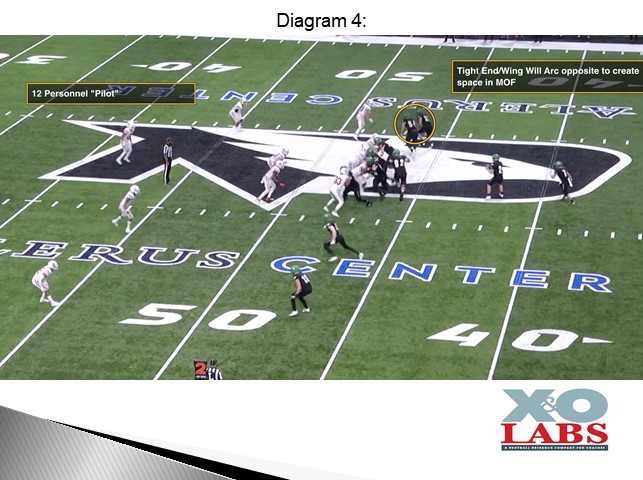 In "Pilot," the intended receiver's job is to find his way inside the screen side Tackle's kick-out block and then work his way back out. As Coach Freund will tell you it's a "feel" thing which is why many of the Fighting Hawk's Pilot throws went to one particular receiver. Post-snap, the receiver is taught to generate three foot-fires (Coach Freund talks about stepping on three ants) then come flat down the line of scrimmage. At that point, the ball should be in the air. 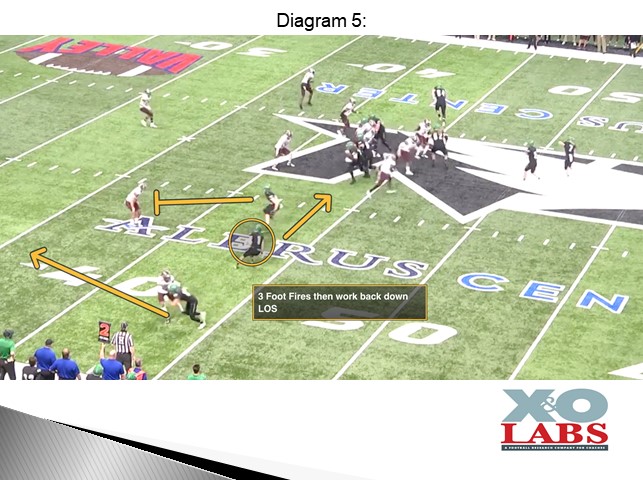 North Dakota will run Pilot to both double width and triple width formations. Essentially, whoever is not the Tunnel receiver will be asked to block the most dangerous defender on the screen side. He is known as the screen starter. If his block is ineffective, so is the concept. His technique is to kick that defender out so that the receiver can come underneath.

In double-width formations, number one is typically catching the screen, so the slot will handle the corner or most dangerous. 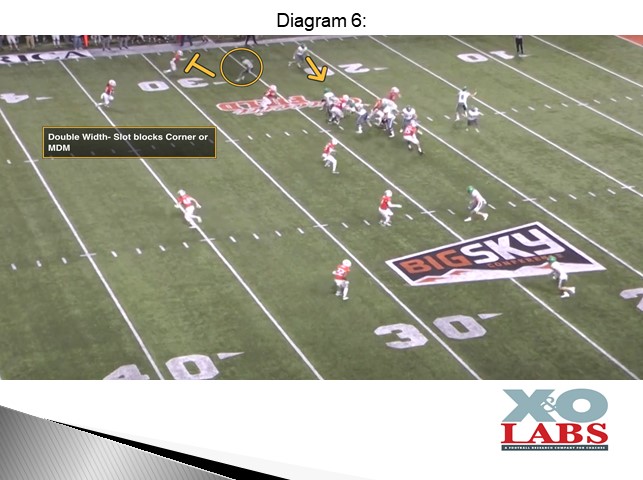 In triple width formations, either the number two or number three receiver is the target based on the tag. So, number one will traditionally block the corner with the non-screen receiver blocking most dangerous. 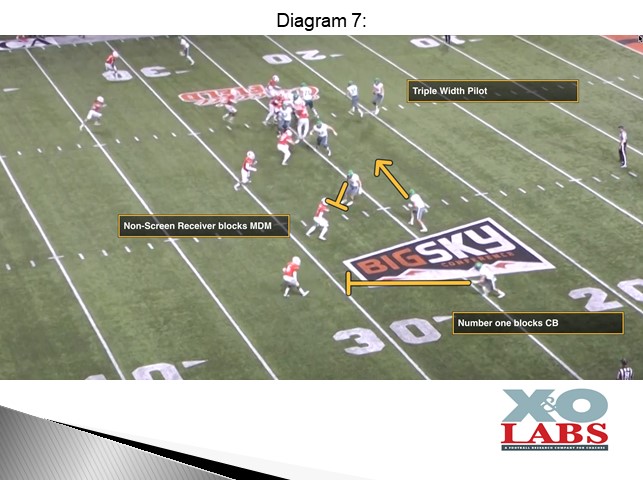 There are instances where the number one receiver to the trips side will be the screen receiver. In these circumstances, number two and number three will block the most dangerous. According to Coach Freund, this may not need to be the corner, particularly if he's loose. The ball is not going out to the perimeter anyway. 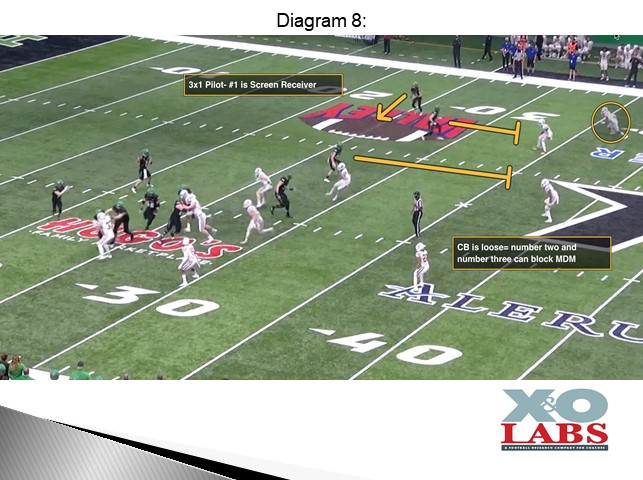