Every offense should have a staple play that they can hang their hat on. The Virginia State offense has used the bubble screen as a key component of its offense, and we have been very successful utilizing it. We teach our quarterbacks that as they go through their pre-snap read and we have an advantage in numbers, they can automatically check to the bubble. We feel confident in allowing them to do this for two main reasons. The first reason is if we had a run play called, we feel checking to the bubble is no different from checking to a perimeter run which might be a better play in that situation creating a positive gain on the play. Secondly, if we have a pass play on and we get numbers checking to the bubble gets us into a higher percentage completed pass play. So, we get the best of both worlds. Our goal is to always make the defense defend the bubble, this helps to give us leverage in our run game and marries perfectly with our RPO concepts.

We are a formation offense that likes to create match-up opportunities to create explosive plays. Our goal is to get our best athletes on the field and get them the ball in space. We discovered that our quads package did exactly everything we wanted. It also added a dynamic dimension to our bubble screen. It put our best athletes on the field, in space, and gives us a favorable match-up and numbers at the point of attack. It also provided favorable blocking angles on the perimeter that put us directly on the third level if executed correctly. We also saw an increase in YPC out of our quads package. 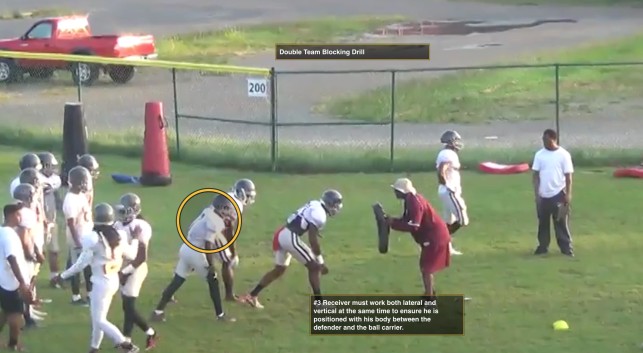 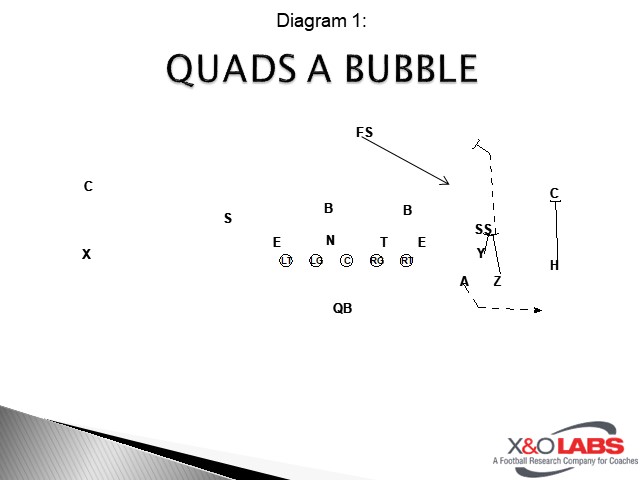 It also creates immediate movement by the defenders and allows for better angles and the immediate closure of space with our guys stalk blocking in space. We want our blockers to “go to where the defender is going” not where he is currently. We must anticipate movement. 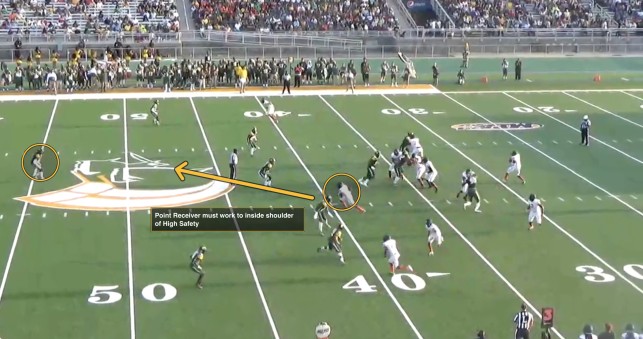 Before addressing the concept, it’s important for coaches to develop the mentality for receivers to block in space. The first drill that we find to be the most important is the double team at the point of attack. We will have a coach holding a simple handheld bag, and at the snap of the ball, we simulate the double team. We will work the double team from various looks. We will incorporate motions because they change blocking angles on the double team, so we want to remain consistent in our technique

The #2 Receiver is concentrating on anticipating the defender working that will be working through him. His primary goal is to not to let the defender split the double team. We also coach him to progress his eyes upfield through the alley because he will need to be able to come off this block and climb to secure the ally defender using his stalk blocking technique.

The #3 Receiver is coached to anticipate immediate lateral movement from the pressed defender. In this event we teach our receiver as he engages in this block, he must work both lateral and vertical at the same time to ensure he is positioned with his body between the defender and the ball carrier when the #2 receiver comes off. He is also taught that he cannot cross his feet over as that will cause him to lose control of the block should the ball carrier cutback because of pursuit.

We teach our receiver that he must treat his technique as if this is a one on one block. The ability to double is a bonus. We must be prepared if the alley player reads this quickly and runs the alley hard right now.