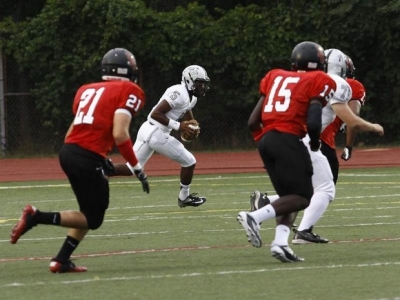 Our offense, while somewhat dictated by personnel strengths from year to year, is firmly rooted in the outside and inside zone schemes. Variations of the outside and inside zone encompass probably 80% of our run schemes. This allows us to minimize the amount of thinking by our offensive line and helps us play at a fast tempo. The use of simple adjustments presents the illusion of complexity to the defense and meshes well with simple variations in who we’re reading, secondary manipulations and other tags. We are constantly saying, “We have two run plays!” While we certainly have more than two run calls, at our core we going to make our living on the outside and inside zone.

One thing that makes us unique is our ability to vary which front 7 defender we are reading all within our basic OZ and IZ schemes. The “zombie” concept, which will be the focus of this particle, is a variation that we picked up from current Indiana State Head Coach Mike Sanford while he was the OC at Louisville. As Coach Sanford explained to me, the zombie concept involves a zone scheme on the frontside of the play and a man scheme on the backside of the play. Hence the term “zombie” (Zone Onside…Man Backside = ZOMBie.)

The main thrust of the zombie concept is that it allows us to read an inside linebacker. This puts a 2nd level defender in conflict rather than the backside defensive end on our traditional zone read scheme, the front side defensive end on our flow scheme, or the backside tackle on our midline scheme. We can run the zombie concept off of our outside zone read action or our inside zone read action, depending on the game plan that week as well as the strengths of the opponent’s linebackers.

When we have the correct personnel to do so, we absolutely love the stretch play at Plymouth. It allows us to get our best athletes the ball on the edge, which has the potential to be explosive at any level of football. Once we have established the outside read play, teams will often tell their inside linebackers to sprint laterally as soon as they see stretch action from our offensive line. This is where the zombie concept becomes so dangerous.

More often than not, that back side linebacker will sprint himself out of his gap integrity as he tries to get over the top. As he flies into the play side B/C gap to help with stretch, the QB will end up running right behind his shoulder pads. 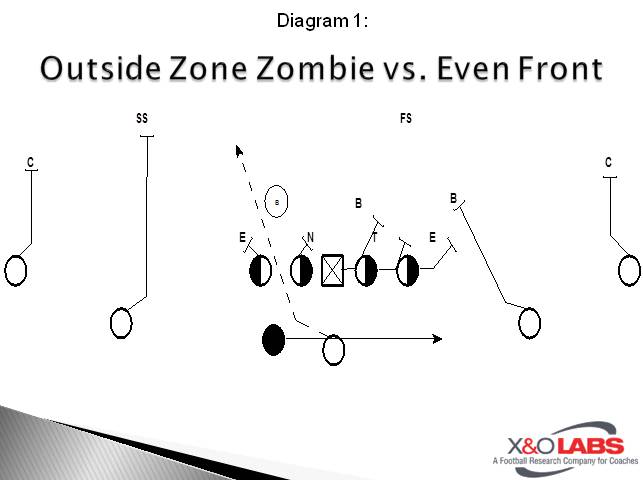 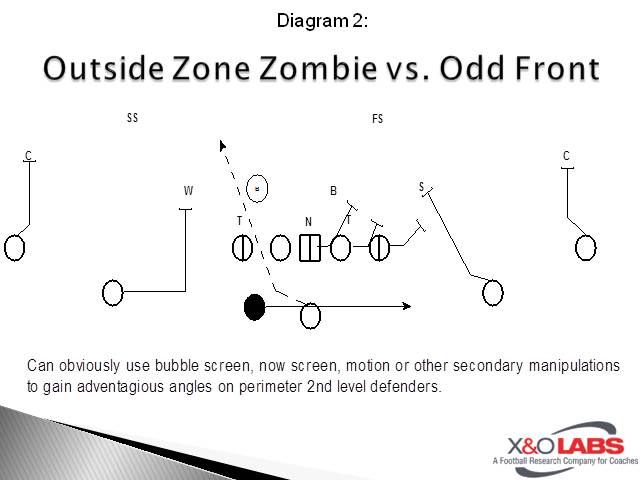 The rules and adjustments for outside zone zombie are as follows:

Play Side Tackle, Play Side Guard, & Center - 1st step is a flat sprint step looking to gain a man and a half. Stay low and work the back side hand to far side number of the defender followed by the play side hand working over the top of the defender. If he is unable to execute the reach, execute the proper tandem concept as a last resort.

Back Side Guard – Against a zero technique nose guard, he will combo with center driving to the play side. Against a 1 or 3 technique, he will step at the crotch of the on defender and drive. It is critical that he create movement as the quarterback’s running lane depends on this block.