Many offensive systems package the wide zone run concept as part of its offensive play menu. Many of these same offenses are teaching horizontal zone combination blocks on the front side of the play to create space for entry points for the running back. While zone combinations could be a viable way to block the scheme, we’ve found other coaches are finding that “track” blocking the scheme can be a better solution, particularly for inexperienced offensive linemen in a tempo offense.

We heard Coach Coverdale speak about how track blocking the wide zone concept has fostered his tempo offense and made it easier on younger linemen to block the play. So, we reached out to Coach Coverdale to talk about his most efficient run concept. It’s been the foundation in the Trinity offensive system, but this season its merits were tested. Working through continually attrition on the offensive line, Trinity had to still find ways to run the scheme. Because of this inexperience, Coach Coverdale and his offensive staff (head coach Bob Beatty and offensive line coach Cliff Dawson) leaned more on track blocking the wide zone concept, rather than using combination blocks.

Though he will teach both tracking and combination blocking, according to Coach Coverdale, there are three main reasons why track blocking can be more effective:

It is possible to teach both combination blocking and track blocking and it’s beneficial to carry both in an offensive play menu. “Why do we need both ways of blocking the wide zone?,” he asked. “We have to use the strengths and weakness of both types. Sometimes we start with tracking and use the combination blocking later. Often times we do it just the opposite. It depends on the players we have and the situation.”

If our linemen were more thumpers we would lean to more combination schemes because it’s more physical, but it’s harder to teach,” he told us. “The combination blocking takes more time. If you have years where you have more continuity the combination block methodology may work better but if you have years where there are young players or you go through injuries, tracking is easier to learn. It’s about running off the ball and take your chances.” Other factors, such as defensive structure are factored into the decision making process. “If there are linebackers in leveraged positioned or stacked behind the ends in three down, we would want to track it because we couldn’t combination to them,” he told us. “If they were in traditional techniques like 20 techniques, we would combo it.

One of the major advantages of the tracking system is that it correlates with tempo offenses. Since there is little to no pre-snap communication like identification of Mike points for combination blocks, it’s really about getting off the ball and going. While Trinity High School is a tempo team, it has paired the wide zone scheme with a sugar huddle formation, similar to what is being used at Auburn (Diagram 1). “We need to have a lot of weapons against players with great get off and the sugar huddle is one of those mechanisms,” he told us. “We will huddle within two yards of the ball. We are not afraid of people hearing us. We want our linemen to just be able to turn around, snap the ball and go. It helps us to go fast. We’re going to shift, present four man surfaces and it creates urgency. The tracking allows us to still play fast in the middle of uncertainty and chaos. We love chaos and we get used to functioning that way.” 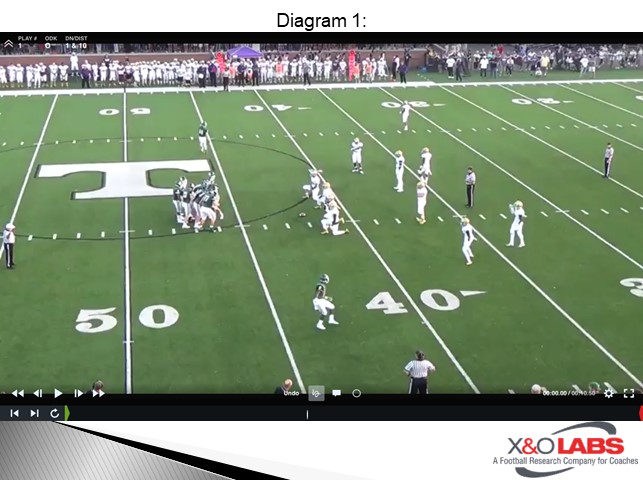 Trinity will have two or three different kinds of the sugar huddle. It may release the receivers first or release everyone all at once. “If we want to be more disruptive to the core (defensive box), we will have a sugar huddle for at least the outside receivers first and then we break so there is no response time in the core,” said Coach Coverdale. In these cases, he wants to snap it within two seconds of breaking the huddle. “If we want to be more disruptive to the secondary or the defenses support mechanisms then we will release everybody all at once so they don’t get as long a look at the overall formation,” he said. While the timing may be slower on this one, the issue is getting receivers on or set and the quarterback doesn’t snap it before they are set. “Kids will lose their edge over time if you over do it,” he said. “You have to enforce it in practice.”