Targeting the C-Gap Outside Zone

The Iowa slant play is built around purpose: get to man block scenarios. They believe that their front seven will beat your front seven. "We firmly believe that in all 7 spots we will kick your ass,” Coach Ferentz told me. “And we train that way year-round.” The vision of the play is enveloped in the mindset of “owning” blocks at the line of scrimmage. And this is done by getting into man-blocking scenarios. For instance, the tight end owning the 9-technique, the Tackle owning the 5-technique, the Guard owning the play side backer, etc. “We want to get to a one-on-one as fast as possible,” he believes.

How Iowa’s offensive staff attains and wins one on ones at the line of scrimmage is the focus of this report. The premise is to be aggressive in many blocking scenarios but be able to attain help if needed in zone combinations. He calls it “targeting,” which is different than traditional zone blocking. The target is the outside armpit in a wide reach technique which essentially is an over-reach and explained later in the report.  “We never want to chase anything in this concept,” he said. “The ball needs to hit wider.” This is created by a wide C gap track of the back. Iowa’s outside zone is modeled after the Alex Gibbs/Terrell Davis philosophy of getting the defense to run on the front side just to cut on the backside. Coach Ferentz calls it a "force the hole" play and that hole is usually the C gap. "All we want to do is separate pursuit in the C gap," he told me. "We want to end up at that landmark with more speed than bodies that can defend it."

The base rules of the concept are below: 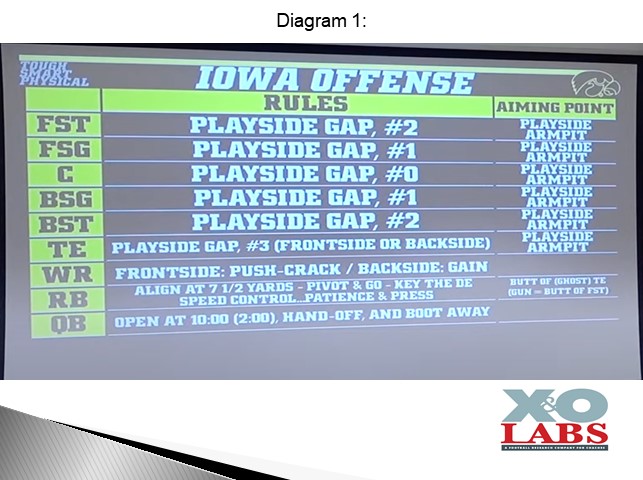 The cornerstone of blocking rules starts with blocking seven for seven across the front in 12 personnel structures, and six on six in 11 personnel structures. Iowa bases out of what Coach Ferentz calls “Zoro," a seven-man combination along the front where the identification is the play side linebacker. The Nose or first down defender is the play side and the rest is counted out. If defenders are stacked, such as in Odd front scenarios, whoever ends up at the 0 area becomes the zero.

The graphics below provide a better illustration of Iowa’s count system based on the front: 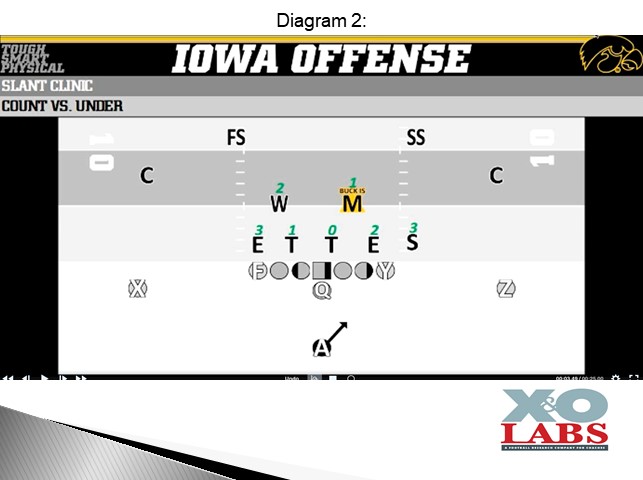 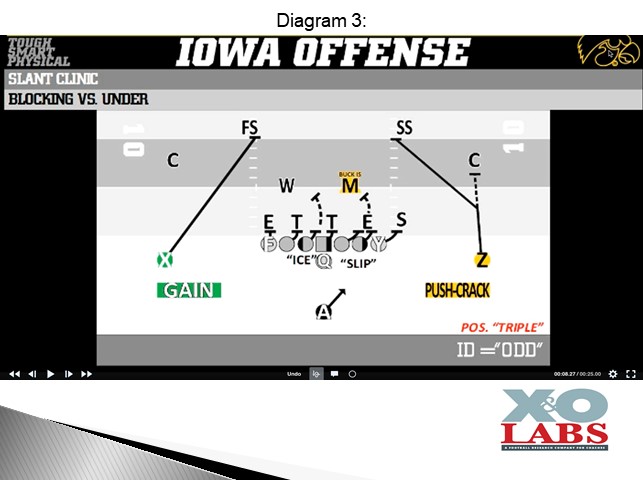 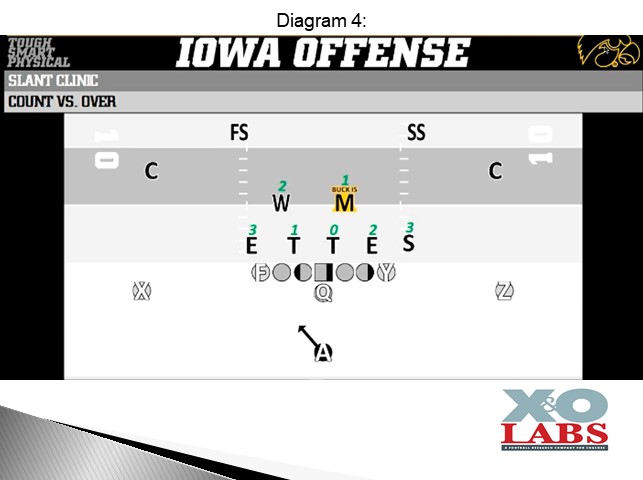 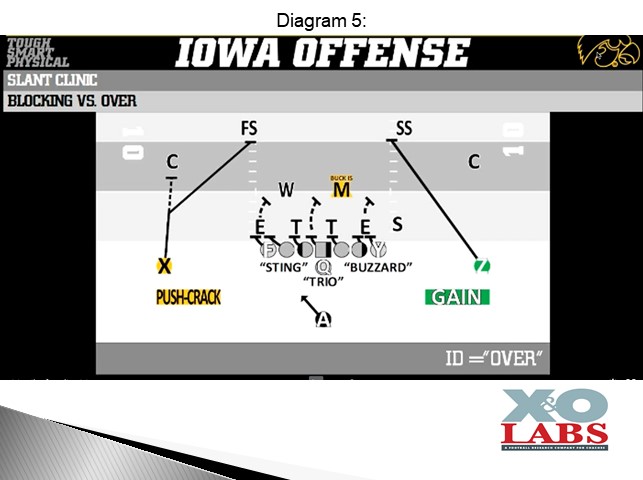 Below are some of the terminology Iowa uses to communicate blocks upfront:

“Slip”- Front side combination with Guard and Tackle 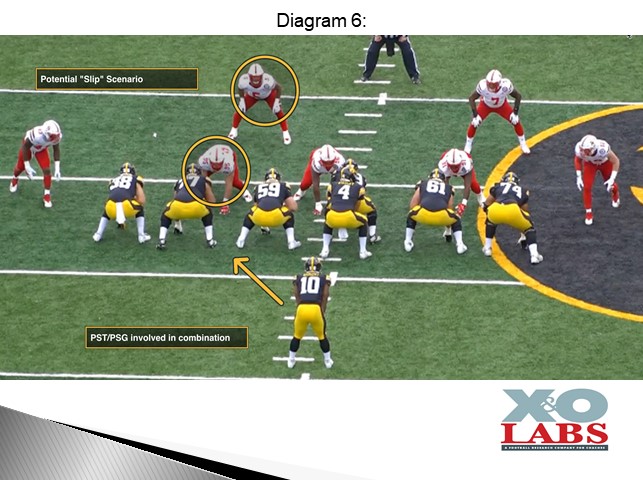 “Sting”- Front side combination with Tight End and play side Tackle. The tight end will reach the play side armpit because he has help. Play side Tackle tries to overtake and push thru to linebacker. 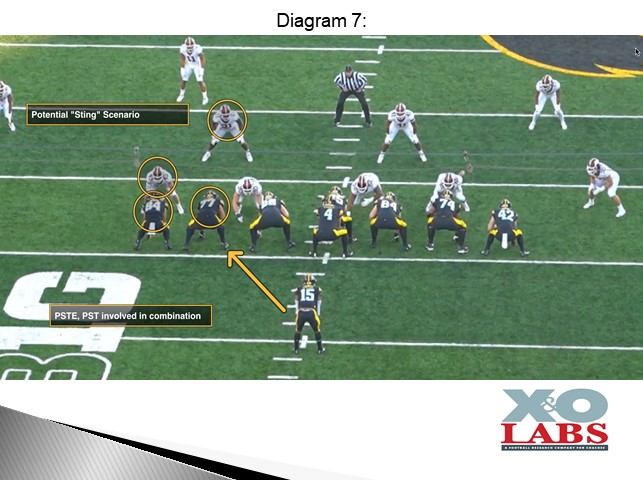 “Triple”- Puts the play side three linemen (TE, PST, PSG) in combination. Good vs. 3-4 defenses with a 4i play side. 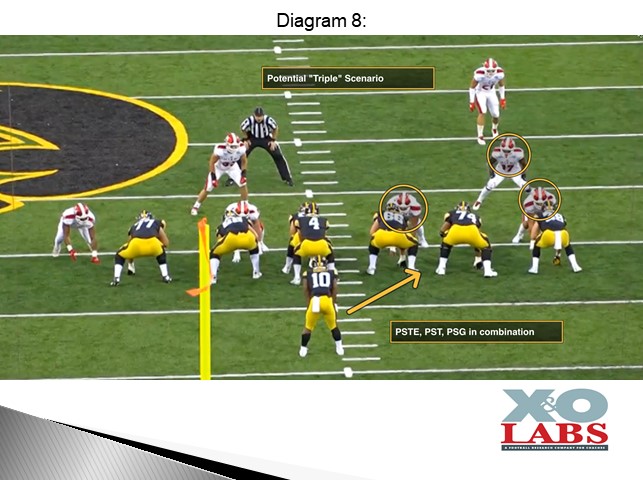 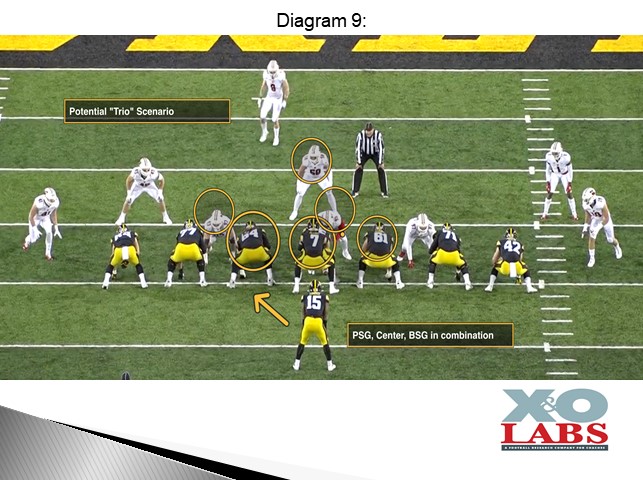 “Homer”- Four-man combination (sting and trio combined). Tells Guard who is covered to check the 7 technique. It’s good vs. Pirate movement along the line of scrimmage. 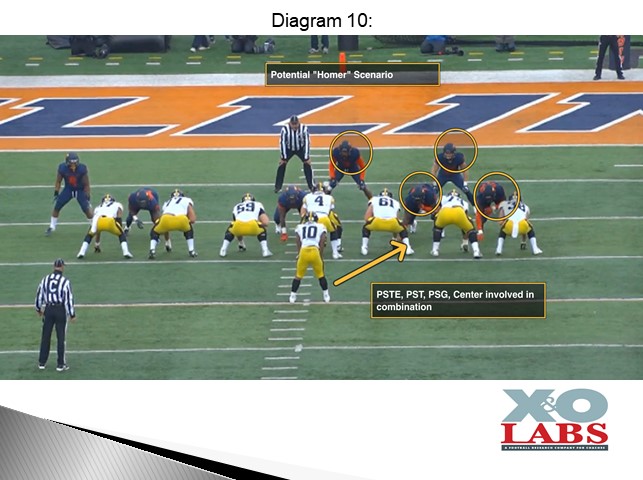 What separates Iowa from other outside zone outfits is the hell-bent nature of getting the ball to insert into the C gap. While the C gap can widen post-snap as evidenced in one of the diagrams below, Coach Ferentz and the offensive staff preaches that all players understand that C gap entry point. It’s all part of the education process of teaching players how the play is run. Quite frankly, every offensive player on the field is cognizant of that C gap entry point. While he says the most important block on the slant play is on the perimeter, he uses the following scenarios positionally to reinforce the timing of the play:

When watching Iowa’s film, it’s clear the Hawkeyes are running the slant play by witnessing the path of the back. Like most operations in the Iowa program, the backs are extremely disciplined in hitting their landmark on the wide zone- which is the play side C gap. Iowa bases out of under alignments, mostly because of the potential of the naked and boot game off outside zone. Coach Ferentz doesn't incorporate many Pistol alignments and he feels the sidecar alignment drifts the aiming point too wide. For Iowa, the C gap is the non-negotiable target for the ball carrier. Coach Ferentz talks about lining a can of spray paint in the C gap to identify the landmark for the back. "That ball should never hit behind that X geographically,” he said. “It may cut behind the Center at some point, but that Center should be at that X before it does. In a perfect world, we get it cut right at that C gap.” Now, that C gap can stretch once the play gets moving, but essentially the ball carrier needs to hit that area with his shoulder square and downhill. "If the back is cut off from the C gap, you have no play," he told me. “We want defenses running.” 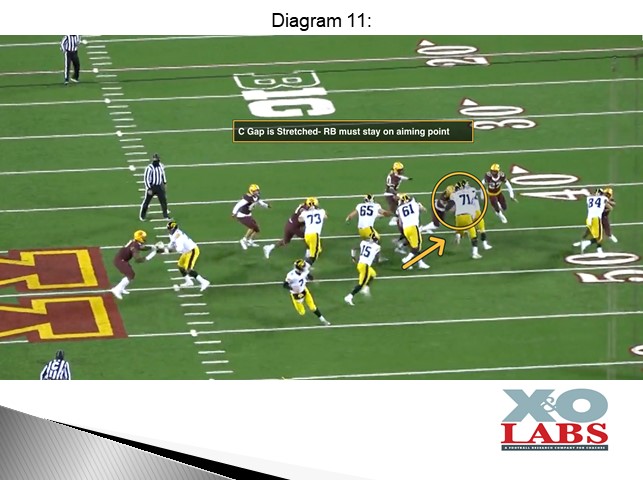 The footwork for the back is to pivot off the play side foot and get downhill at C gap. Coach Ferentz calls it "speed control," which means to press the line of scrimmage, not the hole. The QB is taught to open at 10/2 o'clock and get the ball to the running back behind the C gap. "He's got one job, get the ball to the running back job and boot away from play," he said. "He can't reach the ball out late and he better come off the exchange with the intention that he may have the ball." The running back's aiming point is the tight end to the three-surface side or the ghost tight end to the two-surface side. Again, it's purely a C gap play.

Below is the drill work Iowa uses to teach its QB’s and RB’s the mesh on the wide zone:

The rest of this report focuses on the specific technique of individual and combination blocks play side as well as how the staff at Iowa formations the play to attain soft edges at the C gap.