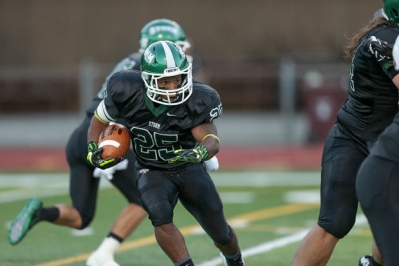 The Storm Speed Sweep is a concept that we have incorporated to attack the flank of the defense. When we designed it we wanted it to be different than the other Speed Sweeps that people see on a weekly basis. We feel our version gets the flank faster, is highly efficient, and forces the defense to adjust on the fly to defend it. The results were a play that was 64% efficient, which means it gained 4 yards, or converted the situation, and averaged 6.7 yards per carry. The Speed Sweep also produced 6 big plays (runs over 20) and 4 touchdowns in 2014.

This concept works wonderfully against the run blitzes that we see. As a heavy Read Zone team, defenses will often call their blitz game to the side of our tailback, or an interior blitz that can give a Zone play problems. Since we have the ability to run our Speed Sweep out of the same formations that we run our Zone, defenses are forced to guess which play we are running or abandon their blitz strategies in fear of getting out flanked.

Another advantage of this concept is that it is very basic from an assignment stand point. We feel that we do not have to practice it a ton to have it ready for game day. This allows us to spend extra time during the week correcting mistakes and gives us extra reps running our weekly game plan plays.

The success of our Speed play begins and ends with the front side tackle. His assignment is to “reach cut” the front side defensive end. He will take a 3 o’clock step or lateral step and cut the outside leg of the end. It is important for the tackle to gain enough ground on his first step to gain leverage and put himself in the best spot possible to execute his assignment.

If the end aligns wide or moves out on the snap of the ball our tackle has two options. First, he can use a technique we call “three steps to the cut” which means he will take his 3 o’clock step at the snap then take two more steps to make up the ground. After his third step he will throw his inside shoulder into the outside thigh of the end and cut him down.

The second option he has is to stay high on the defensive end. If the tackle stays high we want him to work to get his inside hand to the center of the end’s chest and his outside hand on the outside hip. His footwork remains identical to when he goes “three steps to the cut”. If the tackle can establish this position he should have the end reached. If the defensive end makes an inside move, the tackle will let him go and climb to the second level.

It is important to note that in our scheme we never block a first level defender that is in the B gap or tighter. We will also not block an interior blitz. The action of the play will handle inside moves and blitzes. Since we are not worried about anything past the B gap, our front side guard, center, and back side guard are going to take a 3 O’clock step to the play side and climb immediately. They will not block first level defenders. I want them to cut off the first second level defender that they can reach.

We teach our guys to never chase at the second and third level. We give our linemen a “license to miss” when blocking in space. I want them to run full speed at defenders in space. The thought is they will either get their block or the defender will get out of their way. We do not want our linemen trying to juke with defenders. The backside tackle is going to “run to cutoff”. Cutoff for us is seven yards deep on the opposite sideline. I want the tackle to take a sharp angle and block the first second or third level defender he can “cutoff”. A tight end on the back side will perform the same role.