Thanks to X&O Labs for the opportunity to share the basics of our Wildcat package with you. Like many other teams, we often utilize the Wildcat formation in short-yardage and red-zone situations. But we also use Wildcat as a changeup and begin drives in the middle of the field by running multiple plays in succession from our Wildcat formation. We also use it as a major component of our "four-minute offense" when we have a lead and want to chew up the clock at the end of the game.  This has forced us to think creatively about expanding our Wildcat to make the package more varied and less predictable, making it more difficult for opposing teams to prepare for and defend it. This report details our specific Wildcat formation and the fundamental design of our four base plays from Wildcat. The plays and assignments are shown against a five-man front since that is what we often see from our opponents against our Wildcat.

Wildcat for us is what would typically be referred to as a heavy tight set. We utilize one tight end on each side of the formation, two fullbacks/H backs, one slot player and the Wildcat back. The H backs align next to each other on the same side in a three-point stance directly behind the guard and tackle respectively with hand on the ground at 2-2 ½ yards. The slot player aligns to the side opposite of the H backs. The Wildcat’s toes are at a depth of five yards directly behind the center. We can align with perceived strength to the left or right based upon the location of the H backs and slot. Our linemen splits in Wildcat do not change from our normal splits. Diagram 1 below depicts our Wildcat formation with left strength. 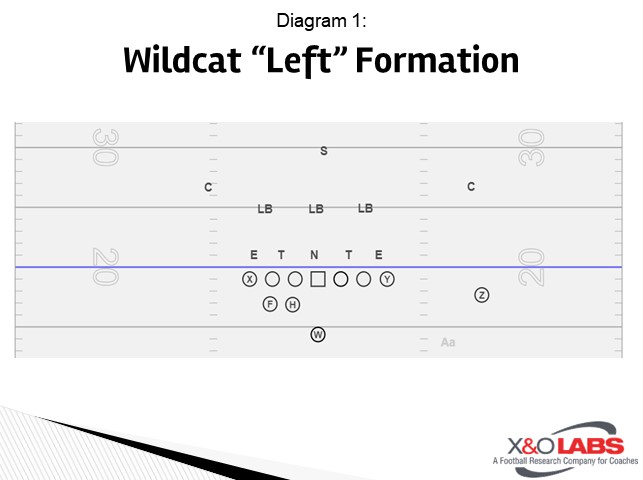 We think of the Wildcat as an extension of our every down offense and one of several personnel packages we use. As such, the terminology we use to call plays while in Wildcat is not special or unique and does not differ from play calls in the spread, I, or any other formation. For example, a basic jet sweep play call would be "blue" or "red" (blue=left, red=right) regardless of formation. This means the basic blocking techniques, rules and assignments for plays also do not alter significantly with Wildcat. We simply now have additional blockers (H backs) with which to work the point of attack.

Basic offensive philosophy includes the ability to threaten the defense vertically and horizontally and make them defend the whole field. Our Wildcat package includes plays to achieve this as well. If the defense stacks the box to stop the Wildcat power inside runs, they then make themselves vulnerable to these horizontal and vertical stretch plays. To help accomplish stretching of the defense we utilize jet motion on almost all our Wildcat plays, forcing the defense to defend the edge. And our pass plays from Wildcat accomplish the purpose of stretching the defense vertically.

Our four base plays from Wildcat are jet sweep, full flow lead, back-flow power, and the pop pass.  While we have additional plays, these are the staple of our Wildcat package and our other Wildcat plays build off these base plays.

As I mentioned we run jet motion on almost every Wildcat play, but not just as a decoy. We typically run the jet sweep at least once every Wildcat offensive series. Diagram 2 below illustrates our basic jet sweep play from Wildcat. 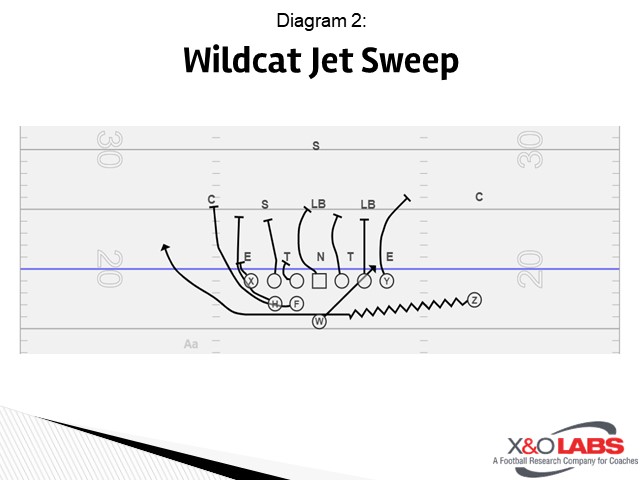