Since learning the under center Jet Sweep at a clinic in 2003, I have been a believer in having some sort of speed sweep in our offense.  The threat of hitting the perimeter at full speed with lead blockers in front, forces defenses to thin themselves out somewhere, either by alignment or as the motion is happening, to get enough defenders in pursuit to the perimeter.  Identifying where the defense is vacating or leaning is key to knowing where to attack next.

Through the mid-2000’s, we evolved from UC-Jet, to UC-Rocket Sweep, to now attacking with Gun Rocket Sweep. We transitioned to gun in the winter of 2009 to be able to involve our QB more in the running game. When we started in the gym with our QB reversing out in gun and making a toss like we would under center, the ball was all over the gym, and we could not get complement runs into the los with efficient timing. I told our QB, a basketball player, to simply front out and make a basketball chest pass. The pitch was crisp, quick, and on target, and now in an instant we had the ability, from a shotgun set, to hit the perimeter very fast with our Rocket Sweep. We were also still  able to get our complement runs: Powers, G-Schemes, Traps, and Counters into the los with efficient timing.

From that day in 2009, we have worked hard to build our offense utilizing complement gap running schemes, conflict-creating blocking schemes, screens, quick passing and play action passing, and just enough option to force teams to play assignment defense. The offense is perfect for coaches looking to utilize their QB in the running game without the heavy investment in the option game. In this article, I will share with you how we execute our Gun Rocket Sweep including blocking assignments and techniques by position. I will also share our blocking variations and some of our manipulators.

Advantages of the Gun Rocket Sweep over the Fly Sweep 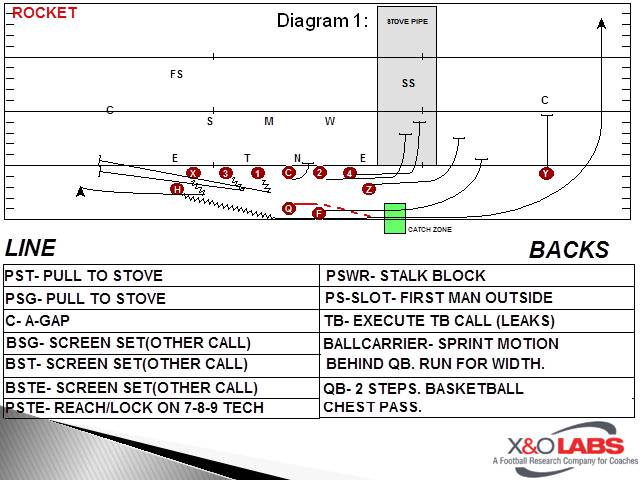 Quarterback - Aligned with heels at 4 yards, the QB secures the snap and opens with the play side foot to the sideline then crosses over with the backside foot. This will position his shoulders completely perpendicular to the line of scrimmage. From here, he simply makes a fundamental basketball chest pass (thumbs down) to the sweeper, hitting him in the hands.