Front Side Blocking Progression in the Outside Zone

First and foremost, I would like to thank Jerry Odom for allowing me to coach the offensive line at Tusculum University and also to thank X&O Labs for allowing me to discuss how we teach the front side blocking of our wide-zone play. When it comes to running the wide zone play at Tusculum, we don’t think about footwork and attacking our defenders. As an offensive line, we walk up to the line of scrimmage and the defense presents a front to us, and as an offensive line, we have a toolbox with an approach, appropriate and techniques steps to handle these fronts.  At Tusculum, we start each practice with our approach and steps.

General Info and Key Points About Outside Zone:

Before hitting the field and introducing drills and fundamentals of outside zone play, there are a couple of key points that must be covered and understood in the meeting room.

Our general zone philosophy is that in our zone schemes, the Offensive Line is responsible for moving the down lineman, and the running back is responsible for moving the linebackers.  The aiming point of the running back on the wide zone is the backside of the play side tight end.  The play can hit from the Front side A gap, B gap, C gap to the backside B.

My base rule is to block my front side zone. and my aiming point as a covered offensive lineman is two inches off the midline.  The offensive linemen should always ask “Where is the Defensive lineman located about the framework of my body? It can be any of the following:

Definition of Front Side Rules: 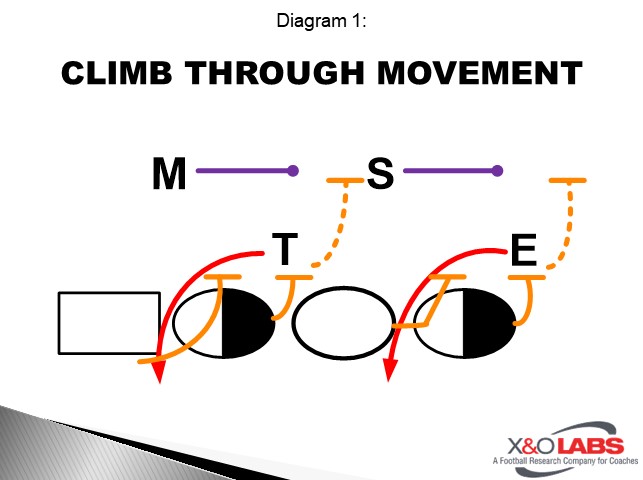 As an offensive lineman, we want to understand how we must be postural when we are run blocking. We want to have our foot on the ground, with our knees inside our ankles and our weight on our insteps, which creates a "big bent knee", we want to have a big chest. We believe that this position allows us to efficiently move forward, backward and laterally and gives us the ability to use our double or single under forklift technique when we make contact while striking on the rise.

Our objective when we take “steps” is to close distance and space between us and the defender and allow ourselves to be square and give the running back a clearly defined read. To arrive in this position, we must understand how to approach each defensive situation and use the appropriate steps. We also will take more steps than big steps to arrive in the proper position

Approach and Steps for Covered Lineman:

Steps: When an offensive lineman takes his steps, his first step is a position step to set his course and path to achieve the goal of being 2” off the midline for the outside zone. On the first step, the backside knee should pivot and continue to be inside of the ankle, the pivoting of the knee indicates that the OL has lowered his center of gravity.