The Ferris State Bulldogs, led by Head Coach Tony Annese, is coming off of a landmark 2018 season.  The Bulldogs fell just two points shy of a Division II National Championship.  Ferris State was paced by an explosive offense averaged just under 500 yards while scoring 39 points per game.  The Bulldog offense featured a rushing attack that averages just over 270 yards per contest (4,354 rushing yards) over the course of a 16 game season. Offensive Line coach Sam Parker oversaw a veteran position group that paved the way for 52 rushing touchdowns.  One of the more explosive components of the Ferris State rushing attack was their Jet Sweep package.

Ferris State believes in using motion as a big part of their offense.  Coach Parker acknowledges that his Head Coach (Anesse) has a background in the flexbone offense.  The flexbone, like so many other offenses, relies heavily on the use of motion to gain a man advantage or gain a flank, on the defense.  Over the years Coach Anesse brought many of the flexbone principles with him as he transitioned first to the pistol and then to a 10P spread team that often bases out of 2x2 formations.  During their run to the National Championship game in 2018, the Ferris State offense employed a myriad of personnel groupings and formations to attack defenses.  This is evident in their Jet Sweep package.

Coach Parker goes in-depth on the Ferris State game-planning process and explained to X & O Labs what the staff looks for when building the Jet Sweep package into a game plan. 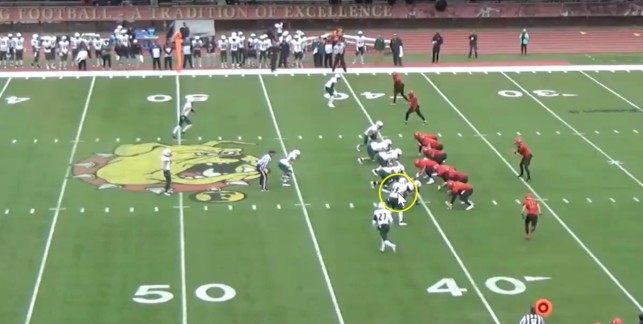 Like many spread teams, Ferris State wants to use its tempo to stress the defense.  Additionally, Coach Parker and the rest of the Bulldog offensive staff want to force the defense to defend the entire field.  The Jet Sweep package is one way to accomplish both of these things.  Coach Parker also acknowledged other key factors that make Jet Sweep an important piece of their explosive offense:

Another element to consider when setting your game plan is how you intend to block the Jet Sweep.  Many teams borrow their blocking scheme from the traditional Flex Bone Rocket Toss where the offensive line will work towards the Sweep action.  Other spread teams have the offensive line work away from the Sweep action.  Coach Parker acknowledges that either way, "You are not blocking one end.  Pick which, front-side or backside and block freaks,” he said.  The reaction of the play-side end can determine which action that Ferris State chooses to employ.  A defensive end that is going to work hard up-field after the snap is better handled if you block him.  If he continues to work hard up-field and disrupt the play, then Coach Parker reminds you "call another play."  That reaction, as well as fast flow from linebackers, is what makes the Sweep package so vital.  An aggressive up-field defensive end is likely ripe to have power or power Read run right at him.  If the offense is having success running the Jet package and the defensive end starts to get upfield, then the natural constraint play from the offense would be to show the same action and run power underneath the defensive end as he flies upfield.  The Ferris State offense also uses power read as a complement to their Jet package.  If the defensive end wants to get upfield to disrupt the Jet, the offense can take advantage of his aggressive play and read him.  On the flip side of that, if the play-side defensive end wants to squeeze down blocks hard, the offense can often find success by zoning away and outrunning the end.

For teams that choose to zone towards the Sweep action, it is important that you capture the edge with your blocks.  One point of emphasis for Coach Parker and his offensive line has been a move away from “traditional” terminology.  Experience offensive line coaches know that unless Outside Zone is your primary run scheme, and thus the primary focus of your practice, that asking a player to “reach” a defender often results in the lineman over-running the defender.  Coach Parker has moved away from asking his players to “reach” anyone.  Instead, Coach Parker tells his offensive lineman that “this is a drive block, and then turn your hips.”  The same players that struggled to reach a defender found more success.  “If you can win play-side,” he says, “turn your hips.”