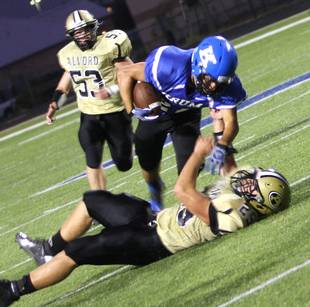 Our offense is a multiple formation offense. We like to use a variety of looks to help us get in the best situation to run our base plays. The Rocket Sweep is a big part of our attack as we believe it gives us many advantages. With that said, we have also learned that you have to commit to running the play to get the advantages of the motion.

Once the Rocket is a staple of your offense, the defense will run specific schemes to disrupt your game plan on the edge. The purpose of this clinic report is to explain the common defensive schemes to attack the Rocket Sweep and the solutions we use to attack those schemes.

Advantages of the Rocket Sweep

Krum started its football program in 2008 with 7th and 8th grade teams and then built to a successful varsity program in the years since. In the beginning, we were a big Jet Sweep team. As the scheduling became tougher each year, the explosiveness of the Jet Sweep began to diminish. After watching Georgia Tech play, we decided to take their Rocket Toss concept and put it into the gun. We installed it in the Spring of that year and it became one of our base plays ever since.

Our number one reason for running the Rocket is that it gets our fastest athlete the ball in the perimeter. With the pitch being received outside the tackle box, the tackles block doesn’t have to be a perfect hook to have a successful play. With the success of this play, we were able to utilize the motion to open up every aspect of our offense. The influence it puts on defense will help the run game, passing game, and screen game.

The Rocket Sweep is nothing but a receiver toss play. The slot receive will “orbit motion” and the quarterback will reverse out and pitch it to the moving receiver. The receiver now becomes a running back, and now, one of your best athletes is carrying the football. 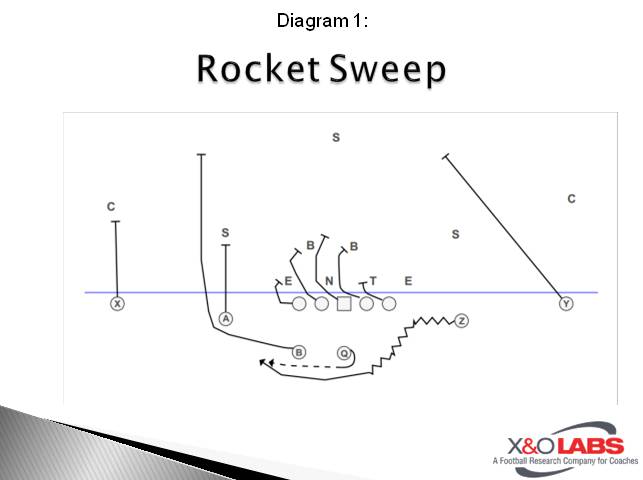 The most important thing is to make sure your quarterback and wide receiver are on the same page with timing. We have a Rocket period that is 5 minutes every day in practice where we devote to getting the timing down. Here are a couple of key points for the wide receiver and quarterback.

Start with a flat motion toward the quarterback.

When you are about 3-5 yards outside of the tackle (depending on the speed of the receiver) orbit 1 yard behind the quarterback.

After you pass the quarterback, flatten out the motion and be ready for the pitch.

Set the receiver in motion.

When the wide receiver disappears from your peripheral vision, snap the football.

Open your foot about 60 degrees and pitch the football to the receiver.

Our basic blocking scheme for the Rocket Sweep is an Outside Zone concept. The difference is being that do not worry about combos. The simple rules are as follows:

Play Side Tackle: Bucket step and hook the end man on the line of scrimmage.