The final insert concept of this special report is the wham concept, which is essentially a trap block on the -1 defender on the backside of the zone (Diagram 38). Although 46 percent of the coaches surveyed say they run this concept, we found it to be the most under utilized concept among this focus group. In fact, while conducting our research, it was a common declaration for many of our contributors to say, “we wish we ran it more.” Because when run correctly, the play can be dynamic. 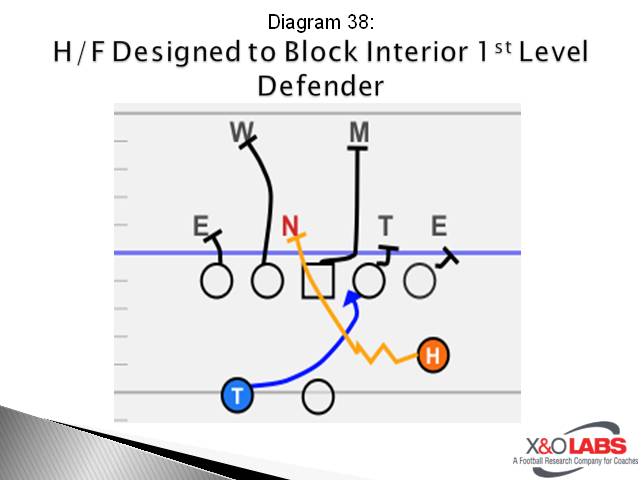 While it can be dynamic, there is that ever-present concern that an H back cannot effectively block a first level interior defensive lineman, which is what the job description entails. Sure, a tight end on a defensive end on split zone can be managed, but a face first block on a 3-technique or what’s worse, nose? You can’t be serious. Well, our contributors are not only serious but they’re adamant about running the wham to both an odd and even front.

In this case, we’ll share our finding on how coaches are identifying whom their target is, because the beauty of the scheme is manipulating whom you want to trap. We also present our research on how they are blocking the concept and how the H is taught to execute his assignment. It’s a zone concept play, so the aiming points of the back will be of the same emphasis we detailed in case one. When we asked our contributors why they packaged the wham with their inside zone concepts, here is what they told us:

Tyler Bowen, offensive coordinator, Fordham University (NY): “If you’re running zone, the toughest block on the field is the backside tackle on that 4i defender so the zone wham is an answer. We have a better angle to wham him than cut him off.”

Tom Clark, offensive coordinator, North Cobb High School (GA): “The best part is it doesn’t change anything for our offensive line zone principles and it allows me to block six or seven in the box. We don't have to worry about brining an extra lineman in to block seven in the box.”

Since many coaches package the zone wham with other insert concepts such as divide zone or cut iso, we wanted to research how they were coding the play, or labeling the play. Responses are posted anonymously below:

“This is a ‘wham’ tag for us. The H/F/Y is responsible for the first down defender past the center.”

“By how we align our back, or the formation, and where that sets everyone, the wham call will always apply to an A gap threat on the backside of the call.”

“The first man past the nose of the center is not blocked. Backside tackle has defender on line of scrimmage. Backside guard has best path to linebacker.”

“We tag ‘wham’ or ‘nose wham’ to our zone call. Wham is a front side wham and Nose Wham is a backside wham. These are interior defensive line tags. Linemen know to fan/rip-under the side of the wham. Combos remain the same as zone unless your combo defensive lineman is getting the wham block.”

“We actually have a play call for this play. This is 40/41 for us. Which is inside zone front side, fan backside and the H lines up base on the call. Against an even front will always wham the nose or shade technique. Against an odd front, we have whammed the nose, or a defensive end.”

“We will only wham a 3-technique. We'll give a Tom, Tommy, or Thomas call along with our zone call to indicate to the OL that front side is blocking inside zone and backside guard and backside tackle have linebacker and defensive end. The ‘Tom’ call tells backside not to block the DT backside.”

We found the majority of coaches will prefer to run the wham concept against a 3-techinque mainly because of the aggressive nature of that player and a higher tendency of an up field charge, both of which complements the purpose of utilizing the wham scheme.

Scott Wooster, the offensive line coach at Wayne State University prefers to run the wham concept at the 3-technique in four down fronts mainly because of those aforementioned reasons. Often times he will do it with H motion in order to get him on the outside leg of the guard to get the right leverage on the block (Diagram 39). 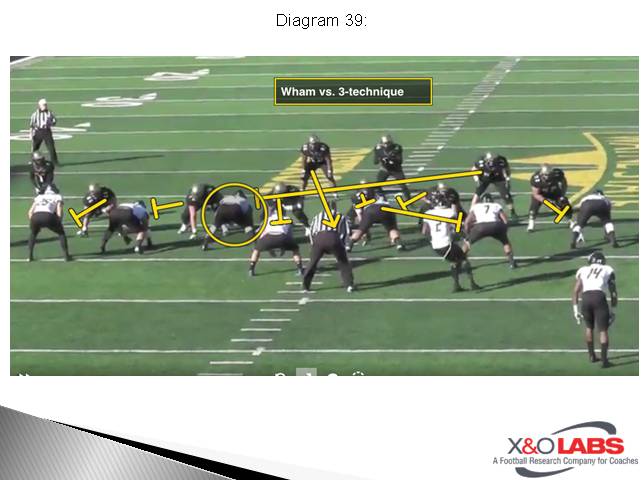