The cut iso or zone iso, as it may be called, is an insert concept that will influence the backside inside linebacker or -2 the point in zone schemes (Diagram 30). It can be run to the side of the H or away from the H who will lead block on a second level defender. It mirrors the old school isolation scheme save for one main reason: it entails zone blocking to the play side and man blocking to the backside of the concept. This means that it still relies on the displacement of defenders who are working to the zone concept and because of this it provides for a “softer” blow by the H/Y on the second level defender. We are calling it “cut” iso because the H is usually “cutting” across the formation to block the second level defender. 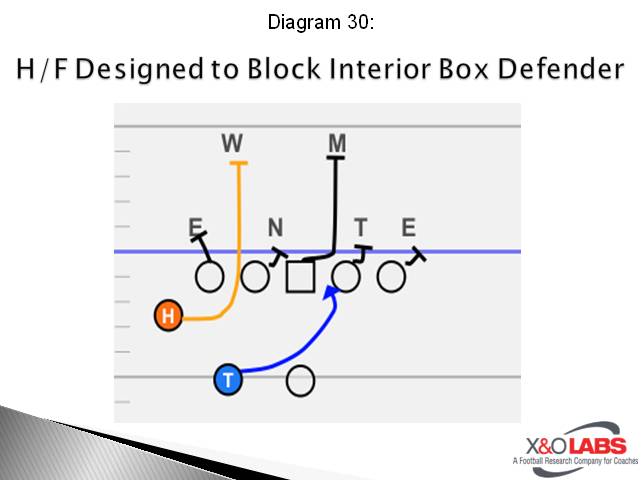 In this case, we will conduct our finding on how coaches are identifying the defensive front, how they are blocking the concept and how the H is taught to execute his assignment. It’s a zone concept play, so the aiming points of the back will be of the same emphasis we detailed in case one. When we asked our contributors why they packaged the cut iso, here is what they told us:

Chris Fisk, offensive line coach, Central Washington University: “Whenever that back side tackle has free access into the B gap that DE can close the hip so bad, we lose H backs to concussions. The collision is so much more doable for him (an H) to insert into a second level.”

Tyler Bowen, offensive coordinator, Fordham University (NY): “If a team is doing a great job of bend scraping on the backside of the zone, this can give you the ability to set a point on the bend defensive end and put the TE/H back on a soft scrape defender.”

Larry Hill, Smithson Valley High School (TX): “We think it marries up with the three down fronts and four down fronts equally.”

Since many coaches package the cut iso with other insert concepts such as divide zone or zone wham, we wanted to research how they were coding the play, or labeling the play. Responses are posted anonymously below:

“We use the tag, ‘BOB’ to let the H/Y/F know that they are responsible for inserting on the backside LB.”

“We tag the backside tackle with a ‘Seal’ tag when he has a FB/wing play next to him. In conjunction with labeling a Mike (whom the center will climb to all things equal/proceeding normally), the Seal tag tells the backside tackle he is hinging back. If we want to have both the tackle and guard hinge back, a Bob call is made which directs the FB/wing to insert through them to go second level, again, keeping in mind who our designated Mike will be.”

“The back side tackle has man on. Rest of the offensive line follow inside zone rules. If the back side guard has a 3-tech, H leads up through backside A gap for the Will (linebacker).”

“We tag our zone call with ‘BOB’ (Big on Big). When the linemen hear the ‘BOB’ tag, they know they are responsible for the 4 down linemen plus the "Mike" (3 down linemen and OLB if an ODD look). The QB sets the ‘Mike’ call at the LOS and we base our combos on that call.”

“We tag our blocking call with a ‘T’ to tell the BST (and sometimes the BSG) they are base blocking, not zone blocking.”

“For us, we call this ‘wham’ which is nothing more that inside zone on the play side and iso rules on back side. Our play side offensive tackle just knows he has to drive block the defensive end.”

“To our linemen, this is ‘Boston’ which to them is our code word for locking on the defensive end. This also tells our H-back to block B-gap backer whether play side or backside.”

“We would call this ‘zipper’ insert. We signal the concept to the offensive line, so we would signal in zipper lock, telling the left tackle that he's locked on the end.”

“We use a ‘B’ word to tell the line that the Y has linebacker level (first linebacker outside center away from the call). Basically becomes an iso.” 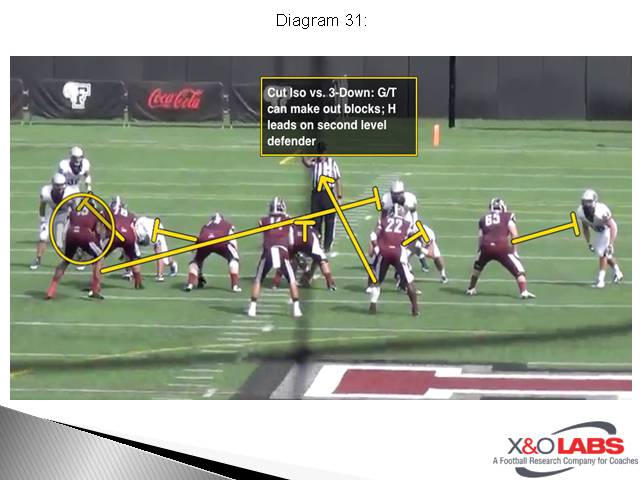 The cut iso is a six-box run concept, particularly out of 11 personnel Y off groupings, which 65 percent of coaches say is their most productive Y off personnel grouping. The advantage of running the cut iso against three man front six boxes is the ability to out block on both the 3 or 4i-technique defensive tackle and Jack linebacker, while inserting into a second level player. Which means that there is one underlying question to using this concept against odd fronts, can your center handle the nose? If he can, great. If not, this may not be a good concept against odd.