What separates using open formation zone concepts from H/Y off zone concepts is the addition of another gap offensively which converts to the ability to block at least six defenders. And when you add the quarterback run into the equation (which we won’t for the intent of this study), it has the ability to block seven. For all intents and purposes, the zone read component of the H/Y off run game, or commonly referred to as slip, will be left out of this report…but it’s a nasty complement to these schemes. That concept was focused on in our special report on the Pistol Formation.

This case is going to strictly focus on the divide zone (Diagram 18), which many coaches are calling the best-run concept in football for a variety of reasons. Most of which are included directly from our contributor’s testimonials on it below: 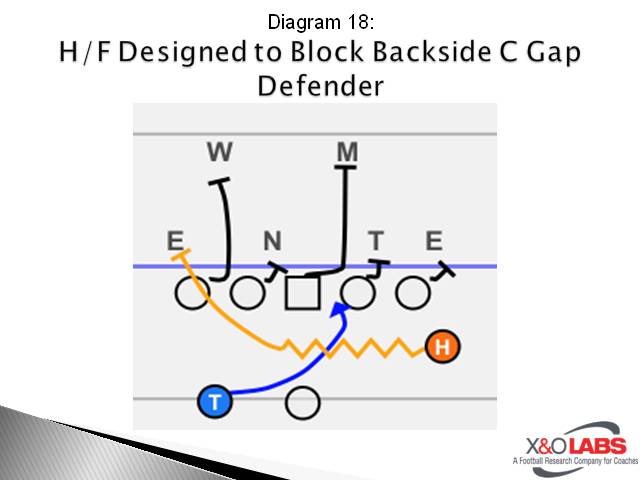 Tyler Bowen, offensive coordinator, Fordham University (NY): “You can take advantage of teams that back gap, but are late to fill the front side B/C gap area. Also against teams that back gap and fill with a 3rd level player, it can allow you to take advantage of that player with RPO tags. From a basic standpoint, split zone gives you the ability to run a split end surface run, to your tight end strength (H Back) by creating a three-man surface.”

Tom Clark, North Cobb High School (GA): “We love it out of two back formations. I like it because we run so much gap scheme out of two back, teams start over playing one side and it helps with misdirection. It gives defenses the wrong read and keeps them honest. Also helps against odd fronts that don’t know where to slant. We can cover up all the gaps and be gap sound with this scheme.”

Justin Iske, offensive line coach, Southwest Oklahoma State University: “The more a team slants/twists, the more we will work our base zone and split zone.”

Mike Rowe, Rocori High School (MN): “We want to be able to run the ball because living in the Midwest the weather will not always be perfect. Even with all the RPO adjustments, we still find defenses will load the box on crucial run downs. By using split, iso, and wham, we are able to still gain positive yards versus these run boxes.”

Chris Fisk, offensive line coach, Central Washington University: “The entire zone game is how you control the back side C gap or D gap. You don’t want defensive linemen crashing down line of scrimmage making plays for a one or two-yard gain. Split zone controls the backside C gap effectively.”

Before we get into how teams are running these concepts against box counts, we wanted to present our research on how offensive coordinators are tagging these concepts to alert the skill players. One of the more prominent advantages to tagging these insert zone schemes is the ability to not change anything up front for the linemen. We’ve found that the path of the back doesn't change as well. So, the onus is on the H/Y to know who he blocks based on the insert being used.

Below are anonymous responses coaches have submitted from our survey on how they “tag” the divide zone concept.

“We used two calls for this a year ago. ‘Scrape’ would indicate that the fullback or tight end/wing would insert himself to the backside of the run, kicking out the end man on the line of scrimmage (EMLOS).”

“We would call this ‘10 Kick’ (Mule for no huddle ID). The 10 tells the linemen to block inside zone to the right and the kick tells the H he is to kick out/cut off the first man outside of the midline of the back side tackle. In situations where a head up defensive end spikes inside, the back side tackle would pick him up and attempt to cut him off or ride him down the line of scrimmage leaving a bigger cutback lane and the H would lead up to the Will or first back side inside linebacker.”

“We actually make this a different scheme / code word in our system to communicate to our offensive line when we run at an A gap defender that we want the backside to cut-off.”

“It’s built into the play. That is how we teach it. The H block is called ‘Hack’.

“We simply add the word ‘kick’ to our play call. The offensive line rules do not change. We run inside zone to the right, leaving the C gap defender untouched (zone read). When we want to run cutoff/divide concept, we just call ‘zone right–kick’ and the H back or Sniffer knows he is kicking the C gap defender.”

“We tag this as a ‘BAMA’ call. This tells our back to go to the A gap and our H-Back to kick-out the defensive end. For our linemen, we keep it simple and stick to our ‘zone read’ rules. This allows multiple plays and looks out of different formations.”

“The (zone) read and cut-off is same call. Only the player responsible for that block knows from a signal.”