This report may be a zone study, but it’s essentially an advancement on running the inside zone concept. We specifically researched programs who were “hanging its hat,” as coaches say, on the inside zone concept. Specifically, we wanted to contact coaches who were finding ways to run the inside zone when they had to run the ball, which often came at the expense of seeing loaded defensive boxes.  Of course, one of their answers was to use an insert a blocker such as a fullback or H/Y off the ball. But before we address the three run concepts in this study (Divide Zone, Cut Iso and Wham Zone), we wanted to provide the framework of how coaches teach their offensive linemen who to block. We didn’t want this to be a technical report on how to block the inside zone play. Much of that has been studied and reported in the past.

In this case, we present our research on how coaches have tweaked their zone identification to account for loaded boxes pre-snap and defensive “back gapping” post-snap. We also researched how these new box counts were correlating to the path and reads of the ball carrier. Finally, we wanted to provide a skeleton outline of how coaches were training their H back in practice to prepare him to make the necessary blocks to make these schemes productive.

In most programs’ zone schemes, the quarterback or center is expected to make the front identification by identifying the play side inside linebacker (Mike) and the line will work their zone combinations to that defender. The “point” is where the center is working his combination block. In most cases, that player will be the play side (or center side) A gap defender. The count (front side and back side) occurs from there. The guard is responsible for number one (on or off the line of scrimmage), while the tackle is responsible for number two (on or off the line of scrimmage). Consider the following diagram where all defenders are accounted for on the line of scrimmage. 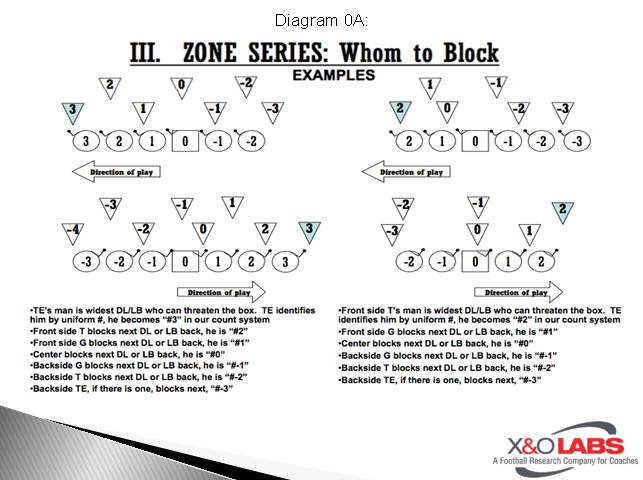 When second level defenders are tied into the count, they can still be given numbers. Consider the following diagram: 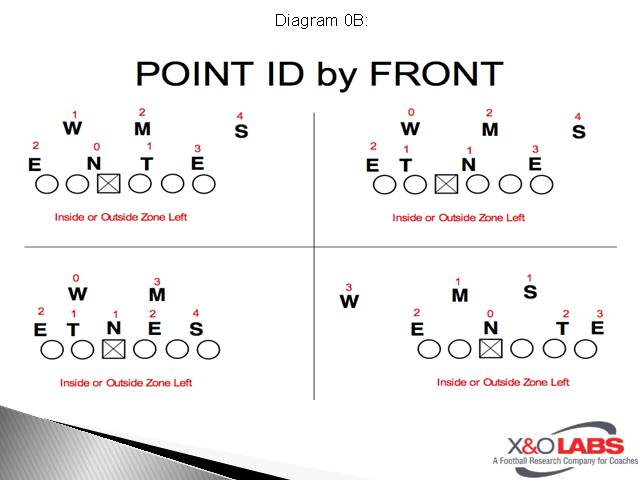 This common point system can be implemented against most base defensive fronts. 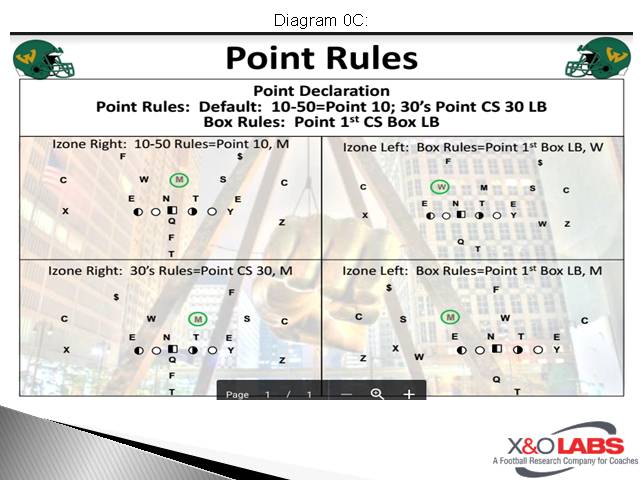 There are some coaches, like Brad Davis at the University of Florida, who chooses not to run inside zone against three-down, movement based structures. “The angles are bad, particularly against two-gap defenders,” he told us. “It’s easier against four down because you can control who the quarterback reads. There is not as much fold action with the defensive end and outside linebacker.”

So when we first started conducting our research, we were curious to see how many coaches were confident in running inside zone schemes against odd fronts. We had to believe that for coaches that hang their hat on the inside zone scheme, they will make adjustments to “do what they do.” Turns out there were some concern about zoning the odd front: particularly the presence of two 4i techniques (otherwise known as the Tuff front) and the potential of movement post-snap. With movement gaps change so it’s vital to get the number count right pre-snap.

We will present our research on how coaches are addressing both 4i alignments and movement, but before we do, we’ll address how they are identifying stagnant box structures.

The consensus is to “own the stacks” with the Mike LB being the Mike point. 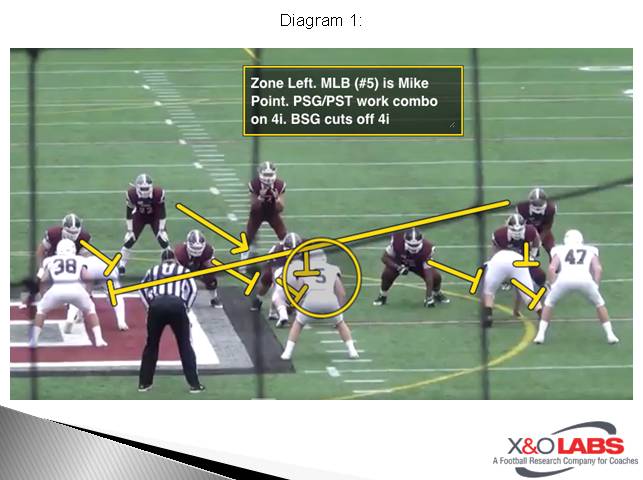 Here, the thought process is to push the count to the overhang rush (or Jack linebacker). Tyler Bowen, the offensive line coach at Fordham said, “we will never account for a defender outside the framework of the original six that we declare pre-snap. We will handle all other defenders with a RPO tag or feel comfortable about our matchup with the RB on their unblocked player.”