Targets and Tracks in Inside Zone Blocking

The offensive line is arguably the most nuanced position in football.  Offensive linemen must react to a wide variety of situations and have tools to make proper adjustments pre and post-snap.  The pre-snap procedure tells the linemen "who" they are going to block, and the post-snap procedure tells the linemen "how" to block.   In this report, we are going to explore the post-snap procedure in the Zone Blocking scheme and explain how specific aiming points on a defender (target), the path to arrive at the block (track), and footwork to support makes the play successful.

We use the Covered/Uncovered rules for Zone Blocking in our program.  The communication of those in our pre-snap procedure sets up the identification of whom we will block which determines our target and track.   We define our target as the aiming point we want to block on the down lineman.  This is dependent upon being covered or uncovered.

Uncovered – Near number of next down lineman play side

Covered with Combo Call – Far number of down linemen covering

Covered with no help – Breastbone of down lineman covering

The first step in finding a target is locking in with the eyes.   Our philosophy is “aim small, miss small.”  From the time we take our first step, we lock on the target with our eyes.  On the second step, we strike the target with our hands.  If the offensive lineman is comboing to a linebacker, he is splitting the down defensive lineman in half.   The uncovered lineman will strike underneath the shoulder pad right at the pectoral muscle with his backside hand and at the breastbone with this play side hand.  The covered lineman will strike under the shoulder pad at the breastbone with his backside hand and at the pectoral muscle with his playside hand.   The strike of the target will lead to the path (track) the offensive line will take.

If the offensive lineman has no help, he has the responsibility of blocking the defensive lineman one on one.  His eyes go the middle of the chest in order to size the frame of the shoulder pads directly underneath the pectoral muscle.   The eyes will always lead the hands and feet.

On Inside Zone, our track is going to be as vertical as possible.   We want to create vertical displacement of the defense.   In scenarios where teams are blitzing five or more defenders, lateral displacement is acceptable.  We ultimately need to account for everyone; however, we want to move the line of scrimmage down the field.

Our first step is a 6-inch lateral step to the playside, towards our target. 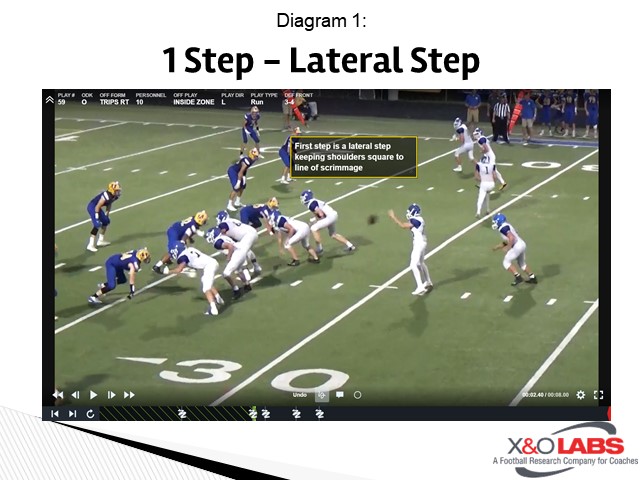 We want our shoulders square to the line so we can react to a defensive movement or blitz.  Our second step will aim through the crotch of the defensive lineman we are comboing. 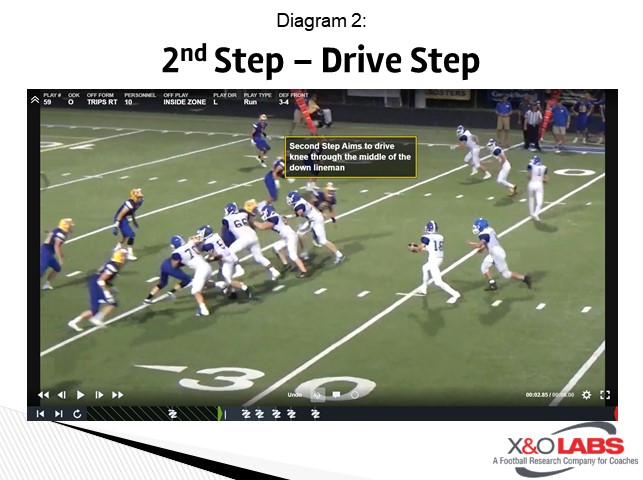 This step sets our track.  From there, both linemen will be working in a co-operative mentality trying to block their assigned defensive lineman and linebacker. They will stay on the path that their second step takes them down the field.

Their track is as wide as the frame of their body and starts at their assigned gap moving to the playside.  Once on their track, they are like trains.  They will not leave this track and will destroy whatever crosses their path.

If a lineman isn’t involved in a combo, he is Big on Big (B.O.B).  His job is taking a jab step with his inside foot and block his assignment outside.  He has a target, but not an assigned track.  His only assignment is to keep his defender from crossing his face while using proper technique.