Heavy run boxes are commonplace when defending the University of Wisconsin-Whitewater. It’s no surprise considering the Warhawks have been 39-4 the last three seasons, averaging over 200 yards a game on the ground. And as the offensive coordinator since 2020, Pete Jennings had to choose to integrate the QB run game just to add a hat back. Naturally, it came in the form of zone read, a Day 1 install that the entire run game stems off of. All levels of the defense can be read depending on the skill set of the QB. This past season read zone averaged 4.92 yards per carry and was efficient 60.2% of the time it was called. His metric for efficiency is as follows: 1st down, 4 plus yards. 2nd down, split the remaining yardage in half. 3rd down, get the first down. 4th down, get the first down.

But while the responsibility of running the play efficiently lies on the quarterback, the challenge of running the play effectively is entirely placed on the backside Tackle who has to correctly identify the placement of the read defender and the technique needed to block him. Wisconsin-Whitewater can read first and second-level defenders based on the ability under Center. "If you have an elite running QB, you need to put that defensive end in conflict," Coach Jennings told me. "But you put a lot of stress on those Tackles to be smart and athletic to understand how to release off that 4i. If you can teach those to your Tackles you can have a huge advantage in your run game.” 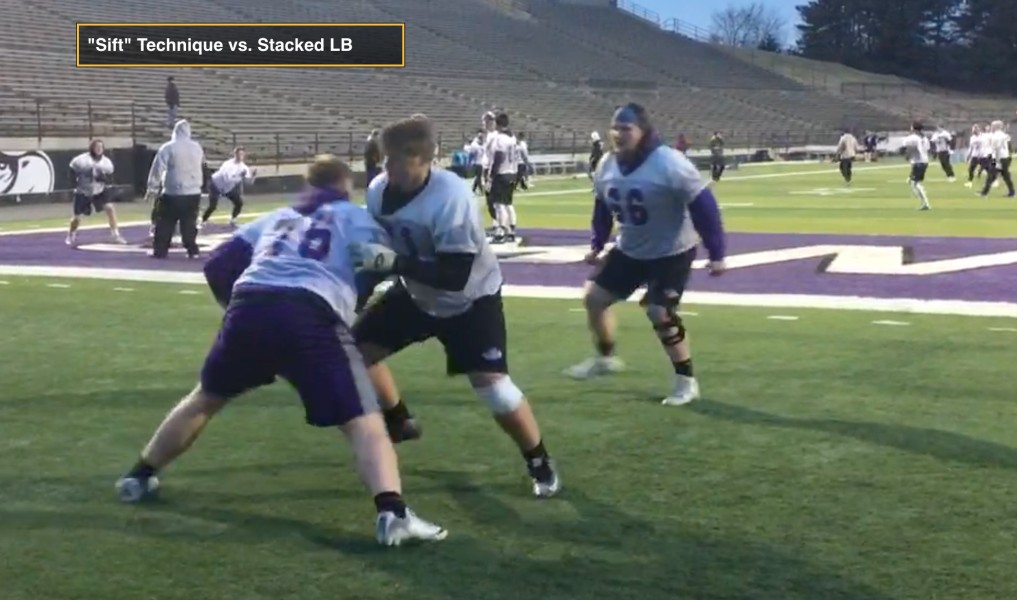 Like the two other programs we profiled recently- Monmouth University and Rice University- the Warhawks teach tight zone as a man concept. The Mike is identified as the point and all combinations work to him. For many of their schemes- both run and pass- they ID the defensive front and the Mike, inside zone is no exception. We can push or pull the point depending on the defensive scheme and or game plan, for the ease of explaining in this article we will say the Mike or “Point” is the middle front LB. 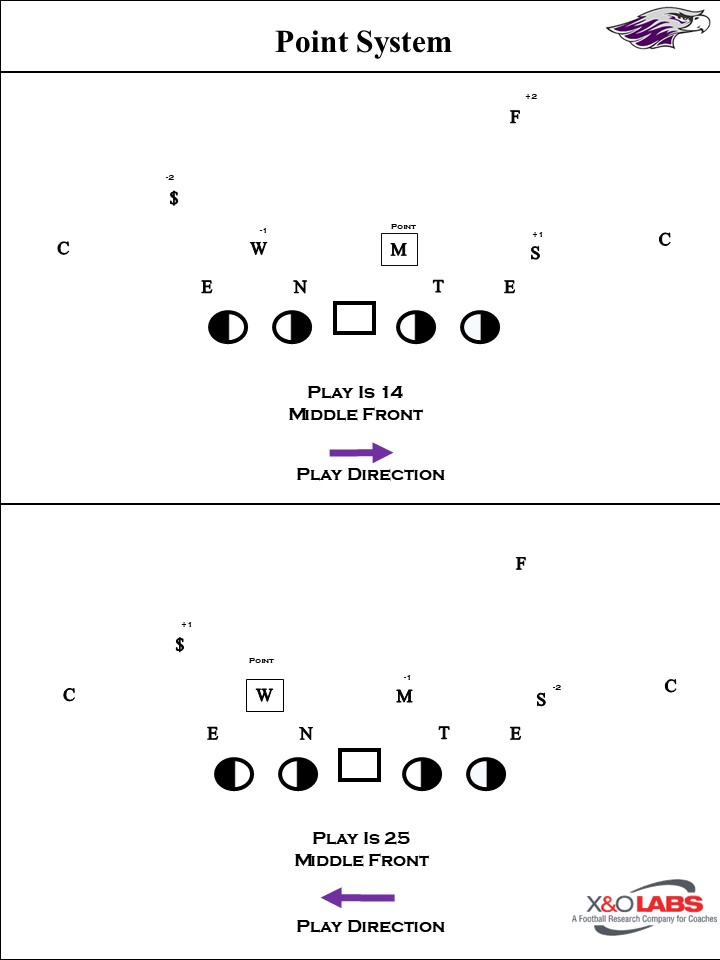 "We call it a zone scheme but in our system, it's really a man scheme," he said. Coach Jennings did tell me that they will push the point against Odd because they won’t get vertical movement. “Tight zone vs. Odd puts the frontside linebacker in a bind in 50 split but he can get beat,” he said. “He can get stuck in a 50 tech waiting to see if the RB cuts back. The 4i is a two-gap player and if he gets beat the RB can jump cut it frontside.”

The proper step depends on the aiming point. It can be a drop step or a zone step. Whatever step is needed to hit the aiming point of the frontside number. But whatever the front step does, the second step must be in the ground as quickly as possible.

Things to know for the OL:

“In our league, we end up seeing a lot of different defensive fronts,” said Coach Jennings. So to try and keep identifying fronts as simple as possible he uses 4 basic families: Even, Pro, Odd, and Bear. 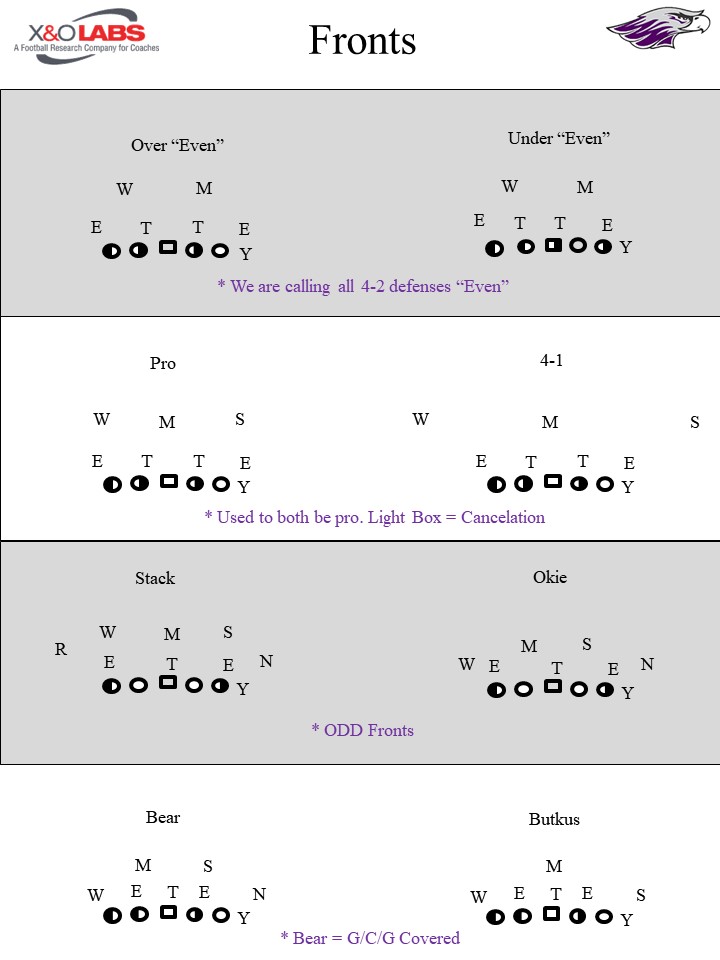 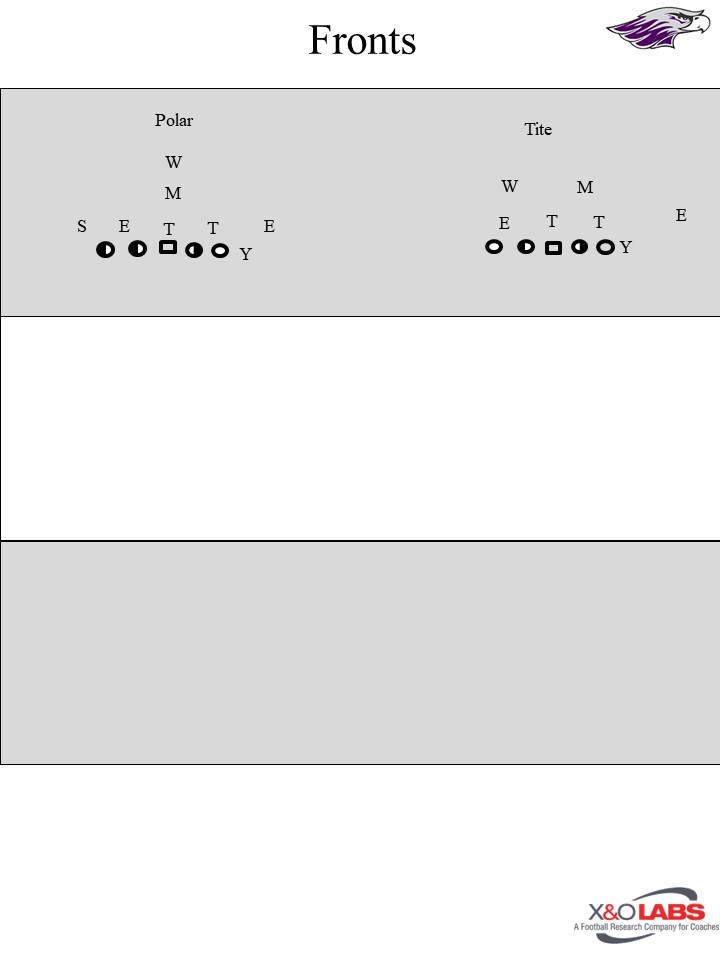 The running back is responsible to identify the front and echo the structure to the wide receivers. That will change the count on the perimeter for wide receivers to block, be it the Sam linebacker, Sky Safety, etc. In the Odd front, the aiming point is the frontside leg of the Guard. In the Even front, the aiming point is the trail leg of the play side Guard. When in Pistol alignments, the play is widened out to the B gap or inside leg of the Tackle. “We just give them a framework and go,” said Coach Jennings. “They need to be responsible for setting up the frontside LB with their path but make a cut off the Guard’s ass on what the Will is doing.”

The slot receiver in zone read is asked to step to the heel of the defensive lineman, rip and put him on his back. When you watch the film it looks like a butt block, but Coach Jennings calls it a “turtle shell”. “We put ourselves between the ball and the defender like a box out in basketball,” said Coach Jennings. “If you watch enough football you watch that slot work his tail off to get on his near shoulder and push the Sam- who can make the play- into the pile.”

Things to know for the WR’s:

Things to know for the QB:

Below are how the Warhawks block each of the following fronts in its zone read concept: 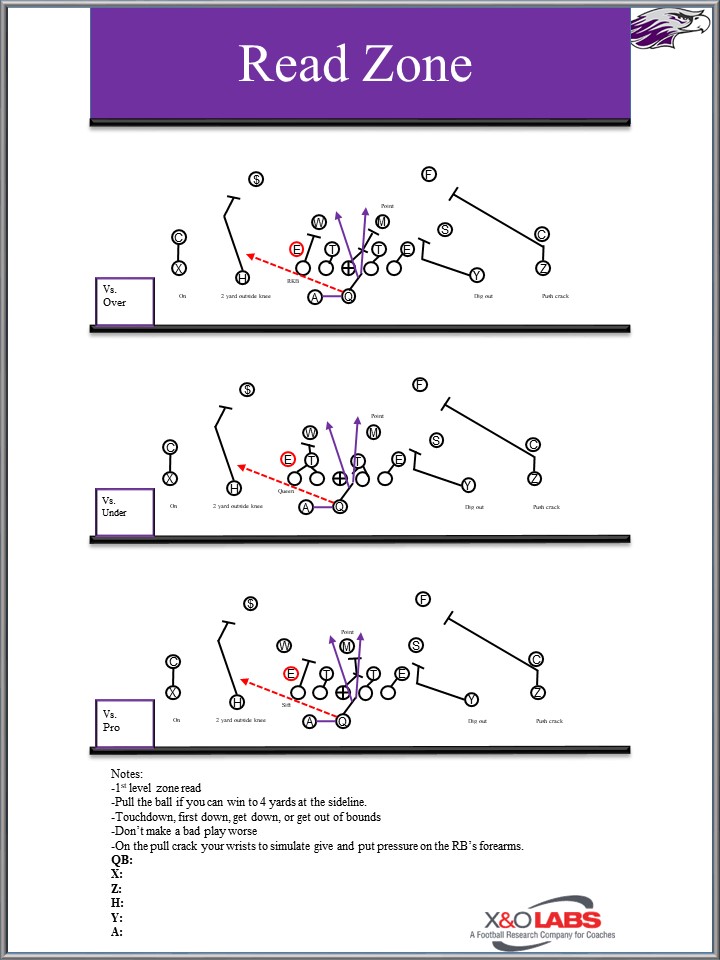 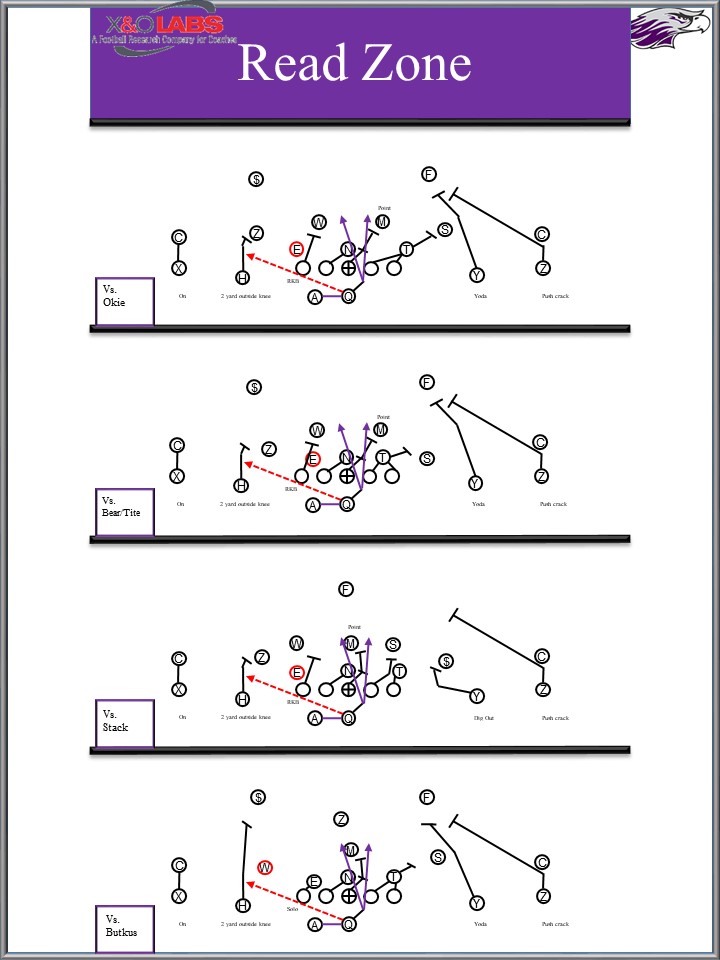 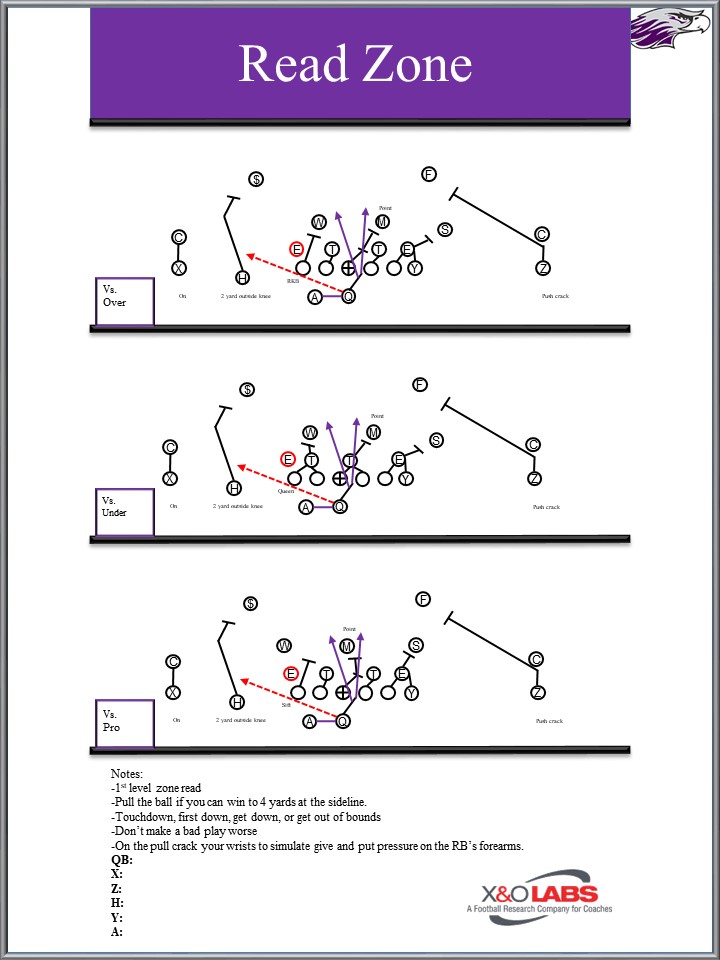 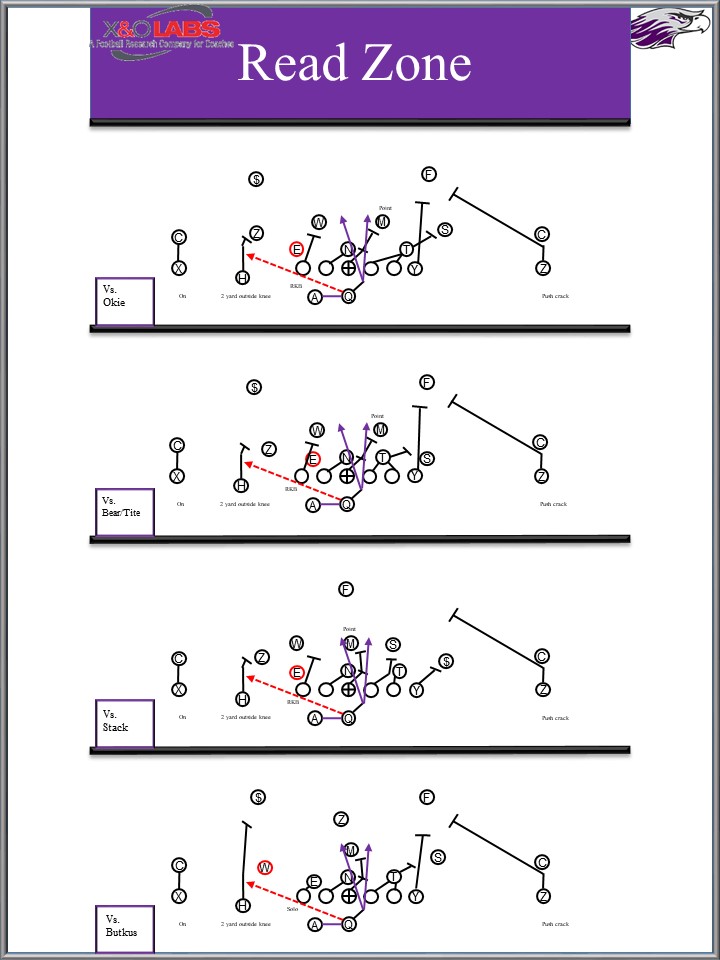 The focus of the rest of this report is solely on how Coach Jennings teaches the backside Tackle to identify and block the “minus one” defender on the backside of the scheme.