Nicholls State knew they had a stud at quarterback, so they were going to use him. The tight zone has always been a foundation for in offensive coordinator Rob Christophel’s menu, but as defenses continued to pack the box, he allowed his quarterback the freedom to pull it. And as the prototypical scrape exchange started to take shape with first and second level defenders, he had to find other ways to make sure his athletic quarterback can carry the ball.

For Coach Christophel it all starts on whether or not a defense is plussing or minusing its interior linebackers to the read or zone side. The backside tackle is responsible or sifting to the -1 the from the point. The Y is responsible for blocking any scrape exchange, but many times that seventh defender will come from the second level. His role is to wrap to the inside linebacker to the alley defender. If the there is any rock back at the second level, the Y blocks the linebacker.

And since so many even front operations are field strength oriented, the open B gap will be to the read side. 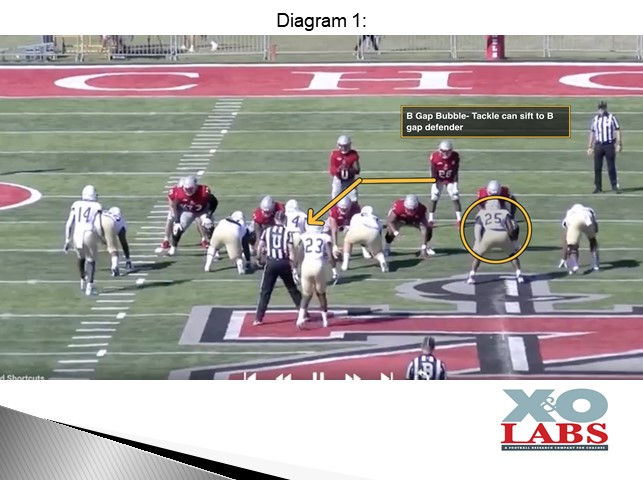 Having the 3-Tech to read side does make it tougher because the Tackle doesn’t get a clean run through to -1.  But in either case, the Y is looking to seal the -1 to the high safety.  “The backside Tackle knows whether or not he’s getting help from the tight end coming across the formation,” said Coach Christophel. “If there is no tight end help, the Tackle will U the backside linebacker and work to him. If he does have tight end help, he will not chase the backside linebacker. Either way we want to make the defensive end tackle the dive.”