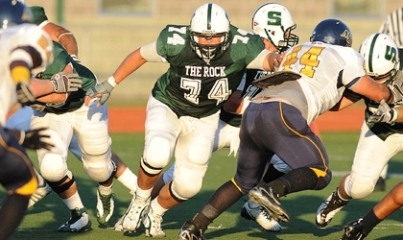 “It all starts with the inside zone,” is a reoccurring coaching maxim that we’ve heard over the last decade.  The inside zone is often the first concept installed on the first day of spring and summer camp every season.  It’s a physical, downhill run scheme that relies on the vertical displacement of defensive lineman and linebackers at the point of attack, giving the running back an opportunity to find an exploit open gaps for yardage.  Yes, we got all that.  We know the scheme, but do we know the best way of teaching it?

Ask most offensive line coach and they will tell you that the zone run game may be the most sought after topic of conversations at clinics.  Questions like:  Where do you like to run the scheme? How do block combinations?  When should you come off linebacker depth?  What does the back read? bombard these coaches on the clinic circuit.  So, these were the same questions we sought answers to in this special report.   The fact is 40.9 percent of coaches use the inside zone scheme for nearly 26-50 percent of their offensive run game.  That means one out of every four runs is the inside zone.  Not surprised?  Well, neither were we.  Naturally, a scheme that is utilized by over 75 percent of the programs in the country should have plenty of resources to tap into and that’s exactly what we did.  We found that 42.7 percent of coaches say they averaged between 5-6 yards per carry on the inside zone and that was the majority.  We were curious to find how different these were running the scheme and what they were doing to give them that rate of efficiency.  So we went right to the source, probing the coaches that told us why they were successful.

Before we present our research it should be pointed out that this special report is more centered on the techniques, not the schematics of the inside zone run game.  Again, we all know about the schematics inside zone- we’ve been hearing about it for decades- this is more about how to block it.

Ball Carrier on Points of Attack and Reads

Because so much of the success of the inside zone is predicated on the displacement of linebackers, we thought it necessary to present information on the play of the running back.  After talking with so many offensive line coaches when researching this project, there were plenty who talked about how the running back can often make or break the play.   While it should be noted that many coaches teach the inside zone as a cutback play, according to our research 45.2 percent of coaches say the front side A gap is the most used point of attack in the inside zone scheme (Diagram 1).   Longtime NFL coaching veteran Jim McNally is one of those coaches who prefers to run the tight or inside zone right up the butt of the Center to the play side and believes it’s the back’s job to “cram it up in there” without hesitating. 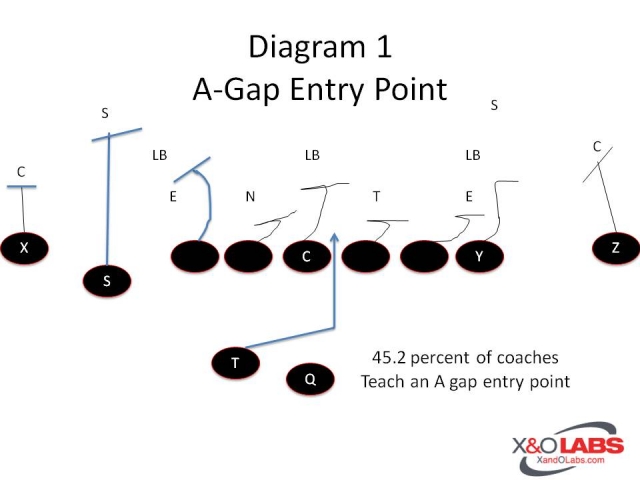