This case is focused on the techniques that are taught when combination blocking the inside zone scheme.  These are used when two offensive players are responsible for blocking two defenders.  Before we start to address the “how” used by coaches to teach this technique, we’ll start with how lineman are taught to identify the “who” to block.

Many coaches put a premium on identifying the leverage of the second level player that the combination will be working up to.   Lineman need to not only identify the linebacker they are working to, but also understand where that player is situated the footwork needed to get there.  Jeremy Darveau, the offensive line coach and offensive coordinator at Southwest Minnesota State University, is one of those coaches that educate his players frequently on the location of linebackers.  Darveau talks about a “Plus” and “Minus” leverage point for linebackers.  A plus alignment refers to the play side linebacker being “plussed” over, which means wider from the box (Diagram 1).  In this situation, Darveau schools his play side offensive lineman to expect to climb to linebacker level while he tells his backside offensive lineman to sell out to reach the down lineman because of the little chance of him climbing to linebacker depth.  In order to teach the reach, Darveau uses a bucket step, which he calls six inches off the line of scrimmage and eight inches width.  “We want to cover the width of the defensive lineman with the depth of the first step,” was Darveau’s coaching point.    “We are going to expect more of a stretch here,” Darveau told us.  “They really don’t need to get off the double team because there is a good chance that 3-tehnique will spike into the A gap and the Center will wind up taking him over.   In a minus alignment (Diagram 2) the linebacker is tighter to the box.  This would essentially, switch the roles of the lineman.  The backside offensive lineman should now be prepared to climb to linebacker depth while the play side offensive lineman should be aggressive with his second step to get vertical displacement.   In this situation, Darveau teaches more of a flat step to his uncovered offensive lineman because of the probability of getting more of a vertical, not horizontal push.  Darveau’s flat step is what he calls enough of a first step to get to outside framework of covered defender.  It’s an aiming point of the play side number in 7-9 inch area.  “He must stay square in that situation,” said Darveau. 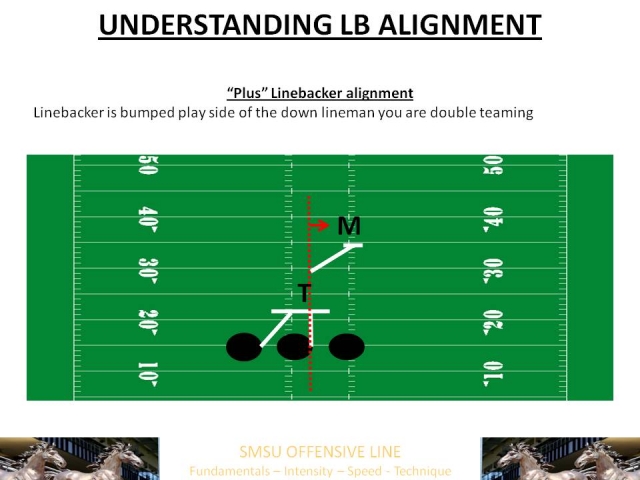 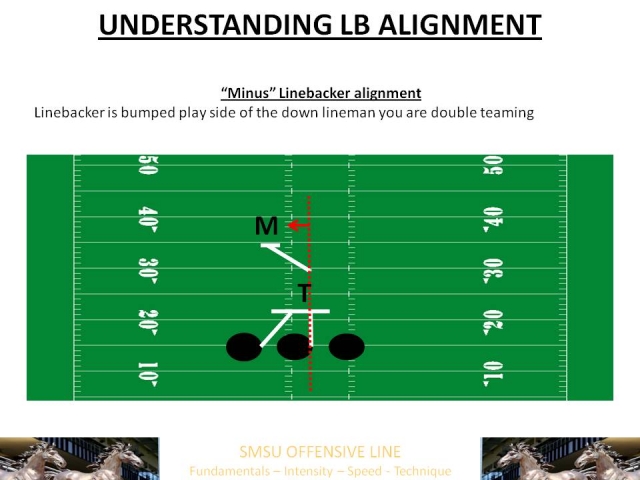 There are two main drills that Darveau uses to teach his offensive lineman block linebackers in space.  One of these drills that Darveau organizes is what he calls Sack Draggers.  It teaches lineman to be able to play with a great base while moving laterally.   The points of emphasis of the drill are below (Diagram 3). 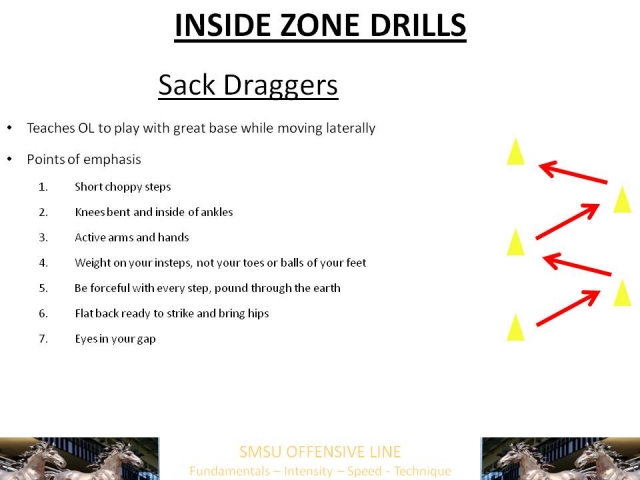 To see video of the Sack Draggers Drill, click on the link below: