Inside Zone: Case 2 – 1 on 1 Block Fundamentals and Techniques 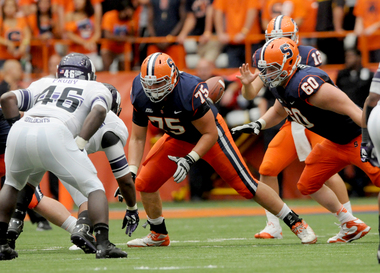 Since there can be several examples of what a “covered” lineman is, we will detail the following examples of what a covered lineman can be.   We’ve found that the technique of these covered offensive lineman can change based on the alignment of the defender. Although the pre-snap leverage of the defender may change, as it relates to footwork, we’ve found that 36.1 percent of coaches teach the far number (or widest number) of the defender as a visual landmark in inside zone schemes. 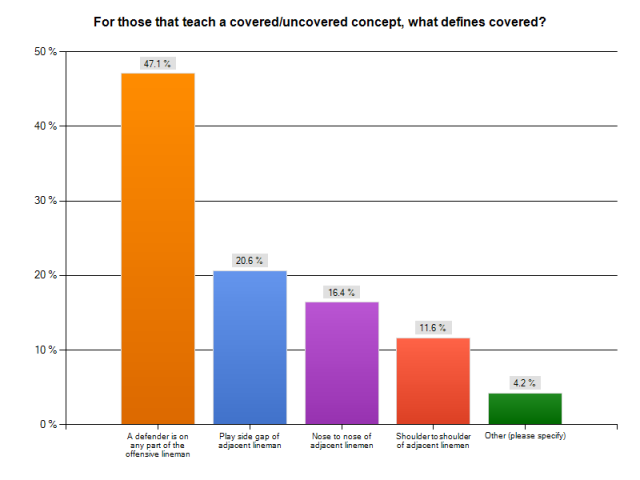 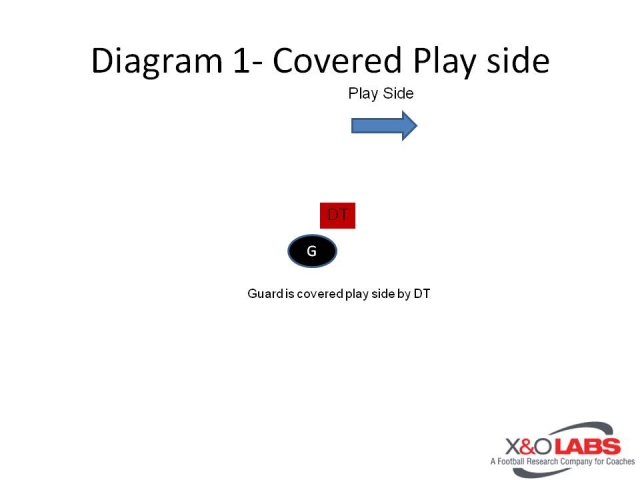 The Double Under Technique is a relatively new technique- we’ve found it to be around four years old- that many higher level coaches are starting to teach to their players.  We first heard the technique discussed by well-reputed Penn State offensive line coach John Strollo.  By definition, the double under technique is a tight elbows, double under lifting motion (with palms up, not thumbs out) strike.   Jim McNally calls it a “fish bowl” strike, to simulate picking up a fish bowl with both hands under the bowl.   Although the visual aiming point may change, former NFL coach Bob Wylie tells his players to put their helmet one inch outside the sternum of the defender when executing this block.  “ We tell them they will never usually get one inch outside the sternum so they wind up getting their helmet on the play side number,” he told us.  “If I tell them to put the helmet on the inside number, it may wind up on the outside number.” “The shorter the steps the better,” said Wylie.  “It becomes a tight elbows, double under lifting motion.  We’re trying to get underneath him, but we want both feet on the ground on contact.  “When you strike, your feet keep going and it’s a lifting action.  You want to keep your momentum going further.  The farther you turn your thumbs out, the stronger you feel.  You’re trying to hit him with the bottom part of your hand.  You may not get that but if you may get it. You can tell where you’re elbows are.  If you don’t see any light between the elbows and body, it’s a pretty good chance the hands are where they need to be.”

Jim McNally is a huge proponent of the double under technique.  In the video below, he describes the technique and the drills that correspond with it.

Note: This video was granted with permission from of the School of the Legends. You can find other technique related videos by visiting their website http://www.sotl.com.